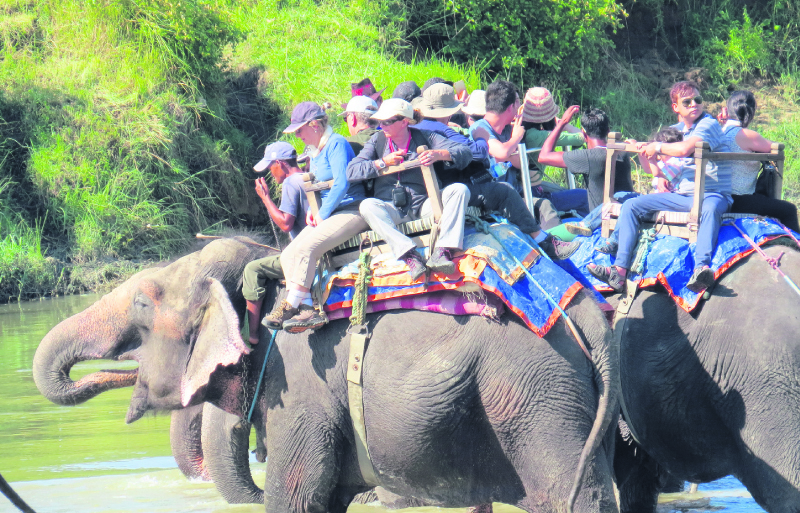 CHITWAN, July 20: The tourism sector of Chitwan had been showing signs of recovery during the last fiscal year -- that ended last week -- from a slump resulting from the earthquake and border blockade of 2015 and subsequent energy crisis.

The devastating earthquake of April 25, 2015, the Madhesh movement in the same year following the proclamation of the constitution, the unofficial blockade of India, and subsequent energy crisis affected the whole tourism industry of the country. And Chitwan was one of the worst hit districts.

Chitwan, one of the major tourist destinations of Nepal, saw the tourist number fall to 87,391 in Fiscal Year 2015/16. In the previous year -- 2014/15, the number was 178,257, which was the highest number of tourists in the history of Chitwan National Park, officials said.

After showing some signs of recovery, the Chitwan hotels are now facing another problem -- the miserable condition of Muglin-Narayanghat road section that is under construction.
The number of the guests has fallen due to the condition of the road, according to the hoteliers of Chitwan.

Most of the visitors to Chitwan prefer to travel by road than to take a flight. Most of them come from Kathmandu and Pokhara.

“Most of the tourists take the road. Around 80 percent of our guests are from Kathmandu and Pokhara. The miserable condition of Muglin-Narayanghat road section has halted guest flow,” said Damodar Regmi owner of Hotel Nature Heritage who is the member of Regional Hotel Association Sauraha.

“Generally 20-25 percent hotel rooms used to be booked in June-July. But because of the road condition, not even two-three percent of hotel rooms has been booked,” Regmi said. He said that the tourist buses are now sitting inside the garages.

President of Regional Hotel Association Sauraha, Suman Ghimire, who is also the owner of Jungle Safari Lodge of Sauraha, said that the tourist arrival has decreased due to the blocked road.

He said the situation of Sauraha would become worse if the condition of the road could not be improved immediately.

The ongoing construction works for the widening of the Mugling-Narayanghat road at has severely affected transportation in this section.

It takes several hours to cross the 36 kilometers of the section. Landslides along the road makes the situation worse.

Chitwan National Park is a major tourist attraction due to some rare animals such as one-horned rhino, royal Bengal tiger among others. Tourists visit Chitwan for elephant safari, to watch the rare animals and birds, to see the Tharu culture, and enjoy boating along the Rapti River.

After Kathmandu and Pokhara, Chitwan is the third major tourist destination of the country.

RATNANAGAR (Chitwan), Sept 2: The Muglin road has been obstructed since early morning today after a landslide at Kalikhola area... Read More...