INGOs spent Rs 23b in 22 tarai districts in a year 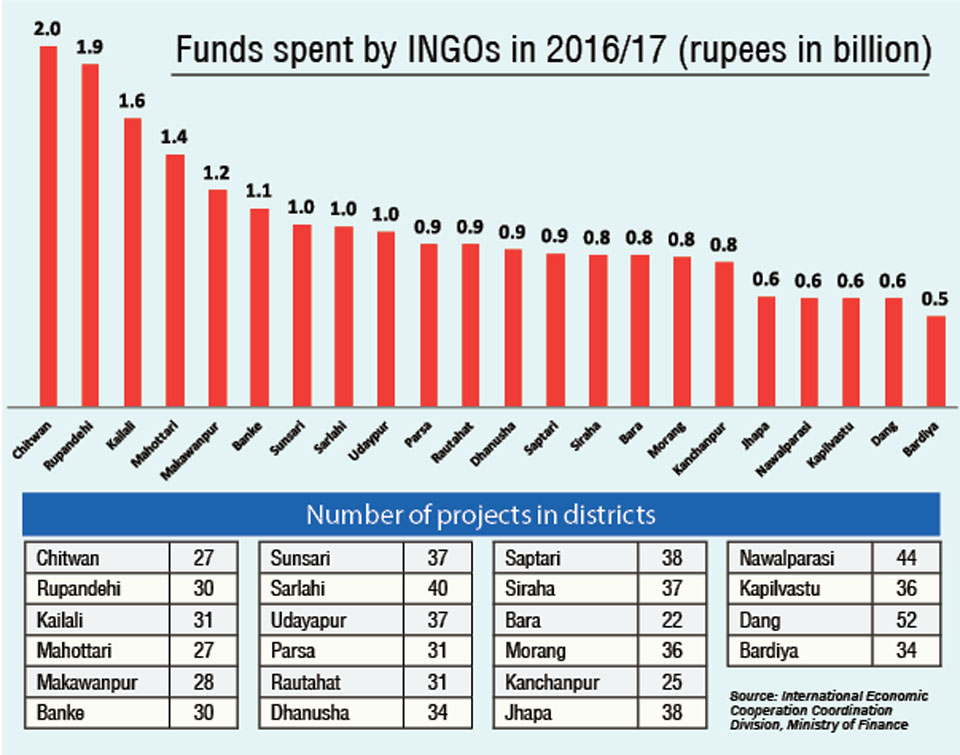 KATHMANDU, July 17: Over Rs 23 billion was spent through various INGOs in the 22 tarai districts of the country during  fiscal year 2016/017, it is learnt. A total of 74 INGOs had channelled Rs 23.85 billion  through 745 projects in the tarai, which includes the country’s southern plans from Jhapa district in the east to Kanchanpur in the west.

According to the International Economic Cooperation Coordination Division under the Ministry of Finance, most of the budget was spent on awareness generation, religion conversion, health and education.

Political analyst Tula Narayan Shah, who has been closely observing Madesh issues, said “Although we cannot generalize  that  the INGOs are involved in wrongdoing, their continuous monitoring is a must.” He was quick to praise some of the work and contributions of the INGOs, including in the  empowerment of women, Dalits and other groups.

“However, there are also those who  indulged in financial irregularities. Their work involves constructing small waterways while they swallow up the budget of irrigation canals,” Shah added, stressing  the need to tightly monitor  INGO activities.

There are 26 USA-based INGOs present in the districts of the tarai, followed by 14 INGOs based in the UK, four each from Germany and Switzerland and one belonging to Saudi Arabia.

In just eight districts of the region - Chitwan, Sunsari, Mahottari, Sarlahi, Makawanpur, Rupandehi, Banke and Kailali - the INGOs have spent around Rs 1 billion each. Six of these districts have seen expenditures crossing a billion.

The maximum expenditure is in Rupandehi, amounting to Rs 1.91 billion, while the least  among these districts is in Bardia, where  the total expenditure is Rs 540 million.

The INGOs involved include Dan Church Aid of Denmark, Lutheran World Relief of USA, Safer World of UK, Back to Life of Germany, Eye Care Foundation of the Netherlands and Ostomy Foundation of Norway.

Dolendra Niraula, joint secretary at the Ministry of Women, Children and Social Welfare, said the activities of INGOs have been under constant monitoring. “District Coordination Committees and District Administration Offices will monitor their activities in coordination with independent experts and auditors.” INGOs ignoring government guidelines  will face action, including the scrapping of their registration, he added.

KATHMANDU, March 23: Even as nearly all polling stations in the tarai plains remain susceptible to election-related violence and possible disruptions,... Read More...

Let's not overshadow the issues that Prem Archaya tried to raise: Dr Toshima Karki
25 minutes ago