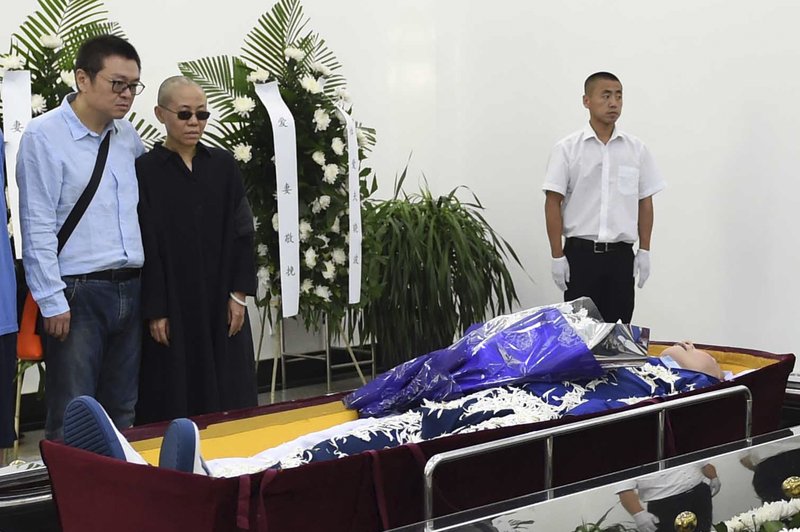 SHENYANG, July 15: China cremated the body of imprisoned Nobel Peace Prize laureate Liu Xiaobo, who died this week after a battle with liver cancer amid international criticism of Beijing for not letting him travel abroad as he had wished.

The government of the city of Shenyang in northeastern China, where Liu had been treated for advanced liver cancer, said in a briefing that the cremation took place early Saturday morning in a ceremony attended by family, including his wife.

Liu died Thursday from multiple organ failure that followed a battle with liver cancer while serving an 11-year sentence for incitement to subvert state power. He was 61.

The briefing, at which officials also provided images of the funeral, was the latest in a tightly orchestrated Chinese government propaganda campaign seemingly aimed at countering criticism that Beijing has failed to handle Liu’s case in a humanitarian way. A video about Liu’s hospital treatment released on the website of the city’s judicial bureau Friday appeared aimed at the same objective.

The wife and other family members of China’s best-known political prisoner have been closely guarded by authorities and remain largely out of contact with the outside world even after Liu’s death. Governments around the world have urged China to free Liu Xia from the strict house arrest she has lived under for years even though she has not been convicted of any crime.

The handout images showed Liu’s wife, who wore dark sunglasses, being comforted by her brother in a funeral parlor as they stood in a row with Liu’s older and younger siblings and their wives. Liu’s body lay in an open casket in the center of the room, surrounded by an arrangement of potted white flowers.

A black banner strung on the wall said “Mr. Liu Xiaobo’s funeral” in white Chinese characters. It was positioned above a framed picture of Liu. A press release issued by the government said the ceremony was held at 6:30 a.m. to the music of Mozart’s Requiem and that the body was cremated shortly afterward.

The government also said the couple’s friends attended the ceremony, a claim that was disputed by people who have long been close to Liu. In the handout images, none among a group of people standing by the casket were identifiable as any of Liu’s friends, said Mo Zhixu, a dissident writer who is friends with Liu.

“Not a single one of his real friends were there,” Mo said by phone, adding that he thought the well-built young men with buzz cuts in the photos resembled security agents who kept track of Liu’s wife. “This is just a big performance.”

“This regime has long been acting without humanity, that’s why they denied him even a minute of freedom even until his death. I have nothing to say other than that I’m extremely infuriated,” Mo said.

In Shenyang, a spokesman for the city’s information office said at the briefing that authorities were looking out for Liu Xia’s interests and insisted that she is free.

“As far as I know, Liu Xia has freedom. But she just lost her relative and is in deep sorrow,” spokesman Zhang Qingyang said. “After Liu Xiaobo’s death, let Liu Xia tend to his affairs and try to keep her away from external interference.”

Liu was only the second Nobel Peace Prize winner to die in prison, a fact pointed to by human rights groups as an indication of the Chinese Communist Party’s increasingly hard line against its critics. The first, Carl von Ossietzky, died from tuberculosis in Germany in 1938 while serving a sentence for opposing Adolf Hitler’s Nazi regime.

Tributes have rolled in from around the world to mourn Liu, but there is little mention of him in China’s heavily-censored state media and social networking platforms. One notable exception is a newspaper published by the ruling Communist Party which on Saturday said the West was “deifying” Liu, a man the paper described as a criminal who was “paranoid, naive and arrogant.”

“Liu’s memorial tablet cannot find a place in China’s cultural temple,” the Global Times newspaper said in an editorial. “Deification of Liu by the West will be eventually overshadowed by China’s denial of him.”

The newspaper’s editorial marked a rare mention of Liu in the Chinese-language media, possibly indicating a desire to guide popular opinion amid widespread reporting of his death in the overseas press and on social media platforms such as Twitter that are blocked in China.

While Liu did have considerable renown abroad — official censorship made him virtually a non-person at home — the party frequently uses the specter of Western manipulation to demonize its critics.

Liu rose to prominence during the 1989 pro-democracy protests centered in Beijing’s Tiananmen Square, and became one of hundreds of Chinese imprisoned for crimes linked to the demonstrations after they were crushed by the military. It was the first of four imprisonments.

His last was for co-authoring “Charter 08,” a document circulated in 2008 that called for an end to one-party rule.

He was in prison when he was awarded the Nobel in 2010, which Beijing condemned as an affront to its political and legal systems.