Indian embankment threatens lives on Nepali side of border 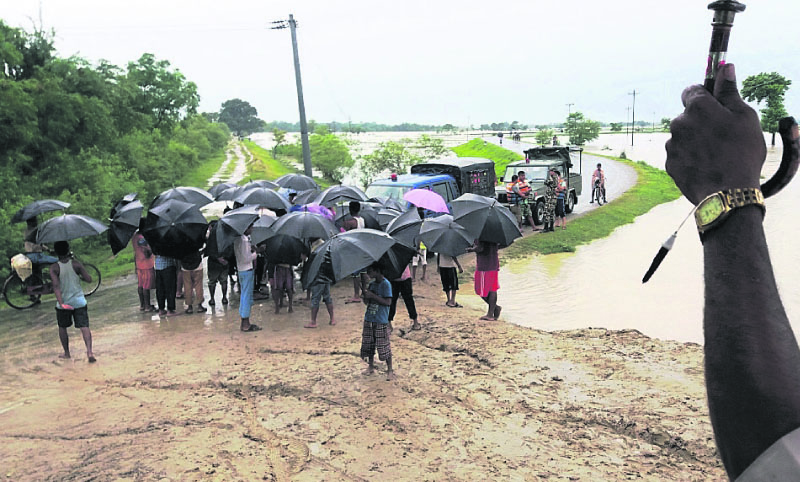 TILATHI, July 3: Sudden floods in the Khando and other rivers on Saturday inundated over a dozen villages in the northern and southern areas of Saptari district. Only on Sunday morning did the floods subside and the locals attempted restoring their lives back to normalcy. However, terror and fear among the locals in those areas still remain.

Around 400 houses in the southern areas such as Sakarpura, Tilathi, Belhi, Rampuramlaniya, along with other villages still remain affected by the floods The traumatizing situation brought by an early monsoon has instilled deep fears in the minds of the people as they anticipate the worst during peak monsoon, according to Dineshwar Mishra, former VDC secretary of Tilathi.

“The Khando River has been affecting Tilathi and other southern areas in this way for the last four decades,” said Mishra, who had served three terms as the VDC secretary of Tilathi until the recent restructuring of the country as per the federal structure. “Living in constant danger has become our destiny during every monsoon. This year is no different. As usual, the government only remains a mute spectator.”

The constant danger of floods is due to the forceful construction of an embankment along the Indo-Nepal border by India, which claims to consider Nepal as a close ally. About two decades ago, the Indian side had built a three-kilometer embankment in Kunali along the border, enclosing rivers. The artificial structure has prevented natural flows in the rivers in Rampura, Malhaniya, Sakarpura, Koiladi, Launiya, Tilathi, Hanuman Nagar along with other places.

“Three rivers - Khando, Mahuli and Jeeta - which flow towards India from Nepal - have been redirected from their natural courses due to the Indian embankment. The artificial structure has forced the rivers to redirect their courses to the Nepali side,” said Anjani Kumar Das, a local. Since then, the lives and properties on the Nepali side of the border have been at constant risk.

Locals residing in the Nepali and Indian sides of the border had once clashed at Das Gaja (No Man's Land) in Tilathi over disputes on the creation of the embankment. However, the administrations of both sides have not bothered to resolve the issues after the incident, Yadav said. This has forced the locals of Saptari to live under constant fears of being washed away by massive floods every year during monsoon.

Saptari's Chief District Officer (CDO) Krishna Bahadur Katuwal said the government has created budget this year for the control of floods in the Khando River. “However, obstruction from the locals of Tilathi has created difficulties in constructing embankments on both sides of the river,” he claimed.

Locals countered CDO's claim by stating that the government's embankment proposal would displace them as it requires them to give up almost 1,000 bighas of land, according to Ram Lakhan Yadav, coordinator of the Khando River Struggle Committee.

NEW DELHI, Sept 3: Police rescued 22 Nepali women from a hotel in New Delhi who were allegedly being trafficked... Read More...