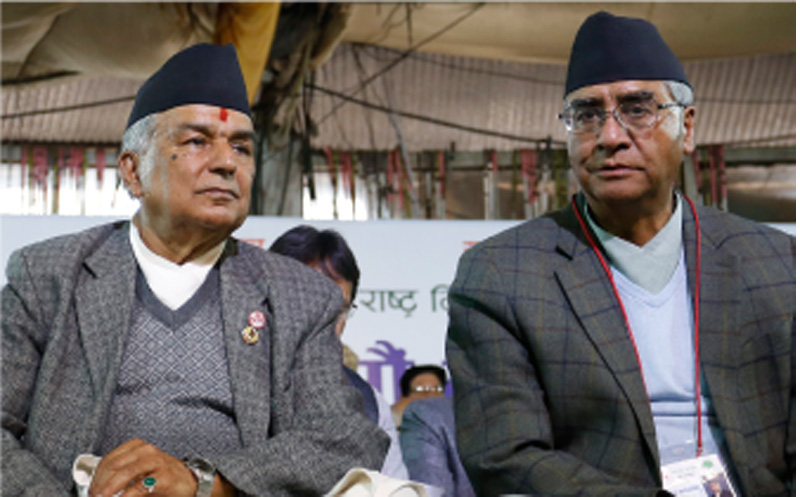 BP and his Congress party prevailed in the 1959 general election, winning 72 of 109 seats. Congress won nearly all its seats in Madhes
In the course of my search for early history of Nepali Congress, I read D.R. Regmi’s treatise on Rana regime, A Century of Family Autocracy in Nepal published in 1950. After a comprehensive review of public life under the Ranas (1846 1950), Regmi devotes some 40 pages towards the end of the book to emerging politics in Nepal after the end of the Rana Rule.

In his review of early 1940’s, Regmi mentions underground parties such as Praja Parisad, Praja Panchayat, Nepal Democratic Congress and Nepal National Congress but not Nepali Congress. Regmi talks about emerging leaders of this era including Man Mohan Adhikari, Pushpa Lal Pradhan, Gopal Prasad Rimal, and Tripurbar Singh but he doesn’t write about BP Koirala who later led public opposition against the Rana rule, ultimately leading to its overthrow in 1950.

The intent of the preceding snapshot is to show that early opposition to Rana rule was limited to a few dozen elites in Kathmandu and hadn’t taken the shape of a national movement. The evidence of this limited reach of anti-Rana politics during those early days is that each opposition to Rana rule in the 1940s died out with the arrests of no more than a dozen activists, most of them working underground.

National politics involving activists all around the country was first started by Nepali Congress led by BP, with the help of some of his eminent democratic allies like Krishna Prasad Bhattarai, Geneshman Singh, Surya Prasad Upadhaya and Meghnad Upreti. A larger fact about the evolution of Nepali Congress in its early days was that its center of operation was Madhes—particularly its eastern city of Biratnagar, home to the revolutionary Koirala family.

After making his debut in Nepali politics in the early 1950s as leader of Nepali Congress, BP relied on Madhesi support to advance his national agenda, with only meager of  support from elsewhere in the country, including in Kathmandu Valley. In the Madhes region, BP chose capable leaders as his lieutenants in order to take his message to the public, which was in favor of democracy and good relations with India.

BP relied on figures like Ganeshman Singh and Suburna Shumsher to get a foothold for his party in Kathmandu and the hills but found it difficult to override the influence of Rana loyalists and leftist intellectuals. In particular, several communist-leaning groups had emerged to oppose the hegemony of India and they soon labeled BP and his Congress colleagues as Indian lackeys.

Nonetheless, BP and his Congress party prevailed in the general election of 1959, winning 72 of total 109 parliamentary seats. Congress won almost all its seats in Madhes, giving BP’s party a super-majority in parliament. BP and Congress party’s appeal among Madhesi electorates appeared limitless that saw a complete rout of Madhes-based parties and Madhesi leaders. Most prominent of these leaders—Vedanand Jha of Tarai Congress and Bhadrakali Mishra of Praja Parishad—even lost their security deposits for not winning minimum number of votes.

There was massive unease among traditional power elites in Kathmandu of Madhesi dominance of Congress and, indirectly, of democratic politics which, possibly, was the reason King Mahendra ousted Congress government in December 1960, after just 18 months in office. That BP’s dominance of national politics wasn’t welcomed in Kathmandu and in hill regions was evident from people’s reaction in Kathmandu, who lighted their homes to celebrate the demise of Koirala government.

And there was the India factor. Congress and BP were perceived as too closely aligned with India and that didn’t seem safe for nation’s sovereignty. Concerns about pro-India leanings of BP government were reflected in King Mahendra’s quick move to demonetize Indian currency, disallow teaching of Hindi in public schools, stop Hindi language broadcasts from public radio, order Indian security forces to leave Nepal-China border, and start building a super-highway to connect East and West ends of the country without crisscrossing Indian territory.

Democracy was finally restored in 1990 after a 30-year battle to end the king’s direct rule. However, much damage had been done during the long interval of absence of democracy, which also gave time for communist ideology and populist support for communist leaders to take hold. More significantly, the 30 years of king’s rule turned Madhes territory into an occupied enclave. Along with this transition, Congress lost much of its electoral support in the region, coinciding with the ascendancy of communists and emergence of divisive politics in Madhes.

Congress won a majority vote in parliament in the 1991 general election—the first since 1959—but the party had been robbed of its inner strength that had earlier been nourished by Madhesi votes. A sad part of the waning of Congress strength was the leadership of Girija Prasad Koirala, who became prime minister in 1991. He completely abandoned Madhesi voters and forgot about the deep bond that BP had created by presenting himself as a Madhesi leader who prioritized the accommodation of Madhes and who openly praised his Madhesi colleagues in the party.

By comparison, Girija Prasad chose to distance himself from Madhesi public and made little effort to win the trust of Madhesi voters. More than anything else, alienation of Madhesi voters has hampered Congress in its competition with other parties. In particular, given growing unpopularity of NC in Madhes, it created a sort of an unmovable barrier for the party to get a majority in parliament.

Coming to the present day, new Prime Minister Sher Bahadur Deuba needs to know this history and learn a thing or two from the past. This will help him salvage his party—Nepali Congress—from further slide and even its possible dissolution, what with the growing spread of communism and the country’s recent warming of relations with China.

With continued grip of its feudal past on Kathmandu’s population and communist sympathies of its left-leaning intelligentsia, the outlook for Congress in the valley is dim. Looking to hill regions, there is continued hold of Congress in some western districts adjacent to Kathmandu. But much of the hill regions have become unassailably aligned with UML and Maoist parties.

Aside from these communist strongholds, most of the country—particularly the large swaths of Madhes region—remains sympathetic to Congress but its influence is fast eroding. There is a strong perception that NC’s political loss in Madhes will progressively turn the country over to communism and to left-leaning feudalism.

A salvaging point is that NC faces no major challenge in retaking of Madhes that contains as much as half of the country’s voting public. Winning over Madhes is not as difficult as generally perceived, as ideologically there is nothing substantive that alienates Madhesis from the party, with the clash of interests between the two sides mainly originating from NC’s abandonment of Madhes.

In recent times, Congress has offered no negotiating platforms to listen to Madhesi protestors. Instead its officials have ordered police to fire on unarmed crowds. Most of the firing deaths occurred during the first round of protests in 2006-07, when NC’s Krishna Prasad Sitaula was the home minister. For Madhesi public, Sitaula is remembered as a butcher, in the manner of Pakistan’s Tikka Khan who butchered Bengalis in early 1970s during their war of Independence.

Nonetheless, there are more things that bind Madhesis and Congress than divide them. Both sides are committed to democracy and to free enterprise. Where they differ, in the main part, is with regard to citizenship rights and equal opportunities for Madhesis.

Should Congress leadership come clean on these two, all acrimony and mistrust between them will disappear and be replaced by mutual trust and goodwill. This will help Congress return to the glory days of BP Koirala with the unbound approval of Madhesi public, while Madhesi parties will close ranks with Congress or go out of business.

BANEPA, Nov 25: “It is a unique style of oil massage which strengthens the body and mind of a newborn.... Read More...

TB has quickly been forgotten in rich countries, where it is thought of as a relic from the Victorian era. Read More...