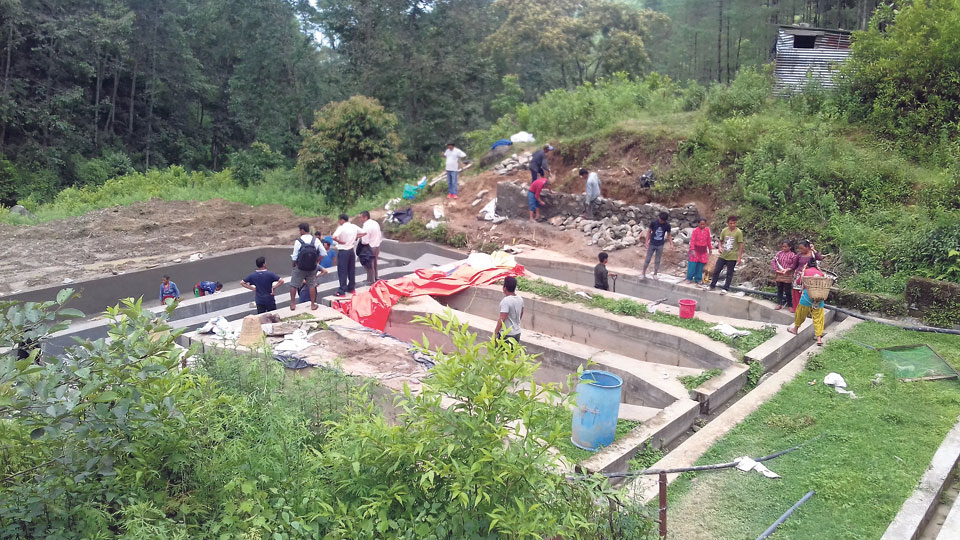 NUWAKOT, June 27: Farmers of Nuwakot are becoming attracted toward Japanese rainbow trout farming again after some villages in the district were selected for the 10-year Prime Minister Agriculture Modernization Project.

The project has selected the then Madanpur, Kakani and Okharpouwa village development committees (VDCs) and other surrounding areas as a block for rainbow trout farming. As the project provides different subsidies, farmers in these villages are busy digging ponds.

The project has energized farmers who were preparing to leave the profession that they started some 15 years ago due to flood, landslides and the earthquakes of 2015.

As the project is subsidizing 50 percent of the investments, existing farmers as well as youths are digging ponds. The project has allocated a total of Rs 26 million for helping farmers to build fishponds, produce feed, and even procure vehicles to take their products to the market, according to Sonam Tamang, the owner of Sosod Rainbow Trout Farm in Chahare of Kakani Rural Municipality.

Daman Lama, president of Block Committee of Prime Minister Agriculture Modernization Project, said that over two dozen farmers are investing millions of rupees to start rainbow trout farming in land which is not suitable for other crops. “What is encouraging is youths returning from foreign jobs have taken initiative to develop the area as the destination for rainbow trout,” he added.

Kamal Raj Gaire, chief of District Agriculture Development Office (DADO), Nuwakot, said that the project has been trying to bring farmers, who are on the verge of leaving their profession that they started decades ago due to floods and earthquakes of 2015, on board the plan to revive rainbow trout farming in the area. “As this is a 10-year project, it will support the farmers to build fishponds, produce fish feed and manage water sources. DADO Nuwakot will provide all possible help to the farmers,” he added.

Local farmers say production will be satisfactory as the area is suitable for rainbow trout farming.

Meanwhile, Nuwakot Chamber of Commerce and Industries (NCCI) has started a feed industry in Betini of Belkot so that farmers do not have to go faraway places to procure feed. Madhusudan Thapaliya, member of NCCI, said that the local chamber has also prioritized rainbow trout farming.

MYAGDI, July 10: Farmers in Myagdi district are attracted to sheep farming these days due to its low investment and high... Read More...

Federal Democratic Republic came through the sacrifices of martyrs: PM Dahal
8 minutes ago