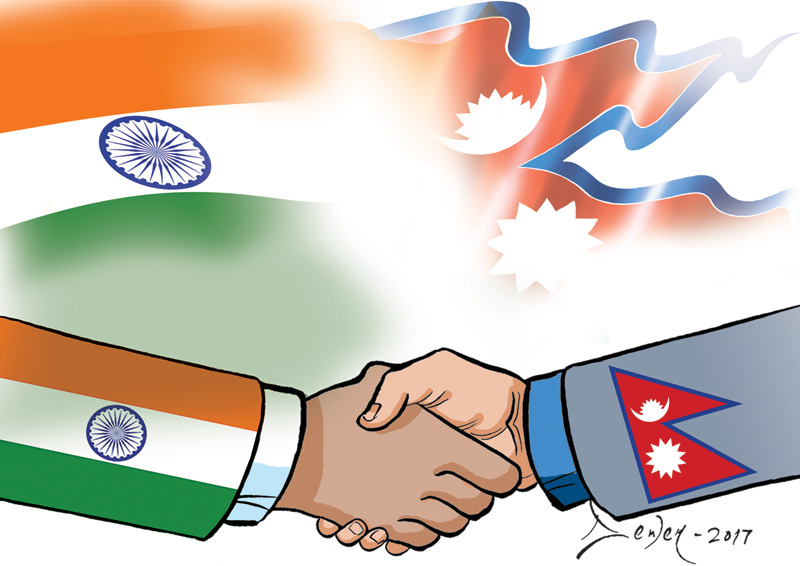 Delhi-wallas are right that misinformation, miscommunication and misunderstanding have aggravated Nepal-India tensions
In a briefing, on May 13, with a group of Nepali journalists visiting New Delhi, Indian Ambassador to Nepal, Manjeev Singh Puri, stressed on the need for Nepal to focus on development and prosperity. “Forget all bitterness. Focus on development which Nepal so badly needs,” he said.

We, 15 journalists in the team, listened to him eagerly.

We should not allow bitterness of the past to haunt present and halt prospect of future development all the time, the ambassador went on. What would India gain by cursing Britishers, for example? How long can we keep resentment against each other? Sometimes we need to forget some things to move forward.

You would not have heard Indian envoy in Kathmandu, which is considered to be an important posting in India and whose role often transcends to that of political manager, say this a year and half ago. Not least during the blockade. Thank you very much, Ambassador Puri.

In Delhi, officials at the Ministry of External Affairs echoed Puri.

First, they highlighted the importance of people-to-people relation between Nepal and India: Nepalis and Indians are like brothers and sisters. We share same culture, religion and food habits. We look alike. We are two separate nations only politically. What is in Nepal’s interest is also in India’s interest.

The officials interpreted exchange of high level visits between two countries as testimony of bilateral ties getting strengthened.

One official countered Indian meddling argument in Nepal with an allegory. If your car breaks down, and I come to help you repair it, he said, I am not interfering in your business. Actually I am helping you move forward. The car is yours, it is you who drive it.
A senior official attributed troubles (expectedly without mentioning ‘blockade’) between Nepal and India to “miscommunication,” “misinformation” and “misunderstanding.” This is the time to clear all such misunderstandings and move forward, he said.

Those who spoke on Nepal praised Nepali people, beautiful hills, mountain landscape and abundant natural resources. They highlighted Nepal’s tourism, hydro and agriculture potential. They expressed worry that Nepal has not been able tap this for its development and added that India is always ready to assist in Nepal’s development endeavors.

To doubt the intention of a neighboring country, so worried and so concerned about development of our country, would be dishonest, I thought.

Of course, when officials of foreign ministry of one country talk to journalists from another country with which their country has had troubling relations recently, they are not expected to scratch old wounds. Diplomacy is the art of saying ‘nice doggie’ until you can find a rock, goes a popular saying. But you would not expect such response from MEA officials, expressed through formal or informal channels, a year ago. I would not.

So can we say that Nepal-India relation, which underwent a lot of rollercoaster rides in 2015/16, is getting back to normal? Has India started to leave Nepal to decide on its political and constitutional matters by itself? Perhaps.

Course correction
The Delhi mandarins rightly identified that misinformation, miscommunication and misunderstanding have aggravated Nepal-India tensions. There was misinformation being passed to Delhi and rest of the world from a section of Nepali intelligentsia: Hill communities have subjected Madhesis to perpetual slavery. Pahades are running an anti-India movement in Nepal. A Madhesi cannot get citizenship, cannot vote or join public office under the new constitution. Hill men treat Madhesis like the colonial Britishers treated Indians and this ‘internal colonization’ has been entrenched by the new constitution. This is why India should intervene in Nepal.

May be they are saying this to India even today, for there are some who have made promotion and dissemination of this dark narrative their favorite pastime.

Nepali ambassador to India, Deep Kumar Upadhyay, and Maoist leader Narayan Kaji Shrestha have shared with Nepali press how some Indian leaders were pleasantly surprised when they briefed them about what is there in the constitution. Upadhyay told me in Delhi that Indians kept expressing their reservations on constitutional issues because we failed to avail them with English translation on time. “But they have no issue with our constitution now,” he said.

If India still relies on misleading information on Nepal, we will be back to the stage of miscommunication, misinformation and misunderstanding again.

Perhaps because India has other priorities at the moment, perhaps it got the prime minister in Maoist chairman Pushpa Kamal Dahal that did not ‘talk ill of India,’ or perhaps it realized how tricky and complicated constitution amendment is in Nepal, whatever the reason, India has refrained from commenting on our constitutional and political issues in recent times. When I asked some noted former Indian envoys to Nepal which constitutional provisions they find problematic, they declined to get into specifics. “Nepal needs to make its constitution as broadly acceptable as possible, that’s all.”

It is not yet known whether Rastriya Janata Party Nepal leaders, to whom India had provided overt support, have taken to anti-election posturing only to downplay their association with India, but various reports suggest that India is pressuring the Madhesi forces to take part in the local elections and thereby establish their political agendas.

India thus seems to stand in favor of election, and through it, the implementation of the constitution that it has so far only ‘noted.’

Those who love to project themselves as India’s friends in Nepal often say: It’s no use criticizing India, we are dependent on India for almost everything. We should not let our relation with India fester. As if we don’t know.

Those of us who spoke and wrote critically of India during constitution promulgation and blockade did so not because we thought Nepal can severe its ties with India or because we wanted to fight India. We did so because India had acted on “misinformation” and judged Nepal on that basis. It led to a disaster.

Heed people
Most Indians I talked to in Delhi were not aware about tensions between Nepal and India. Those who have heard about the country or come to Nepal talk about “nice Nepali people, Pashupatinath and earthquakes.”

But I also came across informed Indian citizens. In Delhi, I met Shariq Khan and Suroor Khan, residents of Uttar Pradesh. The first question they asked me after I introduced myself was: How is it there after earthquakes? How are the affected people? They sounded so concerned.

They were unhappy that their government spoiled relation with Nepal, “the only neighbor with which India has the best of the best relation and the country with which such relation can be maintained.” It was a mistake of our government to go that far with Nepal, they said. They were not politicians, nor journalists.

We don’t know what led India to take extreme measures in 2015. But India would do well to take note of these realities: constitution cannot be amended to the liking of Madhesi forces because there is no two third-majority for the type of amendment they are seeking.

Vast majority of Nepalis also do not support the realignment of boundaries as they are demanding. The Madhesis want constitution amendment before the election, which cannot happen, and without election the constitution cannot be implemented. Nepal faces two choices: Work on constitution implementation by correcting its flaws in the process by holding three sets of elections and leave the amendment to federal parliament, or get bogged down by fruitless exercise to amend the constitution and reach absolutely nowhere. This finally comes down to whether to implement or junk this constitution.

If Prime Minister Narendra Modi, who enthralled Nepali audience with his speech in 2014, had heeded what majority of people had to say during constitution promulgation, or had the government of India listened to people like Shariq Khan and Suroor Khan of Uttar Pradesh, the relation between the two countries would not have suffered a loss.

For now, I want to believe Nepal and India have come past misinformation, miscommunication and misunderstanding. And I want to be proven right.

KATHMANDU, Dec 4: Minister for Women, Children and Social Welfare, Bikram Bahadur Thapa, has called on the people to vote for... Read More...

Be it building of a nation or making a company successful, it is said that both men and women play... Read More...

Kathmandu, Jan 8: As is the case with each Nepathya concert, everyone always has their own pick of ‘the classics’ that... Read More...

Lalitpur DAO suspends all but essential services
2 hours ago
Residents can install EVs charging units for their personal use: NEA
35 minutes ago