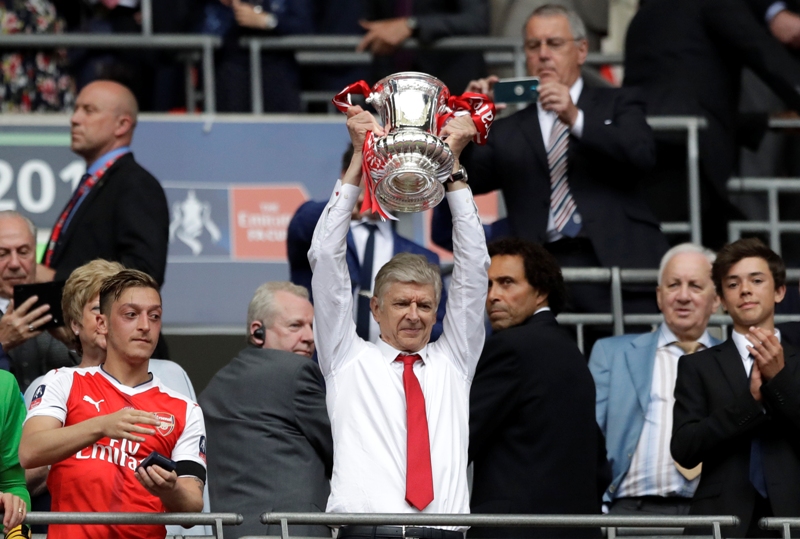 LONDON, May 28: Removing the record seventh FA Cup winner's medal from his pocket, Arsene Wenger was gratified and yet apprehensive.

"For once I have kept my medal," said the Arsenal manager, who usually gives them away to staff members. "So that means it's a special night for me."

And maybe his last night managing an Arsenal team.

Even after beating Chelsea 2-1 in the final on Saturday, Wenger indicated he has to stew until Tuesday's board meeting before discovering whether his 21-year reign will be extended by the record 13-time FA Cup winners.

Owner Stan Kroenke told The Associated Press earlier in the season he remained "very high on Arsene." Unsurprisingly, Wenger is anxious about publicly discussing whether he expects the north London club to offer a new contract.

"I don't think I can answer that question," Wenger said, "at the moment."

"I'm happy for the manager," Ramsey said on the Wembley Stadium pitch. "Hopefully he will be here next season."

The fan base certainly seems more divided, with Wenger bemoaning the "very hostile environment" created by some fans demanding his removal.

"It's down to the board members if I am the right man to lead this club further," the 67-year-old Frenchman said. "It's not about popularity, it's about competence."

Perhaps more competent leadership would have cleared up far sooner whether Wenger was staying. Delivering the FA Cup three times in four seasons has papered over some of the cracks as Arsenal has repeatedly come up short in the Premier League and Europe.

The Gunners were eliminated from the Champions League for the seventh consecutive season in the last 16. And they won't even be back among Europe's elite in September after finishing fifth in the Premier League; the lowest finish since Wenger took charge in 1996.

"I am convinced we were hurt by the uncertainty about my future with the players," Wenger said.

And yet Arsenal still ended the campaign with a cup victory that Wenger puts on a par with his last Premier League success in the unbeaten 2003-04 season.

Just as the season reached its climax, Arsenal turned in the type of tenacious display lacking so often, and against a side so commanding in the Premier League in Antonio Conte's first season in charge.

For once, this was a day when so much went right for Wenger, even with a patched-up injury-depleted defense featuring captain Per Mertesacker making his first start in more than a year.

"We had outstanding performances," Wenger said. "We know this team has suffered."

But the season has ended with a run of six victories in May after Wenger adopted the three-man defense that has served Conte so well, until now.

"They showed strength and unity," Wenger said, "and we played spectacular football again."

There was better luck, too.

When Alexis Sanchez put the ball in the net after four minutes, it appeared to be initially disallowed because Ramsey was adjudged to be interfering with play while offside. But the decision by Anthony Taylor's assistant was overturned by the referee.

"Ramsey's interfering," Chelsea goalkeeper Thibaut Courtois said. "If he doesn't run to the ball, I can go out and claim the ball but now because he runs I stop and then Sanchez takes advantage."

And scored his 30th goal of the season.

Arsenal even had the luxury of a man advantage from the 68th when Victor Moses received a second yellow card for diving. Somehow, though, Diego Costa managed to equalize in the 76th, bringing down Willian's lofted ball on his chest and striking past David Ospina.

Rather than imploding, Arsenal was back in front within three minutes.

On an afternoon when so much bucked the story of the season, double player of the year N'Golo Kante failed to track Ramsey, who was left unmarked to meet Olivier Giroud's dinked pass back.

"It's been an up and down season," Ramsey said, "but to finish it with an FA Cup has to be a successful season."

But it is the losers who still head in the offseason the most buoyant. Revitalized after the 10th-place league finish in 2016, Chelsea lifted the biggest prize in English football last week after winning 30 of the 38 games.

"Maybe now we're a bit sad, but we shouldn't forget the amazing season we've had being (Premier League) champions," Courtois said. "A lot of teams are waiting to be champions for very long, including Arsenal."

Instead, the FA Cup is the consolation prize again for Arsenal and Wenger.

Jan 7: Not even an FA Cup match against fourth-tier opposition could provide any respite for Mark Hughes. ... Read More...