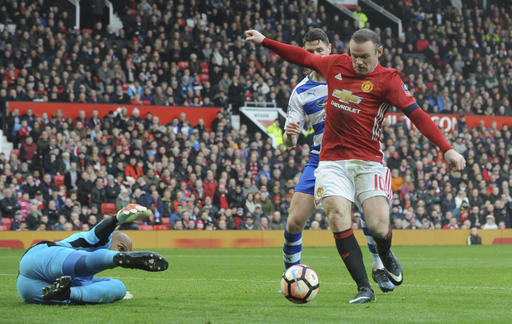 With the 79-year-old Charlton watching from the stands, Rooney guided in Juan Mata's cross after seven minutes as the defending FA Cup champion swept aside second tier Reading 4-0 in the third round of the tournament.

Rooney's latest milestone — he is the record scorer for England's national team — came in front of Old Trafford fans who have adored him, on and off, ever since he joined as a teenage prodigy from Everton in 2004.

"To do it at such a massive club like Manchester United, it is really proud moment for me," said Rooney.

"It was not something I could have imagined. You don't think that far ahead, but I have been at this club a long time, it is a huge part of my life and it is an honor to be up there alongside Sir Bobby."

Rooney almost grabbed his 250th goal when he was denied from close range in the second half of a one-sided contest, but he will surely not have to wait long.

"You want to do records in front of your home fans and we have got two home games coming up and hopefully I can get the next one in one of those," Rooney said.

United is in a hot vein of form for manager Jose Mourinho after winning its eighth straight match in all competitions and it dominated Reading, managed by former United defender Jaap Stam, from the start.

Rooney, who spurned a great chance inside two minutes, did not have long to wait to reach his milestone and then turned provider as United doubled its lead on 15 minutes, playing in Anthony Martial who slotted a right-footed shot into the corner.

Marcus Rashford made it 3-0 with 15 minutes to go, his first goal in 18 matches, and quickly added a fourth after a mistake from Reading goalkeeper Ali Al Habsi.