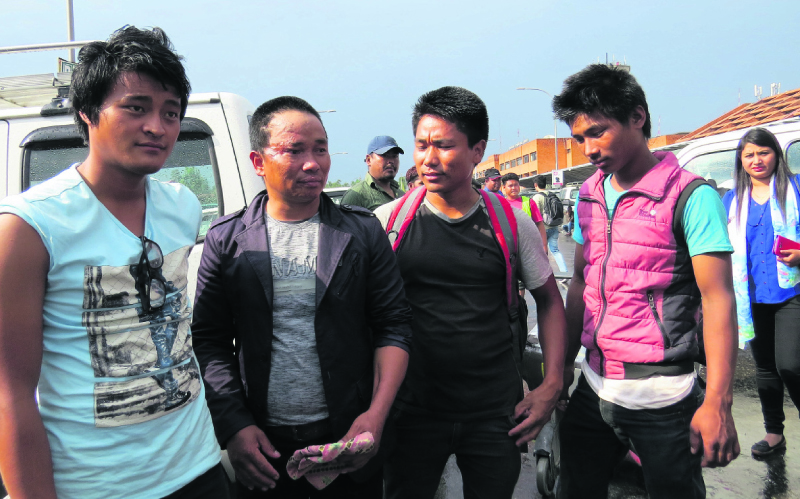 KATHMANDU, May 26: How would a family feel when a loved one they had cremated two years ago returns alive from the Gulf ?  Moreover, they had already received compensation from the state for accidental death. This may sound like something from  a movie, but it actually happened in Morang district.

Subas Tamang, 37,  of Laxmimarga, Morang, was thought to have died  in a truck accident in Saudi Arabia two years ago. But he has just returned to Nepal alive, much to the astonishment and joy of his family.  When his three brothers welcomed him upon landing at Tribhuvan International Airport Friday afternoon, he ‘seemed like a different person’.

It now turns out that the body  identified as Subas, repatriated and already cremated by the Tamang family was actually that of Tejendra Bhandari of Kapilvastu district, who was killed in the same accident. The workplace accident that occurred on July 9, 2015  killed three on the spot. Subas and Tejendra were critically injured.

The next day, the hospital where they were receiving treatment informed their employer  company that Subas had breathed his last. The injuries were so bad that the faces of the victims were unrecognizable. The hospital and police  reported that Subas was among the dead on the basis of inquiries with fellow workers.

Police  and medical reports were prepared accordingly and forwarded to the  Nepali embassy in Saudi Arabia.

Back in Nepal, the Tamang family was devastated by the tragic news. Subas’s wife Santoshi  fainted repeatedly.

“Everyone said my husband could not have died in the accident. However, after we received the body along with the documents, we were compelled to accept the reality,” Santoshi told Republica.

According to her, the body was received  a month after the accident.
It came to light that Subas was still alive only after the sole survivor of the accident started seeing improvements in his damaged facial structures. His identity was duly  verified by colleagues.

Subas also  suffered brain injury  and is  recovering gradually. According to his brother Aamber, Subas recognized him upon disembarking at TIA. But Subas could not recognize his other two brothers.

CHITWAN, March 5: A person is reported missing in the Kalimati lake of Nava – Jagriti Community Forest located at... Read More...