2 missing, hydropower projects damaged in Sidhuopalchwok due to incessant rain 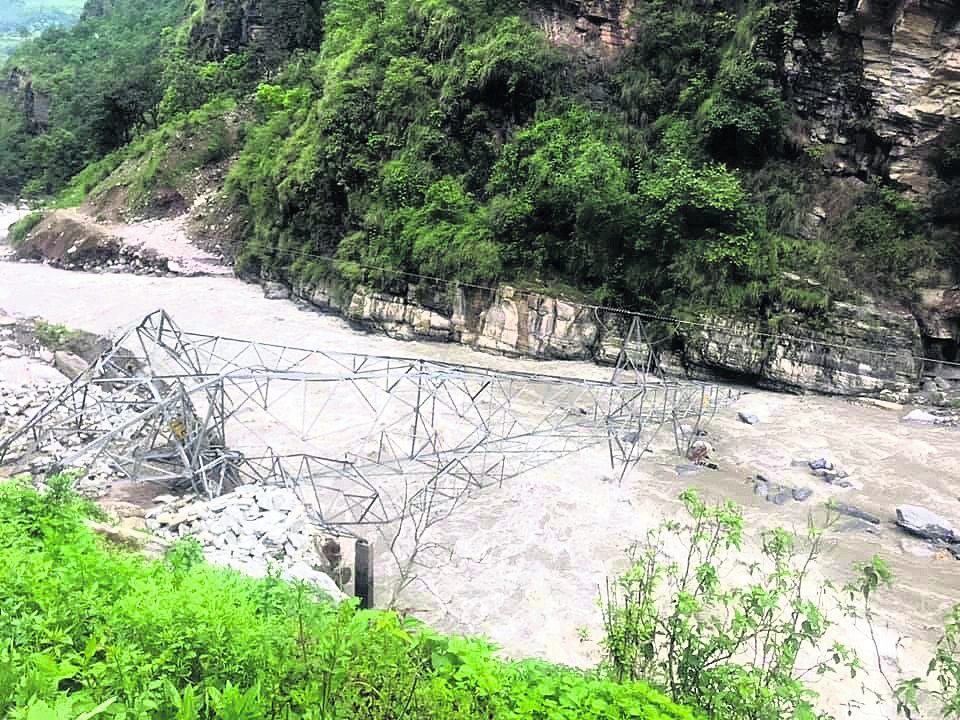 A transmission tower falls into the river due to flooding in Sindhupalchowk district.

SINDHUPALCHWOK, July 8: Two construction workers went missing while two others sustained injuries due to floods triggered by incessant rainfall in Sindhupalchok district on Saturday night. The injured workers -- Kami Tamang and Pembathokel Sherpa, who were rescued using the long line technique -- were airlifted to Kathmandu for further treatment.

Those who have gone missing are identified as Yadab Kafle, the site in-charge of hydropower project and electrician Ram Autar Chaudhary. Both the missing persons were working with Chaku Hydropower Project in the district. They were working there as employees at 122 MW Shivashree Hydropower Pvt Ltd.  The two injured are currently receiving treatment at the Lalitpur-based B&B Hospital.

Locals have moved to higher lands after water level increased significantly in the district bordering with China and swollen Chaku Khola swept away houses constructed along its banks.

Concerned over the safety of locals, police had alerted the locals to move towards higher lands as continuous rainfall destroyed infrastructures in the area. According to police, six houses in Chaku

Bazaar have been destroyed by the incessant rainfall.
The flood has damaged six hydropower projects built in Chaku Khola and the Bhotekoshi River.

“Flood has caused massive destruction. We are still collecting the details of the damage,” said Inspector Thapa.

“Four hydropower projects are filled with mud. It has cause huge damage in switch yard and machines,” said Umesh Kasaju, owner of Shivashree Hydropower Project.

The flood has damaged the dam of the 200 MW Madhya Bhotekoshi Hydropower Project. Upper Chaku Hydropower Project, which was supposed to generate electricity from next month, has also been damaged by the flood.

Earlier on Friday, Mukti Siwakoti, an engineer from Dolakha went missing following the flood in the district.

Meanwhile, Rasuwagadhi has been disconnected after the rainfall damaged the Mailung-Syafrubesi road section that connects Kathmandu with Rasuwa, the district bordering with China.
Police Inspector Ishwari Prasad Bhandari said the road clearance efforts were underway but it was not sure when the transportation will resume.

PARBAT, Aug 7: In an apparent suicide, a girl has gone missing after she jumped in a river at around... Read More...