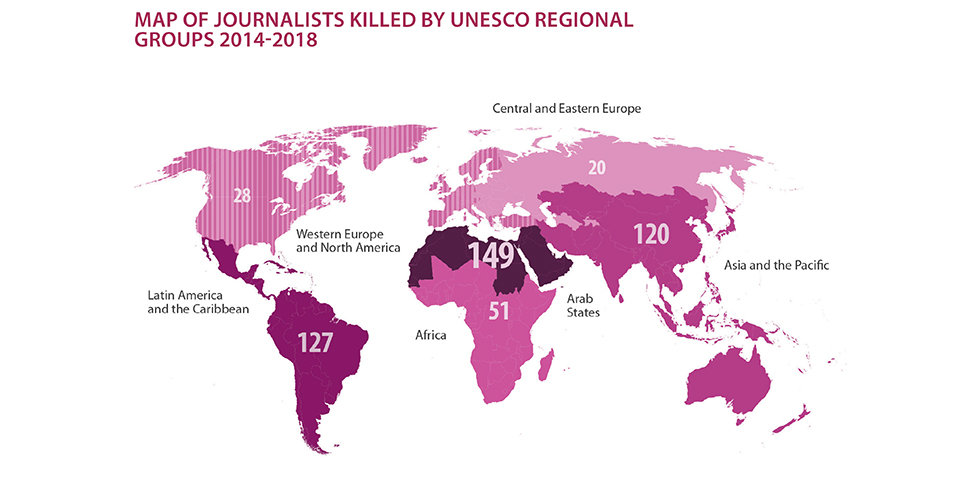 KATHMANDU, Nov 2: Nearly 500 journalists were killed throughout the world between 2014 and 2018 which accounted for an 18% increase in the number of killings, as compared to the preceding five-year period (2009-2013).

According to a report published by the United Nations Educational, Scientific and Cultural Organization (UNESCO) titled 'Intensified Attacks, New Defences', 2 journalists were killed every week on average in the period.

Of the total killed, 149 were killed in the Arab States, the deadliest region for media followed by 127 in Latin America and the Caribbean region and 120 in Asia and the Pacific region. Similarly, 51 journalists were killed in Africa while 28 and 20 journos were murdered in Western Europe and North America, and Central and Eastern Europe respectively.

Although the majority of journalists killed were men (449), killings of women journalists almost doubled compared to the previous five-year period. 24 female journalists were killed in 2009-2013, compared to 46 in 2014-2018.

When it comes to media types, in the year 2018, TV journalists formed the largest group among journalists killed (33%), followed by reporters working mainly for print media outlets (26%). Of them, 19% and 15 % belonged to radio and online sectors respectively. The least 7% of journalists who worked for cross platforms were killed in the same year according to the report. 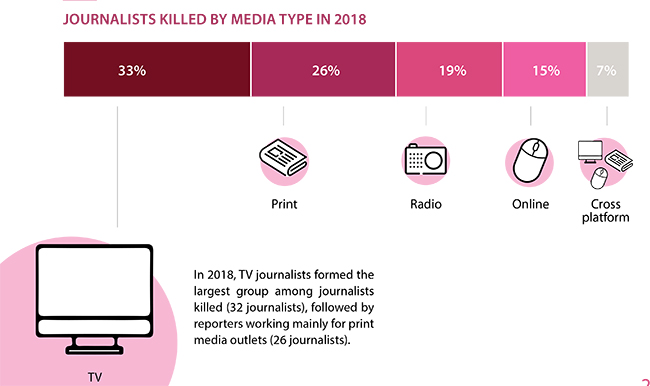 Over the past five years, the three most dangerous countries were Syria, Mexico and Afghanistan with 54, 53 and 46 journalists killing.

The period witnessed an inversion in the proportion of journalists being killed outside of conflict zones. While in 2014 and 2015, a majority of journalist killings occurred in conflict regions, in 2017 and 2018 more killings occurred outside conflict regions. This trend reflects the changing nature of violence against journalists, who are increasingly silenced for reporting on issues of corruption, crime and politics.

According to the report, out of the 61 states requested in 2019 to provide an update, only 37 responded. The highest response was recorded in 2017 (74%) while only 27% of states responded in 2014. The UNESCO director-general sends an annual request to the member states to provide updates on the status of judicial follow-up of killings of journalists recorded by the Organization. Of the 1109 killings that the DG condemned between 2006 and 2018, the organization has received information on 733 cases.

The report reveals that impunity level is very high as 88% of cases of killings of journalists remain unresolved worldwide with perpetrators of violent acts against journalists walking freely. The highest percentage of resolved cases has been reported in Central and Eastern Europe (48% of cases resolved), followed by Western Europe and North America (45% of cases resolved). The region with the lowest percentage of resolved cases is the Arab States region, where only 1% of cases have been reported resolved by the concerned Member States.

The trend shows that journalists have been exposed to other forms of threats and violence apart from fatal attacks such as violence and intimidation. Journalists have reported facing violence at the hands of armed insurgent groups, organized crime, and state authorities. Several studies indicate a rise in the number of journalists incarcerated, held hostage, or who have disappeared. Numerous journalists’ testimonies also document the continued use of torture.

Similarly, digital threats are being escalated from both state and non-state actors. Censoring and silencing journalists have been growing. Cyber-mediated attacks are used to hamper journalistic work. The recent trends also reveal that female journalists are targeted more frequently and more viciously by online abuse and harassment than their male colleagues.

KATHMANDU, June 22: A section of civil society staged a demonstration in Kathmandu on Saturday. ... Read More...