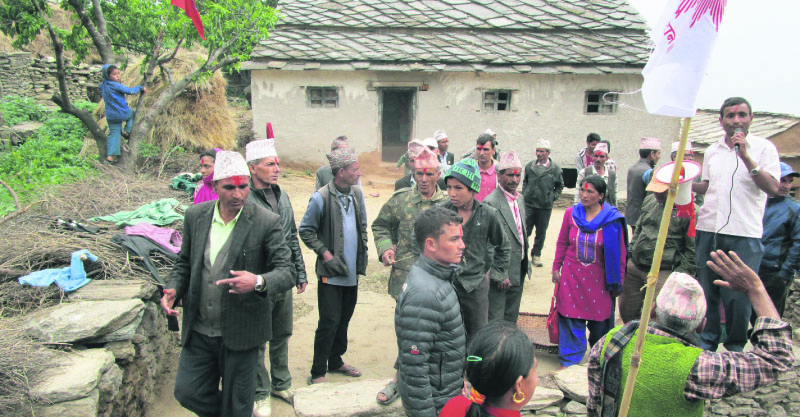 Since the last few weeks, major political parties, CNP - UML, CPN (Maoists - United) and the Nepali Congress, among others, are extremely busy in selecting their candidates for various posts. Dozens of aspirants have been demanding election ticket for the posts of the ward chief, chief of village council and mayor of municipalities. With the election nearing, internal disputes over the nominations have been escalating, Dipendra Bahadur Thapa, president of Nepali Congress (NC) Baglung district committee said.

“The election is slated for May 14. Both big and small parties have their own problems. While major political parties like ours are struggling to choose candidates from so many aspirants, small parties are struggling to find candidates to field in the election on their tickets,” Thapa said. “Our local level committees have not finalized candidates so far even though we are supposed to submit them by Thursday,” he informed to Republica adding that the recent days have been very stressful.

He said that the party’s nominees for various posts at the ward, village council and municipality levels have been delayed because of the increase in the numbers members and posts at these levels in this local election. “Unlike in the past, this time we have to nominate candidates for many posts at the ward, village council and municipality level. While many want to clinch party ticket for the lead posts, few are willing to run for lower rank posts. And it has been challenging to find capable candidate for all the posts,” said Thapa.

Lal Bahadur Thapa, secretary of CPN-UML’s district committee shared similar woes for the party leadership.  “For lead positions at the ward, village and municipal level we have dozen of applicants vying for the posts. We are trying to nominate candidates for the posts unanimously and this it is taking time,” said Lal Bahadur. “If party ticket is given to a candidate unanimously it ensures that we don’t have internal frictions and paves way for us to focus on winning the elections,” he added. He further informed Republica that the district committee expects the village and municipal committees to forward the names soon.

Due to the time taken in finalizing candidates, political parties feel that they might have less time than needed to communicate their manifestos to the voter and sway their opinion in their favor. “Local elections this time are complex than earlier. We have to educate voter to ensure that they vote correctly to the candidate of their choice. Apart from that we also need to inform them about our manifesto and convince them that we their best choice,” Thapa said adding that a fair election outcome cannot be ascertained without educating the voters. CPN (Maoists - United) leader Krishna KC also shared that struggle has been going on within his party also to finalize candidates for lead roles.

In midst of the struggles that major parties are facing with fierce internal competition for lead posts, small parties are struggling to cope with shortage of candidates, even for lead posts. A source, who did not wish to be named, said that parties like the Rashtriya Prajatantra Party and CPN - ML have been not finding candidates to run for all the posts at all levels as mostly influential individuals are vying to clinch election ticket from bigger political parties.

“While some parties are not able to field candidates for all posts, the major ones are now under intense pressure to finalize one from the many aspirants. Our party has been working hard to finalize the name of our candidates and look forward to finalize before the deadline,” said KC.

Since the election is taking place after nearly two decades, the public is greatly interested, party leaders said. “During these years the general public has understood in depth the problems they face when they don’t have elected representatives in the local bodies. They are regarding the elections as a means to fix the longstanding leadership vacuum in the local bodies,” KC said.

GORKHA, March 28: As local-level elections inch closer, political parties have boosted their presence in villages in Gorkha. All the... Read More...