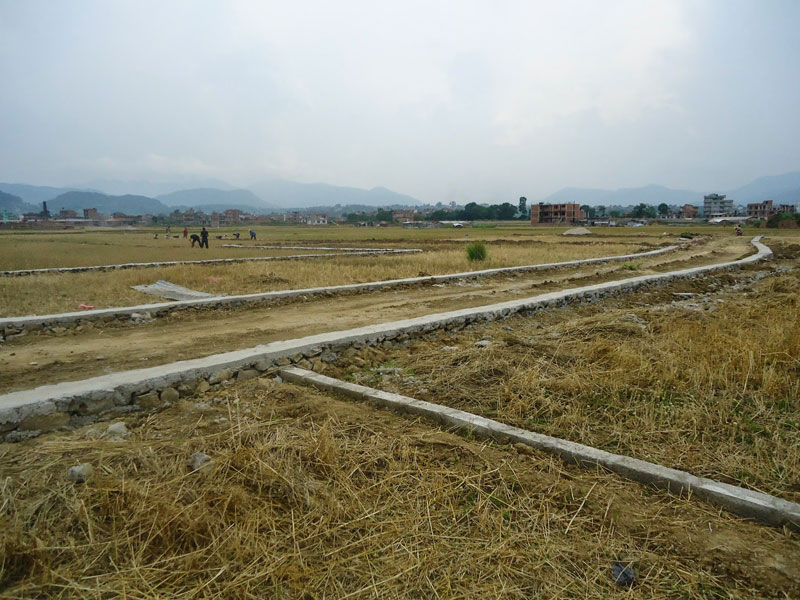 Land price moved up in late 1980s when banks began accepting over-valued land as collateral
It is hard to understand the sky-high price of land in Nepal. Nepal’s real estate business has been in an upward swing since 1980s. The ever-increasing price of land has spilled into economy in such a way that owning of a small piece of land within the ring road of Kathmandu is out of imagination of even individuals with strong financial status. It is impossible for first-time buyers trying to get on the property ladder through their savings.

Normally, land price depends on economic significance of a particular location and on other amenities. These amenities, inter alia, are the state of national economy, road connection, market proximity, topography and local externalities that give a fair value to the land. Together, they create a healthy real estate market and room for potential investment. In Nepal, ballooning land prices in absence of such factors has, in essence, crippled our economy, affecting the poor in particular.

As land prices increased at an exponential rate, people started to take it as a ‘safety net’ and to invest in it more and more. Land became an investment haven as the market predominantly signaled positive wealth effect. Moreover, people had few other lucrative sectors for investment.
At the same time banks also didn’t encourage other sectors fearing liquidity and pay back risks.

Likewise, those who invested in industries could not make expected gains due to political instability.

The central bank, which could have directed commercial banks to divert their investments into productive sectors, failed to fulfill its obligation. The economy suffered because of lack of investment in manufacturing and productive sectors. So the situation today favors those who possessed land before 1980s and who have been able to retain them. It has created a deep gulf between the haves and have-nots.

It’s a relief that central bank has now tightened rules on extending loans on real estate.

According to the financial survey of 2073, household income has increased by 56 percent in six years but land prices have increased 330 percent over the past 30 years. This is bad news not only for the poor but also for the upper middle class people who want to purchase land through their income.

The increasing land price has had trickledown effect on people’s lives, most egregiously expressed in rampant inflation in consumer goods. According to the Asian Development Outlook, Nepal is projected to have the highest inflation rate in South Asia. It predicts that Nepal’s economy will have a persistently large double-digit inflation, widening the income and price gap. Since our inflation rate has been the highest in South Asia in the past few years, our money is fast losing its value. Ask any Nepali today about the worth of their money and the answer will be frustrating. People don’t feel safe going to the vegetable market with less than a thousand rupee bill.

A developed economy balances its augmented land prices with proportionate income distribution and industrial growth. With this, members of the society can actively participate in real estate market, and high land prices are constantly backed by strong economic fundamentals. According to the Swiss National Bank, US $12,400 in Switzerland is enough to buy just a square foot of land, but per capita income of $80,000 and a GDP of $647 billion allow most of its people to engage in land transactions despite soaring prices. In comparison, Nepal’s per capita income is just US $741 and its GDP $23.8 billion.

According to the Central Bureau of Statistics, the Nepali economy last year experienced a 14-year-low economic growth of 0.77 percent and narrowly escaped negative GDP growth. In addition, Nepal has one of the lowest Gross Fixed Capital Formation among the LDCs. And yet land prices continue to rocket sans any basis.

In such a land-dominated economy, land price is likely to increase in the foreseeable future.  Nepal has untapped potential in hydropower, manufacturing and Information Technology (IT), to name a few. It is high time the banks and financial institutions diverted their loans to these productive areas.

A sensible option would be a robust revenue mobilization, away from land and into manufacturing. A successful shift in this direction will attract more investment, and aid in economic and financial sustainability.

If the productive sectors fail, we are likely to see bursting of the real estate bubble. A long-term financial crisis is inevitable.

The author is an alumni of Henan University of Technology (HAUT), China