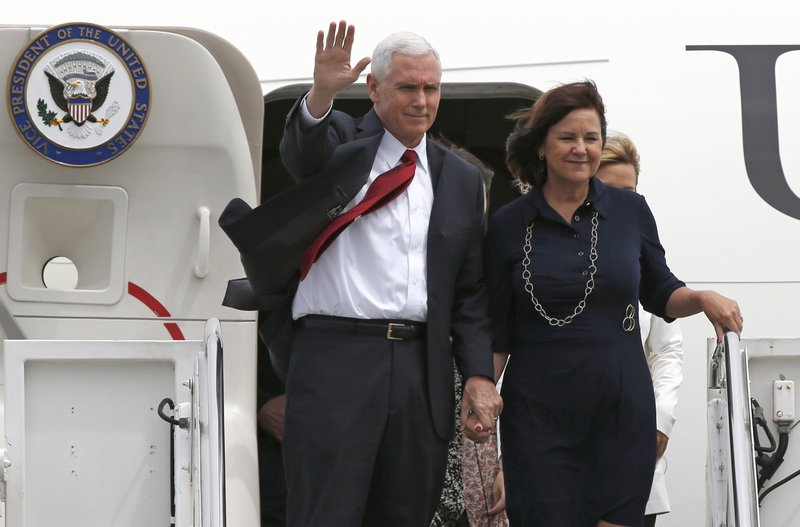 Concluding a visit to South Korea, Pence told business leaders in Seoul the administration is taking a fresh look at trade agreements as part of its "America First" policy.

"We're reviewing all of our trade agreements across the world to ensure that they benefit our economy as much as they benefit our trading partners," Pence told the American Chamber of Commerce in Korea.

White House officials said the economic meetings in Tokyo, with Deputy Prime Minister Taro Aso and other officials, are meant to forge a framework for future discussions after the U.S. withdrew from a Pacific Rim trade pact.

They will serve as the kickoff to the U.S.-Japan economic dialogue that was announced by President Donald Trump and Prime Minister Shinzo Abe in February.

While inspecting the Demilitarized Zone between North and South Korea, Pence warned Pyongyang that after years of testing the U.S. and South Korea with its nuclear ambitions, "the era of strategic patience is over."

Suga, the Japanese government spokesman, said Japan hopes to discuss policies on North Korea with Pence and to convey a growing sense of urgency over its missile tests and other actions.

To ally or not to ally

Congress needs Madhesbadi parties for its very survival while these parties can do without such an alliance with NC. ... Read More...

India to resume export of Covishield vaccines from next month, neighboring countries to get first priority
11 hours ago