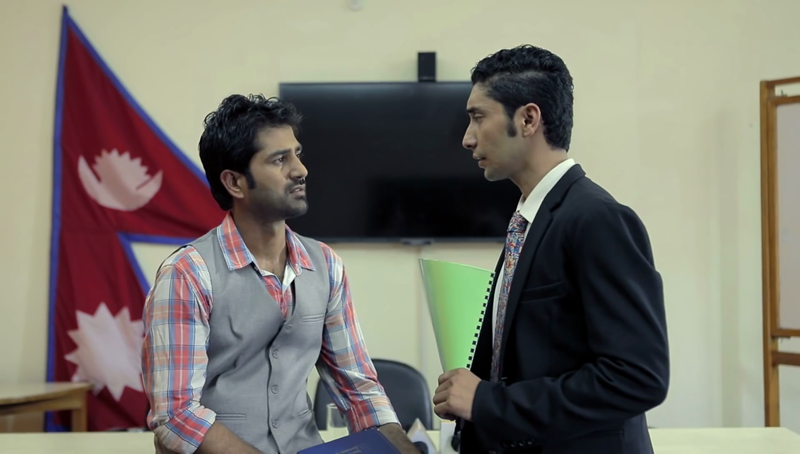 Most media and advocacy campaigns on LGBT rights highlight their problems, not the success of LGBT characters.

She’s strong, determined, and believes in judging people by their work and virtue. But the discussion isn’t about the prime minister. It is about her press advisor. A quick review of media portrayal of Lesbian, Gay, Bisexual and Transgender (LGBT) characters provides evidence that most LGBT roles are surrogates from stereotypes of filmmakers, who make a mockery of LGBT community. But the introduction of a strong, independent, and successful gay character in the TV series defies these stereotypes. Bishwash, the character, promotes a positive image of LGBT community. He isn’t portrayed as the victim but as a role model, somebody people can look up to and admire.

Tsering Rhitar Sherpa, the director of the TV series, recalls the discussion that he, along with Search for Common Ground, had while developing the character. “A gay character and that too as a role model? The very concept was new and liberating,” says Sherpa. The production team conducted an extensive research to shun stereotypes, and interviewed LGBT people to identify virtues that would craft the character as a role model.

Reviewing the past portrayal of LGBT characters in Nepali films, the production team decided to build a strong, highly influential and opinionated character with a knack of activism. Considering the influence of media in shaping people’s behavior, the character treatment was conducted through a ‘do-no-harm’ lens. “The character is gay, but he doesn’t demand people’s sympathy. By introducing a strong gay character, we wanted people to empathize with the LGBT community, and understand that they are no different from normal people,” shares Yubakar Raj Rajkarnikar, the producer of the series.

Most media and advocacy campaigns on LGBT rights highlight their problems, but fail to depict success of LGBT characters. They are mostly supported or influenced by other social counterparts. The ‘hero treatment’ of heterosexual characters often overshadows competence of LGBT characters, who are portrayed as weak and powerless. “LGBT movement is not about their struggles. It’s about the possibility of change, and establishing an inclusive and enabling society. We need to portray LGBT characters as ‘heroes’,” argues Rajkarnikar. One can only achieve this if we restrain ourselves from depicting the LGBT community as victims, and give them influential roles to establish themselves as change makers.

In the context that Nepal has made great strides in securing LGBT rights, one can fearlessly say that people in Nepal are ready to accept the truth, and the issue requires no censorship. The prevalent comic and irrational portrayal of LGBT people have shaped common perception of the LGBT community, and there’s a risk of this negative portrayal fueling homophobia, and a culture of uncivil behavior towards the LGBT community. This can change, if our media advocacy campaigns are complimented by evidence-based story telling based on facts and real-life situation.
To address the bias against the LGBT community, there’s a need for development communicators to collaborate with the media to develop content that sensitizes people, and paves the way for wide acceptance of homosexuality. This can be done if our message and portrayal of LGBT issues is evidence-based and positive.
Communicators and media practitioners are often worried about ‘reality’ and its repercussions. “How real is too real?” question contributes to self-censorship of reality that represents the LGBT community, and results in a sanitized portrayal of the issue which fails to make a great impact.

The production team of Singha Durbar also faced a similar dilemma: whether or not to showcase an intimate scene between the gay couple, Bishwash and his partner Dinesh. “We were not sure how the audience would react to two men cuddling, and caressing each other. But then, we wanted to give out a strong message. LGBT people are like us, they desire the same kind of affection and love. We wanted to keep it real,” shares the director.

The TV series not only brought attention to the issue that was once a taboo, but it also highlighted its political undertone paving the way for discussion on equality, inclusion and freedom of choice.

There’s a need to celebrate LGBT achievement through powerful story-telling that is bias-free. With the growing demand for representation of positive LGBT character in the media, character representation has indeed increased. But more representation alone cannot change people’s perception.

The LGBT characters should have pivotal roles and positive narration so that the larger mass is familiarized with their challenges. Positive imagery shifts people’s bias to developing an appreciative and open mind. Development communicators and media practitioners should thus utilize the media to promote positive image of LGBT community. This is the key to changing behavior, and making people tolerant and respectful.
Most importantly, we need a fearless and unbiased media that believes in busting stereotypes and promoting LGBT people as role models, not victims.

The writer is a development
communicator

Faking complete knowledge is not wisdom. Therefore, it is a wise thing to say “I don’t know”. Only the people... Read More...

Dr KC, who was branded as mad by a constitutional body in Kathmandu, reached out to the flood victims in... Read More...