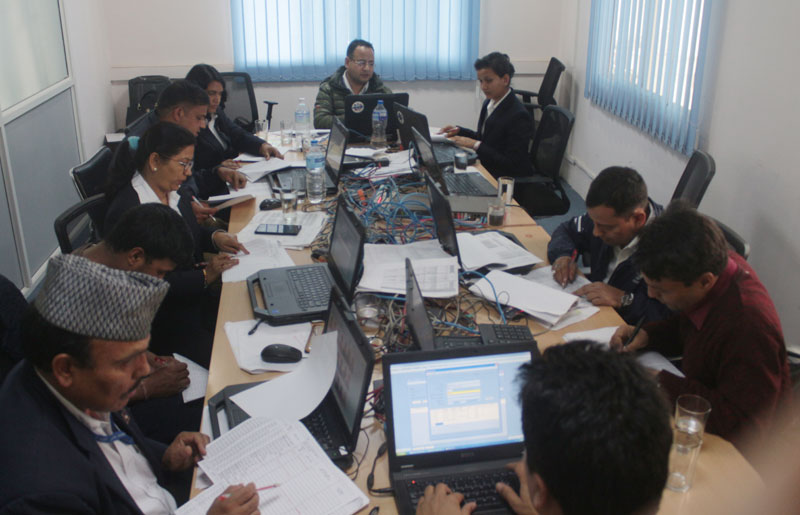 KATHMANDU, March 31: It's already 7:00 pm. Jamuna Khanal is busy cross-checking and uploading the name-list of voters. She might have to stay even longer, as the data processing target for the day has not yet been met. Khanal had come to the office early in the morning.

There are 15 others in the room, who are equally, if not more, busy with their computers. Wires and scattered papers on the table depict a messy look. They look at the paper drafts on and off and carefully scan the details before finalizing and listing the voters' names.

"Duplication must be avoided. One voter cannot be registered at two places," she said, without looking at media persons. "Same voter might be recorded in several districts. In that case, the latest registration date is considered valid and registrations elsewhere are cancelled," she explained.

Prakash Adhikari, who was giving an ear to her, smiled, saying there's no time 'even to breathe', let alone talking to the media. "It's a rush. No fixed working hours. And things are going to get tougher in the coming days.”

This was the scene at the IT Centre of the Election Commission (EC) on Wednesday.

The core election data is processed from this centre, where 22 staffers are working day in and day out to make the upcoming local-level elections a success.

It's no different in another hall on the right hand side of the IT centre, where piles of ballot boxes, table clocks, polling screens, ink boxes, staplers, pins, polling curtains, and nameplates, among others, have been stored. The EC has to arrange 67 types of materials to conduct the elections.

In one corner of the hall, where voters' identity cards are being readied to be printed, a dozen of technicians are navigating between materials such as paper cutting machines and wires.

This is for the first time such huge-scale preparations are being made at the EC, said Chief Election Commissioner Ayodhee Prasad Yadav. "This is historic. It's challenging, but very important and pleasing too," he adds.

A total of 14 million voters are to cast their votes this time -- nearly two million more than the figure for 2013 constituent assembly elections. Local-level elections are taking place in the country after nearly two decades, and according to reports, the entire country is in the festive mood.

“Just over a month left for the election day, and we still have a whole list of things to do. EC is working on a war footing to make the elections a success. We are not just going to hold elections, but free and fair elections," Yadav announced firmly.

Consultations, meetings, fillings, and whatnot, the rush is apparent at the EC. "Just a few days left. We do not what to regret later. Of course, there's rush and it's tough, but everything is going on smoothly," said Laxmi Prasad Yadav, Joint Secretary at the EC.

The government had announced the elections in February, asking the EC to conduct it within 82 days.  Conducting such a 'complex' election within the shortest ever deadline in the country's election history was a huge challenge, but EC accepted the challenge.

A total of 105,000 civil servants and more than 200,000 security personnel, including the army, are set to be mobilized at 21,000 polling stations across the country for the polls slated for May 14.