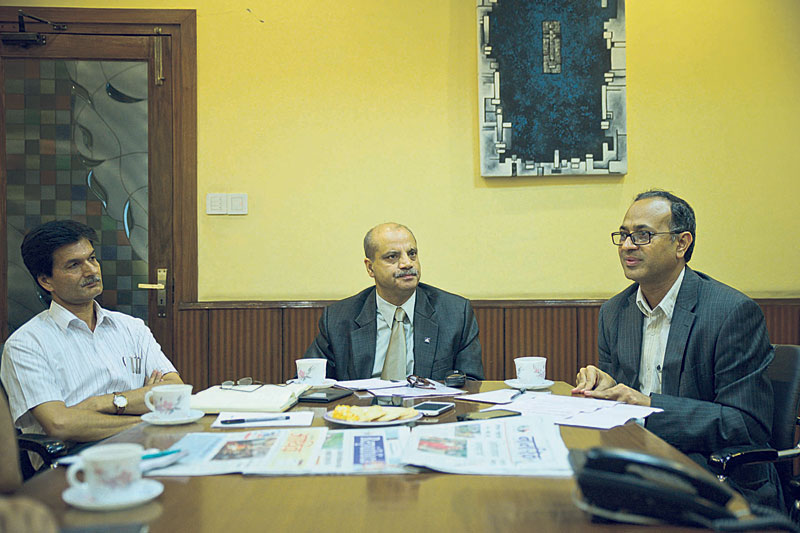 KATHMANDU, July 6: Nepal Rastra Bank (NRB) should work for maintaining price stability, whereas the government should shoulder the responsibility of propelling growth, according to experts.

As rising inflation means decline in value of money, the central bank has to crack the whip on inflation to maintain the value of money and keep it stronger, according to Head of the Central Department of Economics under Tribhuvan University, Ram Prasad Gyawali.
In the budget for Fiscal Year 2016/17, the government has targeted to contain inflation under 7.5 percent, whereas the economic growth has been targeted at 6.5 percent.

Likewise, inflation is hovering above 10 percent almost round the year even though the government had set a target of containing inflation below 8.5 percent in Fiscal Year 2015/16. Generally, banks are offering 1-3 percent interest on savings account. Inflation above 10 percent means a depositor will lose Rs 7, even after adding interest income, in his deposit of Rs 100 in a year.

Due to rising inflation, depositors have been reluctant to keep their money in banks and are turning to share market which has been offering better returns compared to banks.
If the Monetary Policy marginally increases bank rates, the excess liquidity, which is fueling the inflation, can be controlled and the interest rates will go up, which would eventually attract more deposit in the banks, and also curtail capital flight. “People will be encouraged to deposit as they get comparatively more return,” added Gyawali.

The lending rates have been below the inflation, which is ridiculous, according to Sanima Bank’s CEO Bhuwan Dahal. “Neither the lender nor the borrower is benefitting,” he added.

We have been saying that the budget for the coming fiscal year is very ambitious and hence cannot be implemented. But I think the budget should always be ambitious so that extra efforts will be put to meet the target.

Since the budget is focused on infrastructure projects, the monetary policy for the upcoming fiscal year should also support the government’s focus. One of the stumbling blocks for the infrastructure development is a mentality that the government should pay interest for the borrowing. That is why there has been very few domestic borrowing in recent years. There should be more investment in the infrastructure projects. More domestic debt should be raised if needed. The monetary policy should take an initiative for address financing deficit for infrastructure projects. This is also the need of the banking industry as interest rates here are quite volatile. There are not much instruments for banks to invest liquid funds. Also the door should be opened for the private sector to launch their bonds. International Finance Corporation has also taken the initiative to issue bonds in local currency. But it has not moved ahead as planned in the absence of legal framework.

There are also worries that the budget, which is of distributive nature, will put pressure on inflation as such expenses do not help to maximize domestic products. Government expenditures should help to generate output or employment. Otherwise, it will only make products and services expensive.

Arranging funds for industries for import substitution at a time when there is huge trade gap is another key area that the monetary policy should address.
It is high time that the central bank reviewed its mandatory deprive sector lending policy for banks. It should review whether the policy has really brought the desired results.

Inflation linked to supply system rather than money supply

Given that the central bank has the objectives of maintaining financial stability, price stability and economic growth, NRB should also have to work toward meeting the objectives of the fiscal policy. What the central bank can do is reduce the cost of the financial intermediary so that there would be good flow of the finance toward private sector and help increase economic activities. It should also emphasize on making banking system robust. The government plans to borrow Rs 111 billion in the upcoming fiscal year. There is 6 percent cash reserve ratio requirement for commercial banks. The government’s capacity to borrow will increase if the current CRR requirement is marginally reduced. The banks currently have total deposit of around Rs 1,500 to Rs 1,600 billion. If we have to support the government’s borrowing plan, CRR has to be reduced. However, loan-able fund for the private sector is not going to increase just by reducing CRR or Statutory Liquidity Ratio requirement because Credit Deposit (CD) ratio is there to govern that all.

There is a concept here that more loan-able fund for the private sector can be arranged by reducing SLR and CRR requirements. Fact is, the reduction in CRR and SLR is not going to help the availability of loan-able funds unless the CD ratio requirement is changed. We should have CRR at 6 percent, SLR at 12 percent and CD ratio at 80 percent, as per NRB requirements. This means we should have around 25 percent of liquid assets. If loan to private sector is to be increased, the central bank should touch the CD ratio. To achieve the growth target, loan flow to private sector must be increased. Increasing CD Ratio by 2 percentage points to 82 percent means will make Rs 30 billion available to the private sector.

We need to do many things in Nepal for infrastructure development. The positive part is that we have foreign exchange reserve of around US$ 10 billion. The central bank should also study the possibility of external commercial borrowing like in India and putting in place a mechanism to hedge the risks of foreign exchange rate volatility in such borrowing. All these things, be it reducing CRR requirement or raising CD ratio, are going to put upward pressure on inflation. The government has never managed to contain inflation within its target. This means that inflation in Nepal is linked more on supply side factor rather than on money supply or from the demand side. As the base of inflation is already high, the target to contain inflation at 7.5 percent can also be seen on a positive light. So, the government might achieve the inflation target if takes serious measures to strengthen supply system in market.

While talking about the targeted economic growth and inflation rate, we should have closer look over past budget and GDP. Last year’s budget was 36 percent of the total GDP while the expenditure was only 31 percent. Country’s GDP is sure to grow as the government has set growth target of 6.5 percent for the new fiscal year. On rough calculation, the proposed budget for Fiscal Year 2016/17 is 44 percent of the total GDP. With such a low spending capacity, country’s economy will not be able to bear this excess liquidity. Excess liquidity and growing demand will contribute to inflation. Thus the first thing we need to know is that Nepal’s current economy has excess liquidity and excess demand both of which are due to larger size budget size.

Similarly, economic survey shows that money supply is increasing with every passing year. Our economy is troubled simultaneously by two aspects - excess liquidity of the government and excess liquidity is the banking sector. This double trap will certainly bring inflation. This can also widen deficit and hit other external sectors hard. This situation, however, will not affect exchange rate.

The central bank can also adopt direct policy to make the monetary policy tight.  This means that the central bank can marginally increase bank rates which will absorb excess liquidity. This will help to control inflation.  With a tight monetary policy, inflation can be contained within single digit. Inflation can also be contained within the targeted 7.5 percent because current inflation rate of India is only 5.6 percent which will affect inflation in Nepal too.

However, one of the bad consequences of tight monetary policy is that the interest rate will grow marginally.

(As told to Kuvera Chalise, Sagar Ghimire and Sujan Dhungana)

HEART TO HEART: Maintaining balance is the key

The number of foreign tourist arrivals in Nepal encouraging during off season: NTB
5 hours ago

Nepse inches up 4.97 points, while daily turnover amount dips to Rs 1.76 billion on Wednesday
8 hours ago