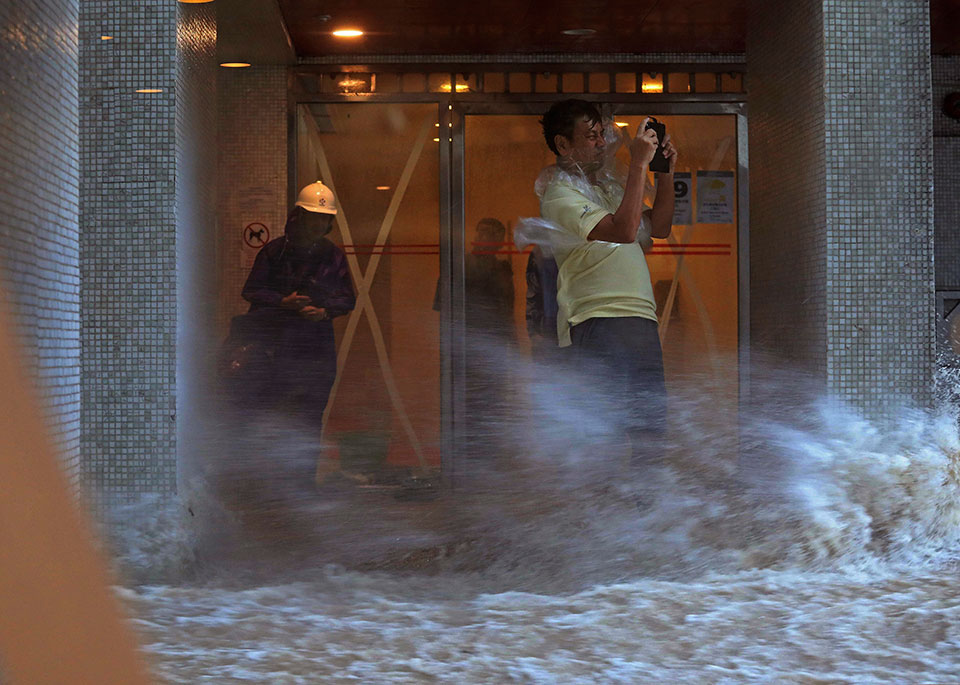 A man takes pictures against strong wind caused by typhoon Hato at a housing area in Hong Kong, Wednesday, Aug. 23, 2017. A powerful typhoon barreled into Hong Kong on Wednesday, forcing offices and schools to close and leaving flooded streets, shattered windows and hundreds of canceled flights in its wake. (AP)

HONG KONG, Aug 24: The most powerful typhoon to hit the southern Chinese region in more than half a century left at least 16 dead as a sudden deluge swamped the gambling hub of Macau, submerging streets and stranding residents.

Macau said Thursday that eight people were killed in the former Portuguese colony, including two men found overnight in a submerged parking garage. Another 153 were injured amid extensive flooding, power outages, and the smashing of doors and windows by high winds and driving rain.

"It's a calamity, the losses are high and a lot of buildings need repair," said Macau lawmaker Jose Pereira Coutinho, adding that he heard from many people who still had no water or electricity a day after Typhoon Hato tore across the 30-square kilometer (19-square mile) territory.

Coutinho said the flooding was at its worst in the older parts of the city's downtown, where narrow lanes date back from Macau's time as a Portuguese colony for more than four centuries.

"People were just swimming, they cried for help. There were no boats. The water came so suddenly," said Coutinho, who slammed the city government for having "reacted so slowly and so badly."

The chief executive of Macau's local government, Chui Sai On, ordered measures to "further the relief efforts," the Government Information Bureau said in a statement Thursday.

Macau, which is surrounded by water, is vulnerable to high tides and has few options for draining storm runoff. The territory took almost a direct hit from the storm as it churned toward mainland China.

Its reliance on the mainland for electricity compounded problems. Power cuts in neighboring Guangdong province, which supplies nearly 90 percent of Macau's electricity, cascaded into outages across the city, forcing casino operators, a hospital, and the city's mobile phone company, CTM, to switch to backup generators.

CTM also said two equipment rooms were seriously damaged by flooding, affecting telecommunications service in the area. Power utility CEM said Thursday it was restoring service but about 40,000 customers remained in the dark because of damaged power supply facilities.

China's official Xinhua News Agency said eight more people were killed in Guangdong and one person remained missing. Typhoon Hato roared into the area Wednesday with winds of up to 160 kilometers (100 miles) per hour. It weakened into a tropical storm Thursday as it moved farther west inland.

Xinhua said almost 27,000 people were evacuated to emergency shelters, while extensive damage to farmland due to the heavy rain and high tides was also reported. Almost 2 million households lost power temporarily, while fishing boats were called back to port and train services and flights suspended, Xinhua said.

By Thursday, a weaker Hato was moving into China's Guangxi region.

Flooding and injuries were also reported in Hong Kong, which lies across the water 64 kilometers (40 miles) from Macau, but there were no reports of deaths. Hato's fierce gales blew out windows on skyscrapers in the Asian financial capital, raining shattered glass onto the eerily quiet streets below. Hong Kong's weather authorities had raised the hurricane signal to the highest level for the first time in five years.

Three of the earlier deaths in Macau were men, aged 30, 45 and 62. One fell from the 11th floor of a building, one was hit by a truck and another was killed when the wind blew down a wall. Two others, a man aged 48 and a woman, 44, died from drowning, according to a press statement. No information was given for the remaining victim.

HONG KONG, August 24: The most powerful typhoon to hit the southern Chinese region in more than half a century left... Read More...

HANOI, (Vietnam), Oct 17: A Floods triggered by heavy rains have killed 24 people and left four others missing in... Read More...