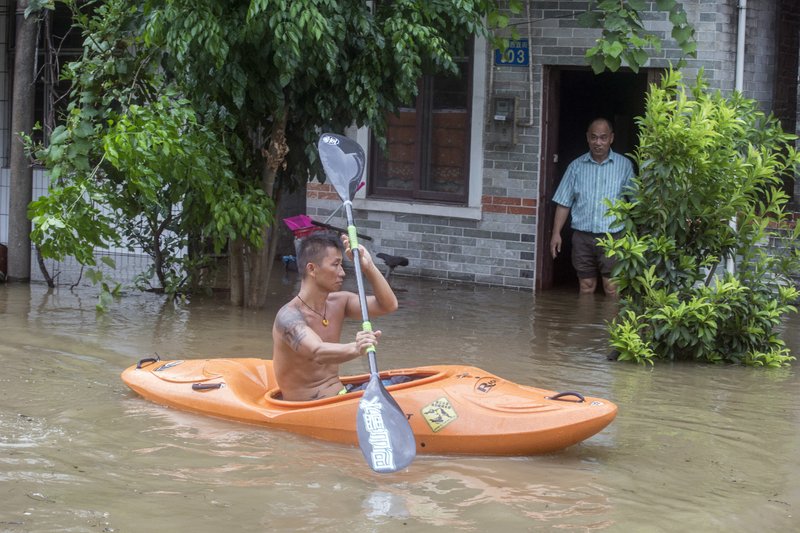 HONG KONG, August 24: The most powerful typhoon to hit the southern Chinese region in more than half a century left at least 12 dead as a sudden deluge swamped the gambling hub of Macau, submerging streets and stranding residents.

Macau said Thursday eight people were killed in the former Portuguese colony, including two men found overnight in a parking garage. Another 153 were injured amid extensive flooding, power outages, and the smashing of doors and windows by the high winds and driving rain.

“It’s a calamity, the losses are high and a lot of buildings need repair,” said Macau lawmaker Jose Pereira Coutinho, adding that he heard from many people who still had no water or electricity.

Coutinho said the flooding was at its worst in the older parts of the city, where narrow lanes date back from Macau’s time as a Portuguese colony for more than four centuries.

“People were just swimming, they cried for help. There were no boats. The water came so suddenly,” said Coutinho, who slammed the city government for a slow response.

Residents waded in waist-high murky water and rows of city buses sat half-submerged on city streets, according to photos circulating among residents.

China’s official Xinhua News Agency said four more people were killed in the neighboring province of Guangdong and one person remains missing. Typhoon Hato roared into the area Wednesday with winds of up to 160 kilometers (99 miles) per hour. It weakened into a tropical storm Thursday as it moved farther west inland.

Xinhua said almost 27,000 people were evacuated to emergency shelters, while extensive damage to farmland due to the heavy rain and high tides was also reported. Almost 2 million households lost power temporarily, while fishing boats were called back to port and train services and flights suspended, Xinhua said.

By Thursday, a weaker Hato was moving into China’s Guangxi region.

Flooding and injuries were also reported in Hong Kong, which lies across the water 64 kilometers (40 miles) from Macau, but there were no reports of deaths. Hato’s fierce gales blew out windows on skyscrapers in the Asian financial capital, raining shattered glass onto the eerily quiet streets below. Hong Kong’s weather authorities had raised the hurricane signal to the highest level for the first time in five years.

The earlier deaths in Macau were men, aged 30, 45 and 62. One fell from the 11th floor of a building, one was hit by a truck and another was killed when the wind blew down a wall.

HONG KONG, Aug 24: The most powerful typhoon to hit the southern Chinese region in more than half a century left... Read More...

BEIJING, Sept 16: At least eight people have been reported dead after a powerful typhoon lashed much of southeastern China... Read More...