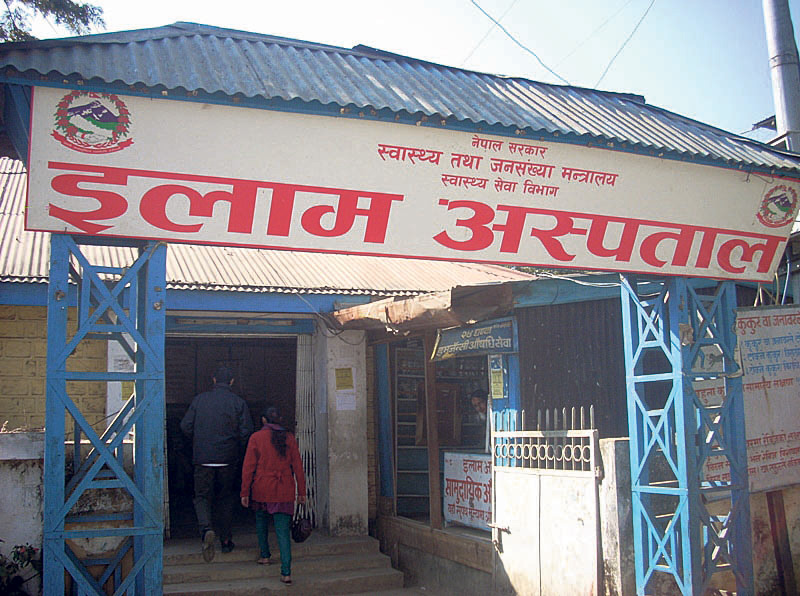 This recent photo shows District Hospital Ilam, where patients complain that they do not get proper service. Bhim Chapagain/Republica

ILAM, Feb 18: In the hope of getting better health services than in their villages, dozens of people from the remote areas throng the district hospital in Ilam everyday. However, neither are they supplied with adequate free medicines nor do they get to meet the doctors when needed. The service seekers lament that their hard journey to the hospital goes in vain most of the times. And during emergencies, their lives are simply at risk.

The 50-bed district hospital has sanctioned positions for 17 doctors - 10 specialists, five medical officers, one dental surgeon and one gynecologist. But currently, it has only two doctors - a dental surgeon and a gynecologist. Similarly, though there are sanctioned positions for five Auxiliary Nurse Midwife (ANM) and one health worker, there are only four ANMS and a health worker.

“Only 35 of the 64 sanctioned positions at the hospital are filled at present. The lack of enough staff including doctors and nurses has obviously impacted the services provided by the hospital,” said Rita Adhikari, information officer at the hospital.

The hospital earlier had 25 beds. To upgrade it to a district level hospital, 25 more beds were added. “Beds were added to make it a 50-bed hospital. But no attention was paid to upgrading other infrastructures and adding new facilities. So, the hospital has more beds now but no corresponding facilities,” Adhikari noted, “The greatest problem is the lack of adequate human resource.”

Over 50 patients visit the hospital on a daily basis. But most of them are referred to elsewhere. Adhikari stated that the health posts refer their patients to the district hospital, but due to the sorry state of the hospital, they are again referred to other hospitals. “In fact, people have gradually stopped coming here because they know they won't find the doctors here. Sometimes, we don't have enough stock of medicines, either,” she said.

Adhikari further revealed that there are not enough staffers or health workers even at the health posts and primary health centers in the district. This has forced people in the district to go to India when they fall sick.

Meanwhile, Pasang Gyaje Shrepa of Nayabajar stated that people in the district have no choice other than going to Jhapa, Dharan, Biratnagar or Kathmandu for treatment. Many also go to Siliguri of India, he said. “Our district hospital provides no good services. In the villages, we have no doctors or health workers. They don't provide medicines,” he said, “People are forced to travel long distances even for small health reasons.”

SIRAHA, April 17: The district hospital in Siraha, the Tarai/ Madesh district in State 2 has experienced an acute shortage... Read More...