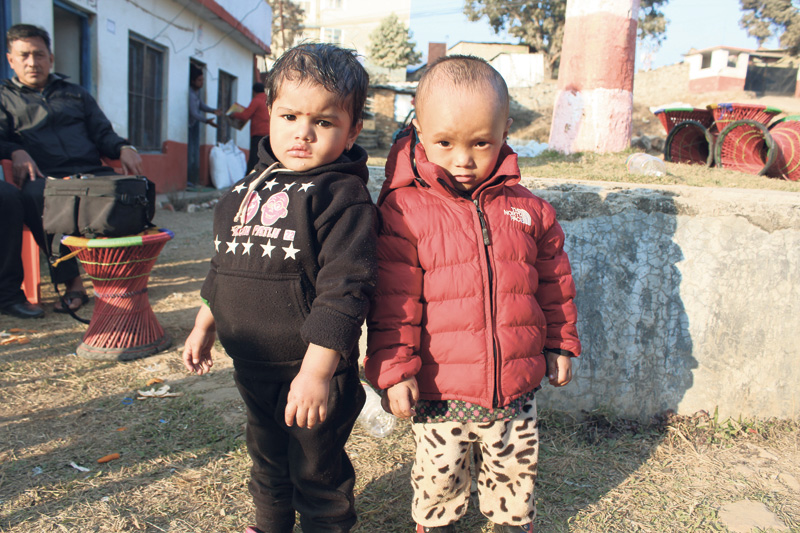 Suchak Thapaliya (left) and Badal Tamang are forced to live in Dhading prison as their mothers are serving jail terms. Shankar Shrestha/Republica

DHADING, Feb 18: Justice demands it that the punishment for a crime is borne by the one who commits it but there are some innocent children in Dhading who are being punished for no fault of theirs.

As many as five little children who are supposed to spend their time in school learning alphabets are spending their lives behind the grim walls of prison in Dhading, as their parents are serving jail terms. These children, who can't even speak properly, are forced to pay for the crimes committed by their parent's.

Two-year old Suchak Thapaliya of Salyantar is one such child who is living a life of prisoners for the past ten months. There was no one to look after him when his mother Susmita and father Chandra Prasad were both jailed in a criminal case. So, Suchak was compelled to live in jail with his parents.

Similary, eight-year-old Badal Tamang of Sertung is living a life of hell in the jail as his mother has been jailed for murder. Likewise, Misan Chepang of Thakre, Barsha BK of Katunje and Devimaya BK of Lapa are compelled to live behind the bars due to the faults of their parents.

According to the law, if a child commits any kind of crime, s/he is kept in Child Correction Homes. Sita Ram Adhikari of INSEC Dhading said, “This is a major violation of human rights when children below five years aare deprived of their fundamental right to education.”
There are many organizations claiming to be working for the welfare of children but so far none has taken any initiative for the rescue of these children.

It is really heartbreaking to see these innocent kids living on just two square meals a day. They are completely alienated from the outer world and cannot play, read or do anything that other kids do.

Madan Kumar Shrestha, Jailor at the District Prison, Dhading, informed Republica that the children in the jail keep getting ill due to cold. Besides getting 100-200 gram of rice a day, the children get nothing to eat. “The situation has gotten even worse as a cell meant for five prisoners is shared by 20 inmates,” Shrestha added. The prison is so crowded that a room for keeping five female prisoners has 20 prisoners and a room meant for 35 male prisoners is being shared by 181 male prisoners.

Caption: Suchak Thapaliya(red shirt) and Badal Tamang(black shirt) are forced to live in Dhading prison as their mothers are serving jail terms.

The sad thing is that parents know what’s wrong with their child but instead of trying to correct it they... Read More...

KATHMANDU, July 14: There is a state of lawlessness in the market as state agencies are becoming increasingly unable to... Read More...