The International Cricket Council (ICC) approved the selection led by head coach Binod Das. The closed-camp for women cricketers started on December 19 in Kathmandu for the T20 Smash which is seen as ideal opportunity to prepare for the upcoming ICC Women’s World T20 Qualifier Asia 2019.

Aarati Bidari is the new name in the squad along with Kabita Kunwar, Bindu Rawal, Roma Thapa, and Dolly Bhatta. Ritu Kumari Kanujiya, Suman Bist, and Sabnam Rai are named reserve players for the tour.

Amrita Poudel will help head coach Das in the tour after being named as team manager, whereas Sakuna Dani is announced as physiotherapist.

Teams from Bhutan, Hong Kong, Indonesia, Malaysia, Tanzania, Thailand, SL Navy, Kuwait, and Namibia will participate in the upcoming T20 Smash. Nepal will start its first match on January 12 against Tanzania at the Terdthai cricket ground. It will also play against Namibia, Indonesia, and Kuwait as the tournament progresses. The final will be played on January 18.

Similarly, Nepal will go head to head with China, Hong Kong, Kuwait, Malaysia, Thailand, and the United Arab Emirates (UAE) in the Asia qualifiers. The tournament will be played in round robin format, and the winner of the tournament will get a spot in the 2019 and ICC Women’s Cricket World Cup 2020. The fixture of ICC Women’s Qualifier Asia is yet to be announced.

Nepal women’s cricket team will be travelling to Thailand on January 11, 2019. 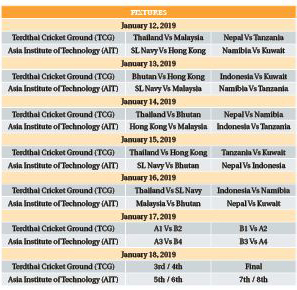