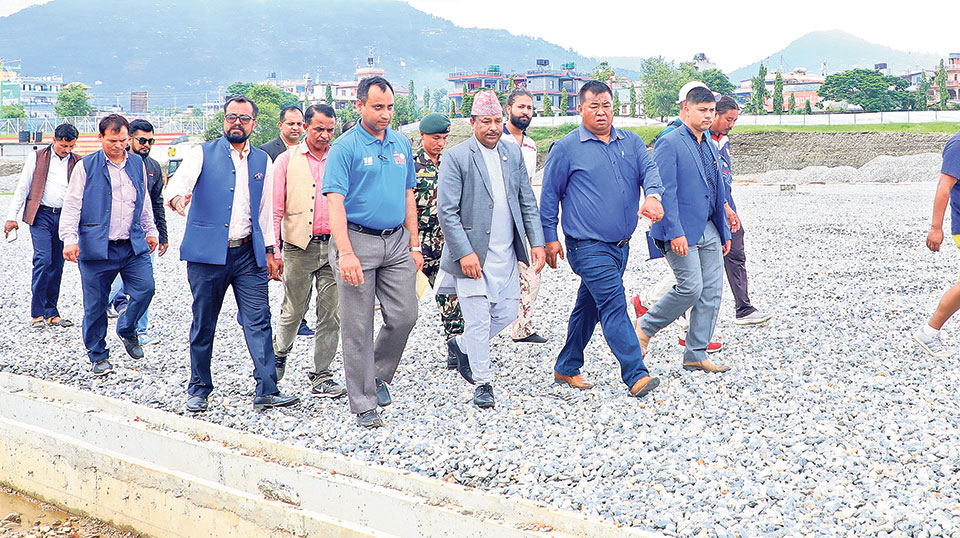 POKHARA, July 24: Minister for Youth and Sports Jagat Bahadur Bishwakarma has asked the public not to have any doubts on the organization of the 13th South Asian Games (SAG) as scheduled.

After visiting the under-construction stadiums and inspecting the infrastructure in Pokhara on Tuesday, Minister Bishwakarma said that the games will be played in the stipulated dates.

Stating that he had already sent invitations to the participating players, Bishwakarma said: “Don’t doubt whether the games will be organized on time. There is no reason why the SAG will not be organized.”

He also requested all sports lovers and well-wishers to support organization of the games in a grand way and extend wishes to Nepal’s players to win as many medals as possible, rather than doubting about the games.

Bishwakarma stated that early preparations for the SAG have already started and that they will not let any stones unturned to allot the required budget. “The government is committed to organize the SAG. The prime minister, ministers, National Sports Council, Nepal Olympic Committee, and other authorities are all committed toward it,” Bishwakarma added, “We will not let budget be any issue for the games.”

He further stated that they will speed up preparations by forming 14 or 15 sub-committees for the SAG.

Saying that organizing the games would be an opportunity to make Nepal proud, he asked the public in helping the authorities hosting the games in a civilized, fair and grand way.

Minister Bishwakarma claimed that the Dasharath Stadium in Tripureshwar will be fully prepared before the SAG starts. According to him, except reconstructing the VIP parapet, all other works have been completed in the stadium.

He informed that the under-construction VIP parapet in the stadium will be completed by October 10 for the inauguration of the SAG.

Games like taekwondo and karate will be played at Satdobato. The infrastructures for shooting and lawn tennis have already been completed, the minister said, adding that only the swimming-related structures remained to be completed.

“The games that were announced to be held in Pokhara won’t be played anywhere else,” clarified Minister Bishwakarma, adding: “The budget for construction will soon be passed. The construction won’t stop in lack of money.”

He announced that even though budget for archery and squash was already allotted for Fiscal Year 2019/20, additional budget will also be provided to these sports.

“There was a misunderstanding before. The construction company prepared an artificial ground and started leveling the gravel then. But, as soon as we found it out, we stopped that work and directed to prepare a natural ground,” Bishwakarma added.

He made it clear that it would have been a misfortune if the artificial ground, after spending tons of money, were disqualified for international status.

“We have already made agreements with the construction company and they have said that they will ready the stadium on time. The women’s football will be played in that stadium,” he further claimed.

He also added that there will be an international level cricket pitch in the Pokhara Stadium. He said that budget has already been allotted for the construction and the remaining funds will also be provided.

KATHMANDU, Nov 24: The 1999 South Asian Games (SAG) was a historic year for Nepali sports when the host nation... Read More...

KATHMANDU, Aug 5: The Education and Health Committee of the Federal Parliament has formed a sub-committee for the preparations of... Read More...

Think big and bold
18 hours ago

Indian officials warn of lockdown extensions as COVID-19 cases in South Asia near 6,000
7 hours ago

Amid coronavirus outbreak, PM Oli holds telephone conversation with his Bahrain counterpart on safety of Nepali migrant workers
10 hours ago

Lockdown could be extended by another week to control spread of coronavirus : MoHP
10 hours ago
At least nine Nepali migrant workers infected by coronavirus in Bahrain
14 hours ago