Politicians let us down: Flood victims 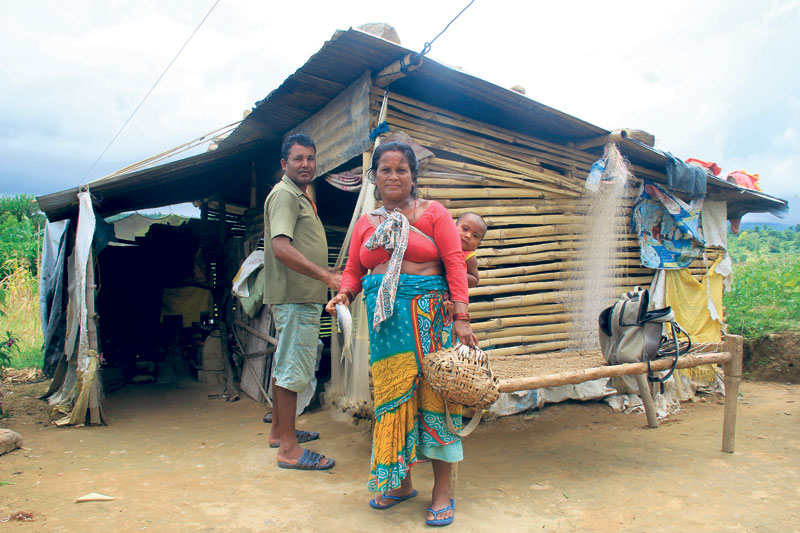 Members of flood-displaced family in Dang outside their makeshift hut in this recent picture. The family has been living in the hut for two and half years after their house was washed away by flood in August 2014. Photo courtesy - Abhilash Raj Bhandari

The government is only concerned about the earthquake victims and it has in some ways assisted them, compared to what we received.

DANG, Jan 23: Three days after the devastating flood swept away houses and killed dozens of people in Dang and Surkhet in August, 2014, the then Home Minister Bam Dev Gautam rushed to the affected areas to meet the victims.

The victims were assured that the government is with them and that they need not worry. Resettlement was promised to the homeless; relief was announced for the families of the deceased and injured. Gautam got back to Kathmandu, but the victims feel that the promises are yet to be fulfilled.

It was not only Gautam who had seen for himself their plights. The then Minister for Commerce and Supplies Sunil Bahadur Thapa also reached out to the flood ravaged area and spent hours with the families. “I have come here as per the will of our PM Sushil Koirala. The government is quite moved, something would be done for your settlement. Do not worry,” he told them. Recently when Republica inquired about it, Thapa told that he had submitted the detailed report to the PM without delay. And that was all he knew about the case.

Few months later, the then President Ram Baran Yadav appeared in the Dang to see for the victims. The then Minister for Irrigation NP Saud, who was accompanying the President, said “His honorable president is here to see for himself the plights of the people. He is very serious about providing relief to the victims. Settlement process would no more be delayed now.”

Later Minister of State for Commerce and Supplies, Girbahadur KC also left no stone unturned to make the victims feel that he would be the one who would be their real refuge. “The government became lethargic. You have suffered a lot. Now, things will change for good, please do not worry about resettlement,” he voiced. He never came back to the place again or ever updated them of what he was doing for the victims.

Then it was turn of a senior leader of Nepali Congress, Sher Bahadar Deuba to distribute assurances. “Hardly anyone is left to visit us and deliver assurances. This includes the veteran leader Sher Bahadur Deuba. Many senior leaders, lawmakers and ministers frequented here, but nobody ever delivered the promises they made to us,” lamented Dev Ram Kushari, secretary of the Flood Displaced Struggle Committee.

For the past two and half years the displaced have been living without a proper home. In lack of farms or any means of income generation, they are living in extreme poverty. But their miseries have failed to touch the government, they say.

“The government is only concerned about the earthquake victims and it has in some ways assisted them, compared to what we received. But hundreds of flood affected families have been waiting for its support to restart their life. But to no avail,” Kushari said. “Victims who lost houses and their farms have been expecting relief packages from the government to assist in their rehabilitation. The government should have come up with plans to address these expectations. When our lives were shattered by the disaster, the government should have provided immediate assistance,” he asserted.

At different times, the government announced different relief packages for the victims. But, the victims, whether landless or with land, say that not even the first installment of the announced grant was distributed to all of them. “As the first installment of the grant, we were supposed to be provided Rs 125,000. But still most of us are yet to receive this. This is very disappointing,” Kushari said.

“It’s been very long since the government has been promising of building houses for us. But as you can see, nothing has happened so far,” said Jaguram Chaudhari, a flood victim from Tulasipur. “We would have rather felt better if the government had never raised false hope,” he added.

Another flood victim Dhaniram Chaudhari stated that ‘all the politicians are lair’. “When they really had no intentions of doing anything for us, why did they promise? They used our pathetic condition to receive media limelight. They tried to show that they are responsible leaders, but they are not”, he asserted. There are over 500 flood victim families in Dang alone.

KATHMANDU, Oct 12: The French government has provided a humanitarian aid of euro 100,000 to Handicap International Nepal (HI) for... Read More...

MAHOTTARI, Aug 15: Mahottari district, which is presently struggling with floods, is now under threat of epidemic outbreak. Over 40,000... Read More...