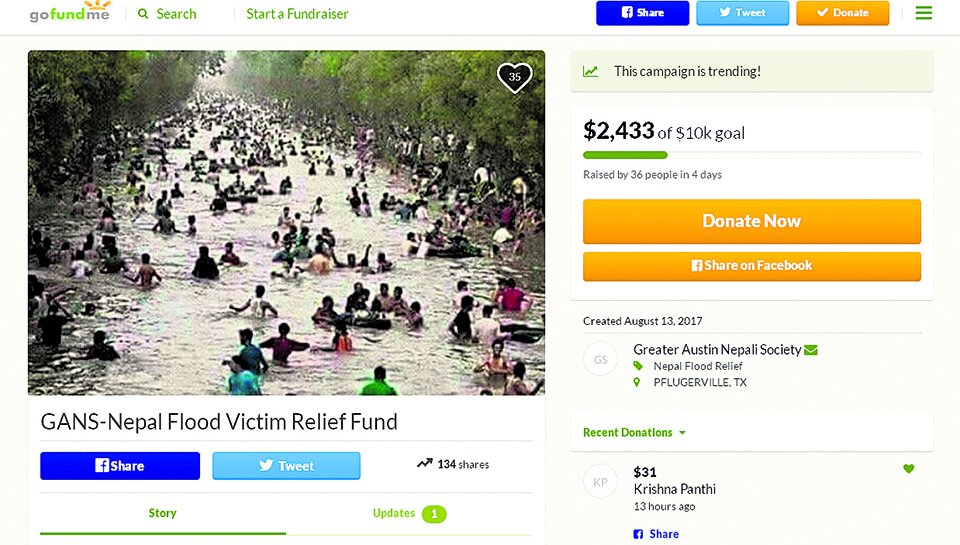 KATHMANDU, August 19: Moved by the plight of fellow-Nepalis, thousands in the Nepali diaspora have been donating through crowd funding  for the relief of flood victims. Over 100,000 US dollars has been raised through various fund raising platforms as of Friday.

A fund raising campaign under the heading Nepal Flood has been trending in GoFundMe, which claims to be the world’s largest social fundraising platform.

As many as 2,500 results for Nepal Flood-related campaigns are shown in the single fund-raising platform. Hundreds of campaigns have been raising donations although some have failed to raise anything so far.

The Nepali diaspora and  foreigners also have been running such campaigns and collecting donations from both Nepalis and foreigners, through fund raising sites including generosity, youcaring, crowdrise, indiegogo and others.

Various organizations and individuals had raised millions of rupees through such sites in the aftermath of the big earthquake also.

Crowd funding has become the fastest and easiest way to collect funds for the needy across the globe. But delivery of the funds to those intended  has been questioned  due to lack of monitoring mechanisms.

Many campaigns have been found using fake photos to sway people into donating. The addresses of many fund campaign organizations can’t be reached, but they are still getting donations of hundreds to thousands of dollars.

Many other campaigners have been using photos of flooding in Bangladesh and other countries purporting to show the devastation in Nepal.  Many of them have not explained their delivery mechanisms.

The government has adopted a one-window policy for distributing relief to  flood victims. Regulating and monitoring donated funds has become a global issue because the government  cannot trace the uses of the funds. Crowd funding sites allow donors to track the progress of their funding, but don’t provide any details about the spending.

“To my knowledge only 60 to 70 percent of people send the raised funds to Nepal through the personal accounts of  friends or relatives. But no one regulates whether such funds are spent for the needy or go somewhere else,” added Bhattarai.

KATHMANDU, August 26: Nepali Congress (NC) has raised Rs 10.69 million for the relief of victims of the recent floods... Read More...