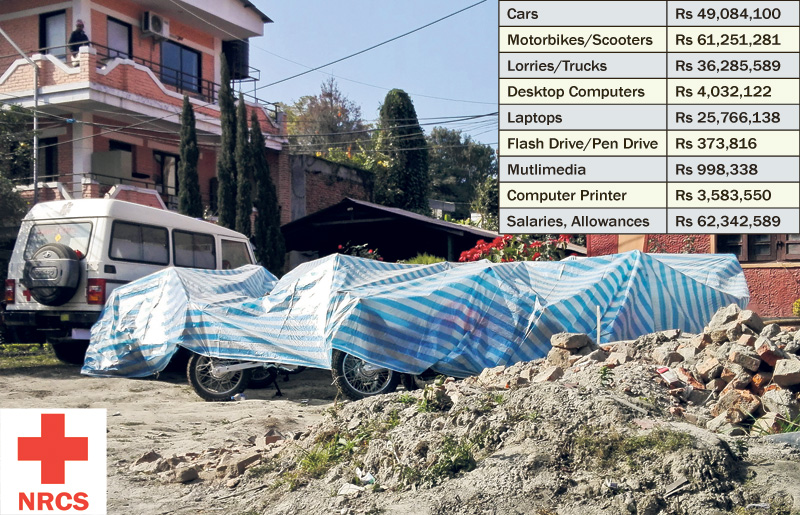 KATHMANDU, Jan 11: Nepal Red Cross Society (NRCS) has been found splurging millions meant for earthquake victims on administrative activities and the purchase of  various luxury items instead of channelizing the hefty amounts  into the real tasks of earthquake reconstruction and rehabilitation.

Documents obtained by Republica show that NRCS has already spent Rs 245 million given by various donors for reconstruction activities on salaries and allowances for its officials, foreign trips, the setting up of a sophisticated office, and the purchase of items like cars, motorbikes, scooters, computers, pen drives and other accessories.

The documents show that NRCS has already spent Rs 62.3 million on salaries, honoriums for steering committee meetings and allowances. Sources say Nepal Red Cross spent much more than stated on a number of meetings and purchases.

The humanitarian organization has been found paying hefty amounts and without any fixed criteria to its office bearers and staff working for its Emergency Response Operation (ERO) unit. The unit runs various post-earthquake projects in the 14 most quake-affected districts.

Interestingly, NRCS has been paying Rs 40,000 to Bhatka Khawas, a member of NRCS's high powered committee formed to oversee reconstruction activities of the ERO unit, as a monthly salary even though he has been living in Canada for the last few months, according to a highly placed source at NRCS.

Likewise, other staff working for the unit at the central and district levels have also been receiving unusually high salaries. A program manager receives up to Rs 121,500 monthly while project coordinators are receiving Rs 101,500. The staffers have also been given Dashain and other allowances. Around 70 staffers are working at the central level of the ERO unit while more than five staffers have been deployed at the district levels.

“Firstly, there is no salary standard for staffers in the unit and the monthly salaries are unusually high. NRCS officer bearers have been giving  out salaries arbitrarily as a majority of the staff are related to them one way or other,” an  NRCS official told Republic seeking anonymity, adding, “Chairman Thapa and other officer bearers have hired relatives to the unit.”

Salary details obtained by Republica show that there is a discrepancy in salary among officials in the unit working in the same position.

Likewise, the documents also show that Chairman Thapa has received Rs 250,000 as pocket money for his Geneva visit and Rs 72,735 for a visit to Thailand, among others.

“A huge amount of money issued in the name of NRCS is being spent on salaries and various luxurious items. Facilitates and salaries given to staffers overseeing reconstruction are no less than for I/NGOs officials. It is unfortunate that the office bearers are taking money meant for quake affected victims,” an official said.

The official said that various donors have provided Rs 9 billion to NRCS for reconstruction and rehabilitation activities. “There hasn't been any real work on the ground. Red Cross is busy buying expensive items for its headquarters in Kathmandu,” said a highly placed official source.

Earlier, Republica had found Nepal Red Cross spending more than Rs. 7 million for a lavish meeting at a fancy hotel in Chitwan.

KATHMANDU/CHITAWAN, Dec 28: The Nepal Red Cross Society (NRCS) has been found to be spending millions meant for the earthquake victims... Read More...

Differences between the couple after engagement
47 minutes ago