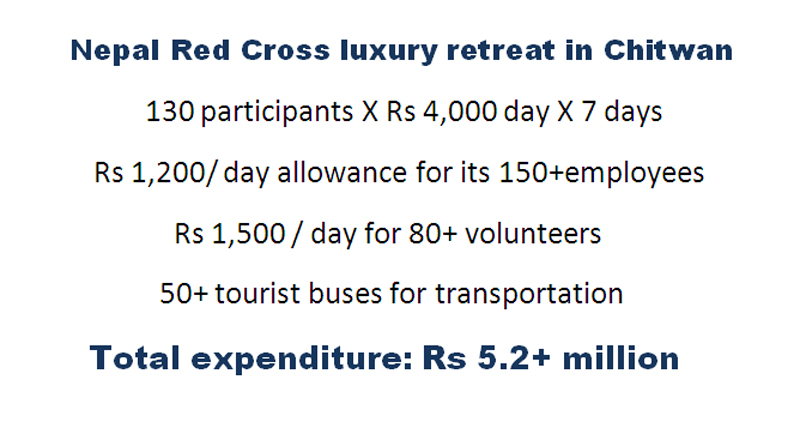 The money spent in luxury hotels was meant for earthquake victims

KATHMANDU/CHITAWAN, Dec 28: The Nepal Red Cross Society (NRCS) has been found to be spending millions meant for the earthquake victims in a single event held at luxury hotels to evaluate its yearly activities.

Senior NRCS officials informed that the humanitarian organization is spending over Rs 7 million just for its yearly review meetings being held in Sauraha, Chitwan. NRCS organized a week-long event to review its work carried out in the health and disaster management sectors.

A senior official, who is attending the event in Sauraha, informed that the top officials decided to organize the event there, spending huge amount of money even though it could have been convened at the NRCS' own training center at Banepa.

"Those in the organization's leadership didn't organize the event at the training center because they wouldn't get any commission or other benefits that they received from the hotels," said the senior official requesting anonymity.

The official claimed that if the event had been organized at the training center, NRCS could have saved at least 60 percent of the cost.

According to the official, altogether over 130 individuals are participating in the event and the organizer has been paying at least Rs 4,000 per person per day for their accommodation at various hotels in Sauraha. The organization pays Rs 1,200 per head as daily allowance to its employees and Rs 1,500 per head for the 80 volunteers from various districts who are participating in the review meeting. Officials from the home and health ministries are also attending the event. Just the hotel costs for the participants comes to more than Rs 3 million.

"During the current off-season, hotel costs in Chitwan is around Rs 1,500 per day, as opposed to Rs 4,000 we are paying. This is because the higher-ups receive hefty commissions from the deal," said a senior official attending the event.

Additionally, those presenting papers and carrying out other assignments are paid thousands of rupees.

A total of 50 NRCS staff and every single staff from its headquarters in Kathmandu are in Chitwan for the event.

NRCS President Sanjiv Kumar Thapa admitted that the organization is spending at least Rs 5.2 million for the event.

However, the senior official said that a huge amount of money, more than Thapa claimed, has been spent in an unseen manner.

"These are the formal and visible expenses. But they spend a huge amount of money for various other activities such as expenses for drinks and other food items that aren't stated in the official bills and activities like football games and other recreational activities that aren't related to the yearly review," said the official. "Also, there are expenses of top officials travelling by air and other luxury vehicles paid for by the NRCS who do not reflect in the event's bills."

Some officials attending the event informed that they feel like participating in a retreat and not a review meeting. "No debate is held to discuss why certain programs failed or succeeded nor any discussion is conducted to debate as to how we can get better results in disaster management," said a participant requesting anonymity. "Some of the presentations are made just for formalities."

Mona Aryal, director at the health department of NRCS, informed that the organization allocated Rs 165.8 million to spend in its activities in the health sector. Similarly, it earmarked Rs 320 million for disaster management for post-earthquake recovery in the worst-affected districts.