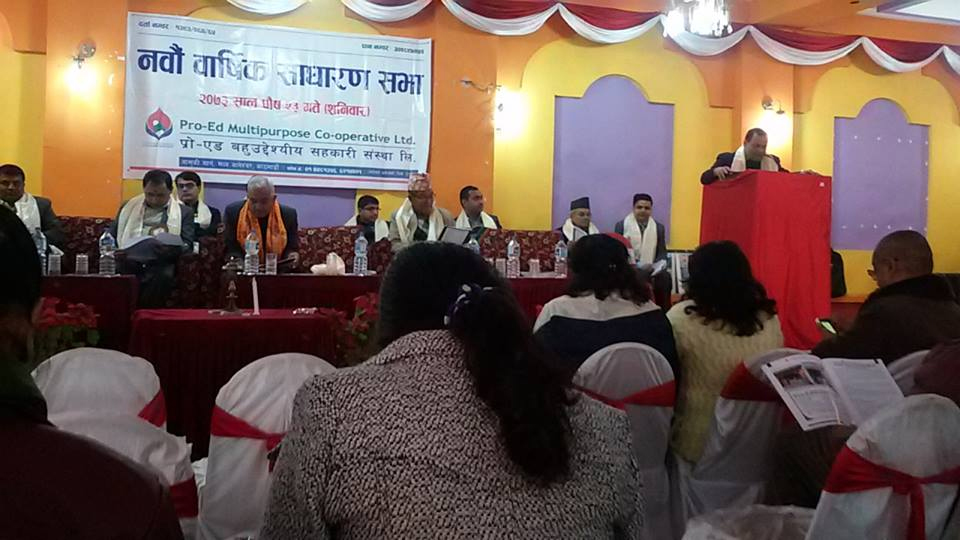 KATHMANDU, Jan 7: Pro-Ed Multipurpose Co-operative Ltd., a cooperative that mainly prioritizes education as the field for investment, has held its Ninth Annual General Meeting in Mid Baneshwar, Kathmandu on Saturday.

Held at Om Sai Catering and Party Place in Mid Baneshwar today, the Pro-Ed has made a net profit of Rs 10.969 million in the fiscal year 2072/73 BS which is up by 15 percent compared to the previous year, according to the AGM report.

In the fiscal year 2072/73 BS the report has posted Rs 14.353 million as institutional capital which is up by 38 percent compared to the previous year while the share capital is put at Rs 29.607 million.

Speaking at the AGM, DL Puri, Executive Chairman of the Pro-Ed Multipurpose Co –operative Ltd., said that the institute has made Rs 10.969 million net profit during the fiscal year 2072/73 BS – exceeding the proposed net profit by 15 percent.

Projecting his future plan, Puri said that he has plans to make Pro-Ed one of the leading co-operatives in Nepal, maintaining good-governance.

He claimed that 99 percent of the cooperatives, except Pro-Ed, operating in Nepal will be phased out once the Nepal government brings Cooperatives Act, 2072 BS into force.

Speaking on the occasion, Madhav Prasad Bhatta, promoter of Nepal Credit and Commerce (NCC) Bank, who  was invited as the chief guest of the program, said that participation, honesty and cooperation are the three essential keys to be followed while running cooperatives. Unlike in banks and financial institutes (BFIs), every shareholder – irrespective of how many shares they hold – enjoy equal right in cooperatives.

Bhatta stressed on the need to spread awareness of education on cooperatives among the people and suggested not to invest in a single field, saying that it will be risky as well as breach the norms and principles of the cooperatives.

Commenting on the financial report submitted at the AGM, Rishiram Dhakal, a shareholder, said that the AGM report is bereft of name-list of shareholders and staffers’ salary details while Madhav Prasad Bhatta called for timely holding of the AGM.

Pro-Ed Multipurpose Co-operatives had been established on February 13, 2008 embracing the norms, values and principles of cooperatives.

Similarly, the ninth AGM promoted Madhav Prasad Bhatta to the post of coordinator of the advisory committee while Dr. Narayan Prasad Chudal to the post of executive member. Previously Dr. Chudal was the member of Account and Supervision Committee of the Pro-Ed Cooperative.

The annual report was presented by Nawaraj Bhandari on behalf of the Account and Supervision Committee while the program was conducted by Subhash Chandra Bhandari.

Started in 2013 BS, currently there are 33,000 cooperatives operating in Nepal.

KATHMANDU, May 23: The 25th Annual General Meeting of Butwal Power Company Limited held in Kathmandu on Tuesday approved all the... Read More...

Cabinet meeting at 3 PM
44 minutes ago