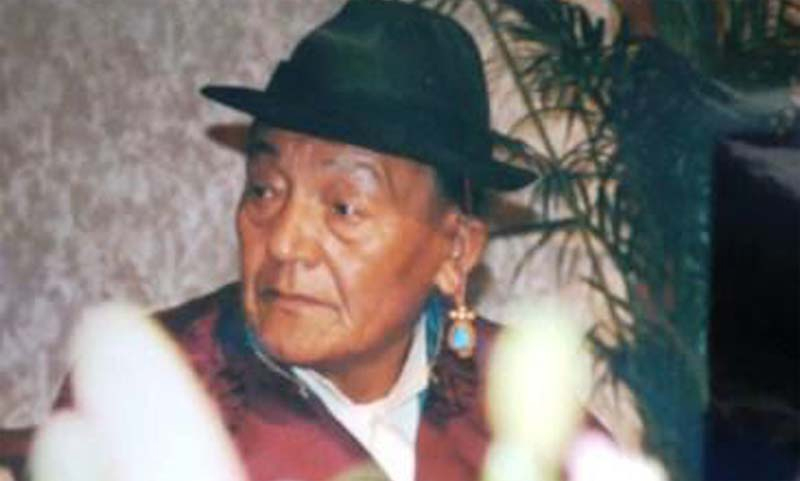 Bista, who was king of the remote district of Mustang from 1964 to 2008, died on Friday. He was 86. Mustang, a trans-Himalayan district, was a small princely state.

"During his last days, he repeatedly said he wished us to continue living in Mustang and serving the people there for their advancement," said Jigme Sinki Parbal Bista, son of the late king“We will not compromise in honoring his wishes.”  the son was participating in special rituals for the deceased being held at Jamchen Shakya Gumba, Bouddha.

“We plan to do much more in Mustang in the days to come,” Jigme Sinki explain amidst the chanting of monks and the sound of trumpets.

Tsering Tashi, vice-president of the Mustang Shakya Bouddha Union and a monk, said, “We will continue the special rites  until Sunday and on Monday the body will be cremated amidst a function in Kathmandu.”

Born in 1930 in Lo Manthang as the youngest son of Mustang King Angun Tenzing Tandel, the last king of  Mustang inherited the throne in 1964 and continued to reign for a few years even after Nepal was declared a republic.

As he and his wife Sidol Palwar Bista had no children, he had adopted Jigme Sinki as his son. A spiritual leader who never received any formal education, he was considered the preserver of Tibetan Buddhist culture in Mustang. Even after monarchy was abolished in Nepal, petty kingships continued to exist in the western parts of the country. These included Bajhang, Salyan and Jajarkot, apart from Mustang.

The Nepal government scrapped the Petty States and Rulers Act but had decided to allow the traditional rulers  to continue enjoying the title of petty kings for their lifetimes, without however any of the facilities and  prerogatives they enjoyed in the past.

Commerce Minister Romi Gauchan Thakali, who attended the rituals to console the family, said, “He was a true well-wisher and a guardian of the people of Mustang and will be remembered even though the political changes have redefined his status.”

After upper Mustang was opened for tourists the late king was popular among them, said Indra Dhara Bista, a social activist in Mustang.

According to him, Jigme Dorje Palbar suffered high blood pressure since the last 30 years and had been ailing with various age-related problems. Last Tuesday he was admitted to Om Hospital after complaining of a respiratory problem. He was diagnosed with acute exacerbation of pneumonia leading to respiratory failure and  put on ventilator support
The hospital pronounced him dead at 12:50 a.m. Friday . He had transferred to Kathmandu along with his family  after the palace in Mustag was weakened by last year's earthquake, and his health continued to deteriorate.

Ranahăr, historic fiction based on Last Malla King, to be launched on June 2

KATHMANDU, May 31: Fictionalized account of the historic portrayal of the last Malla King Ranajeet Malla written by a scholar... Read More...

LOS ANGELES, August 22: Jerry Lewis, the high prince of low-brow comedy on stage and in film as well as a... Read More...