KATHMANDU, June 15: The Upendra Yadav-led faction of Janata Samajbadi Party (JSP) has concluded that the Election Commission (EC) had failed to play an impartial, fair, and neutral role in relations to the party’s decision to take action against leaders close to Mahanta Thakur-led faction of the party.

Issuing a press statement on Tuesday, the JSP Chairman Upendra Yadav said that the election body had completely ignored the democratic norms, values, tradition, and system to recognize the decision taken by majority members in any political party’s central body. The reaction of JSP’s Yadav-led faction comes a day after the EC did not recognize the decision taken by majority members of the JSP’s executive committee to relieve general membership of a few members of the party including Mahanta Thakur on disciplinary grounds as per Clause 51 of the Political Party Act 2073 BS.

“We have concluded that the decision has shown that the Election Commission had failed to play an impartial and neutral role and that it had taken a biased decision,” reads the statement. “The decision has entirely breached, ignored and trashed the democratic norms, values, tradition, and system that recognizes the decision taken by majority members in any political party.”

Earlier, the JSP faction led by Yadav had expelled four of its office bearers through a majority-based decision and asked the EC to update the list accordingly. The EC on Monday argued that the action taken by both sides of the party was invalid.

Arguing that the EC had failed to take any decision on their request despite furnishing all relevant documents, the party has also alleged that the election body had failed to fulfill its own duty and constitutional and legal obligations.

The JSP has maintained that the EC had tweaked provisions of the Political Party Act 2073 BS, Political Party Regulation 2073 BS, and Nepal’s Interim Constitution as per its convenience to make decisions to favor section leaders in the party. While stating that the unilateral decision taken by the EC on JSP row cannot be acceptable to them, the party has also announced to intensify the political and legal battle against the decision.  While the Yadav-led faction of the JSP had voted against Oli during the crucial vote of confidence in parliament, the Thakur-led faction had chosen to stay neutral during the voting in parliament. The Thakur-led faction has already joined the Oli-led government. 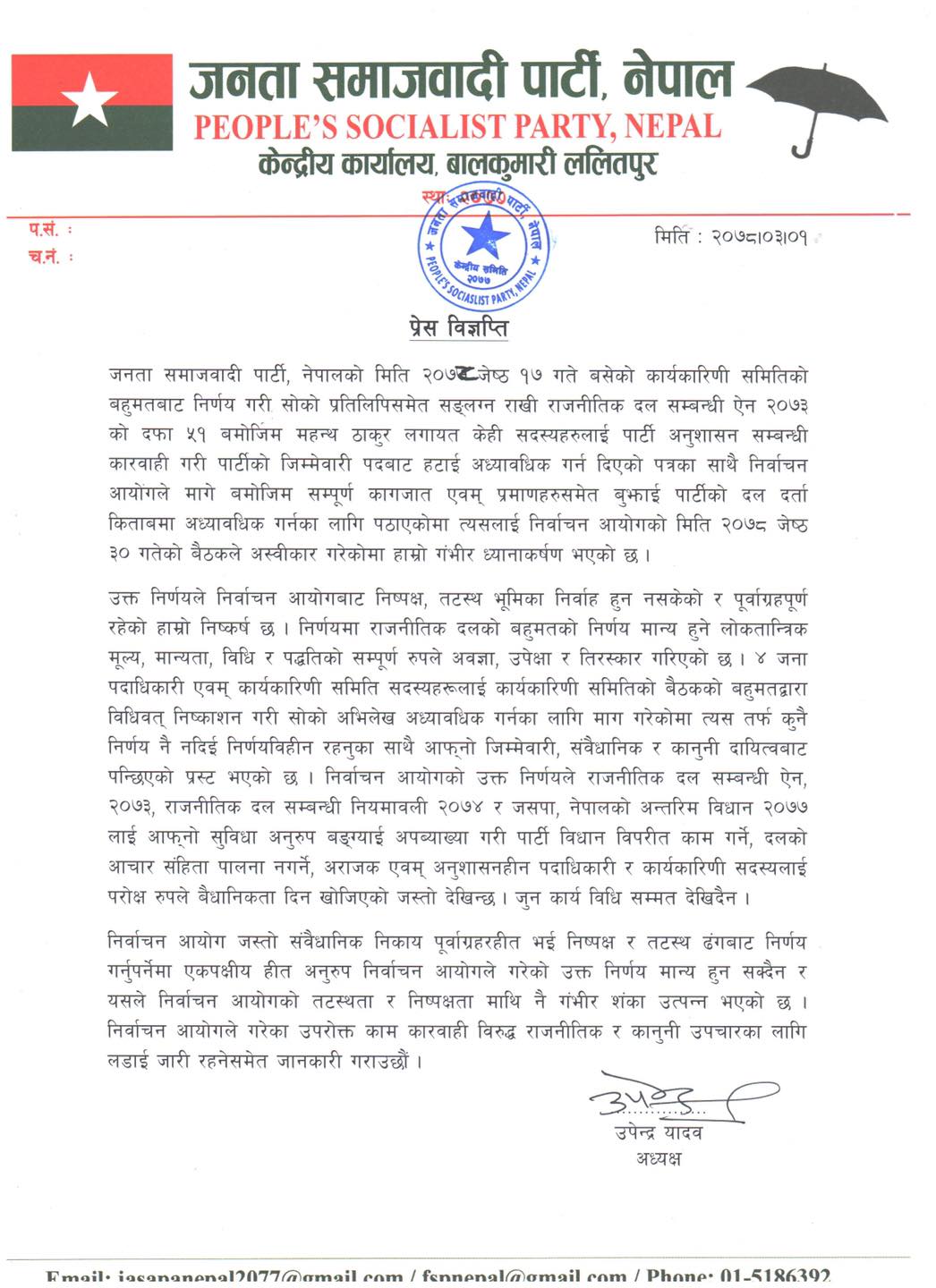 Why can’t PM be treated in Nepal?

Salaries and allowances of Speaker, Deputy Speaker withheld until court’s decision
17 minutes ago

Political practice of the past one and a half decades has established the inevitability of course correction: Ex-King Shah
47 minutes ago