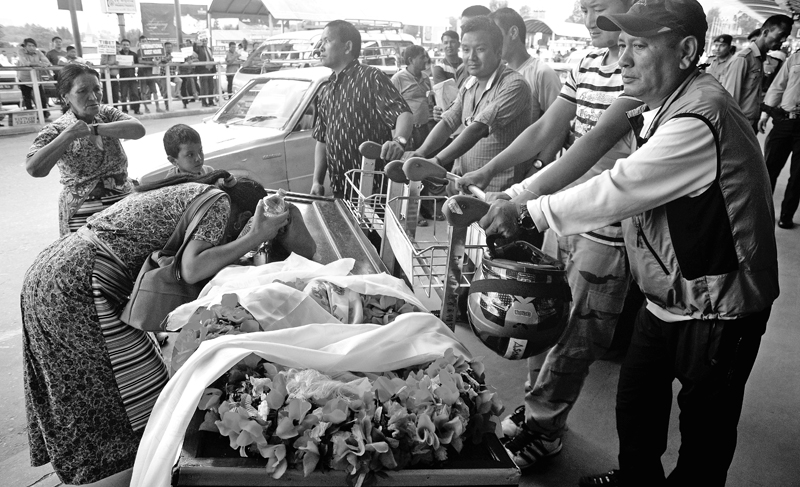 This 2013 file photo shows a sister hugging the dead body of Sona Sherpa who was killed by Taliban militants at Nanga Parbat base ca,p in Pakistan as relatives recieve the body at Tribhuvan International Airport.

Republica tracked the van drivers who do this demanding work day in day out.

When Dipendra Acharya, 36, began working as a coffin van driver some eight years ago, few people were prepared to carry the dead from the airport to the respective homes. The number of bodies arriving from the Middle East in coffins was also low. The drivers felt scared to carry the bodies in their vehicles.

Officials at the Foreign Employment Promotion Board used to approach available bus drivers or vehicle suppliers in Kathmandu to deliver the coffins to the homes of the deceased once they arrived at the airport. After making a delivery, the driver could go away with good money in his pocket.

Such earnings lured long-time bus driver Acharya to the coffin carrying business. Having settled in Kathmandu from Dharan, he had little idea how to deal with government officials.

So, he worked for Ma Dantakali, later becaming a partner for a while.

Acharya then set up his own outfit with a similar name in 2014. "Ma Dantakali Supplier Service Pvt Ltd  now has five vans and drivers," he said.

Acharya, who was busy clearing legal documents at the Foreign Employment Promotion Board, said that transporting coffins is a heartbreaking business. They face acute difficulties while handing over the bodies to the bereaved families. They do not wish to linger when family members start wailing and becoming distraught. So they get the relevent documents cleared with the local police before reaching the home of the dead individual. They then park their vehicle and position it so that they can whisk away immediately after delivering the coffin.

"We often see painful scenes where family members wail and faint on seeing the body of their loved one. We  try to escape from such heartbreaking encounters," said Acharya, who has reached 72 districts in the course of this work.

Coffins might land at the airport any time and the drivers have to stay alert round the clock.  "I take my job seriously," Acharya said.

The number of coffins arriving has been increasing along with the surge in migrant workers going aboard. Officials at the Board inform the contractors when the bodies arrive.

Selected firms arrange the coffin vans and drivers
Last year, the Board spent Rs 20 million delivering home the bodies of dead migrant workers. Out of the total amount, Rs 10 million was allocated for transporting bodies from Kathmandu to the respective villages, while the rest was spent bringing back the dead from South Korea. The Nepal government has to bring back bodies from Korea because Korean companies don't provide this service, according to Raghu Raj Kafle, executive director of the Board.

"Bringing the bodies of migrant workers staying illegally in labor destination countries involves the Ministry of Finance and the Foreign Ministry. The Board cannot bring back such bodies or transport them to the respective villages," he said.

Things have changed a lot since Acharya began his work as a coffin van driver. Until July 2014, the officials could ask any supplier or transport company to carry the dead. The Board now calls for public tenders, and competition is stiff. The Board has selected four companies for this fiscal year out of seven that were interested. Acharya's firm was one of the four.

"We will have coffins to transport until next fiscal year," said Tanka Prasad Pandey, 40, who is Acharya's partner.

The tender call was announced in July but the Board officials provided the needed official documents to the selected companies only last week. The four companies have a total of 20 vans between them.

According to the contract, Acharya's firm has been assigned the task of delivering the coffins of dead migrant workers from Morang, Sunsari, Nuwakot, Kavre, Dhading and Rasuwa districts. The other three firms--Seti Ganesh Suppliers Pvt. Ltd, Buddha Chhap Supplier and Mechi Kali Auto Centers-deliver coffins to other parts of the country.

Carrying coffins is a growing enterprise, with the flow of migrant workers increasing for lack of job creation in the country.

Economic development is sluggish and new job creation has been almost nil ever since the country went through a decade-long Maoist insurgency starting in 1996, followed by the political transition  from a unitary state under a Hindu monarchy to a federal republic.

The protracted transition has pushed more and more unemployed youths into foreign employment and increased the number of bodies coming back home in coffins.

However, despite the increased inflow of dead bodies, the earnings of coffin van drivers are decreasing as new companies join the busines. "More firms are interested in this work.

As a result, the government has also reduced the fares, but we also take this as a service to our country," said Pandey.

Coffin van drivers estimate that the Board has saved some 20 percent of its total budget through public tenders. Pandey, who started out in life driving a night bus along the Kathmandu- Jhapa road section, says the money he earns now is not enough to make ends meet. He has a son aged 13 and lives in a rented room in Bhaktapur. "It's only for the sake of continuing in a job we have been doing for so long and also because there is no alternative," he added.

A coffin van driver used to get Rs 12,000 once a dead body is transported to Rasuwa.

On average, above 1,500 people leave the country every day for work in 110 different countries that the government has allowed as work destinations. Over 700 manpower companies supply unskilled youths to the foreign labor market.

As of fiscal year 2014-2015, the government had issued permits to more than 3.8 million people to work in foreign countries other than India. The country received Rs 589.5 billon in remittances last fiscal year, which is 27.7 percent of GDP, according to the government. 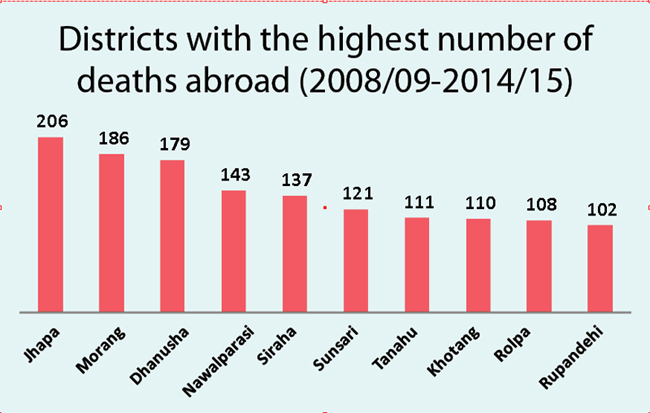 POKHARA, April 29: A lecturer has resigned to run for the top post of the Pokhara – Leknath Metropolitan City... Read More...

6 things you must know before a job interview

It isn’t unusual to get so excited about being invited for an interview that you forget to obtain some important... Read More...