12 workers trapped week ago in China mine blast are alive 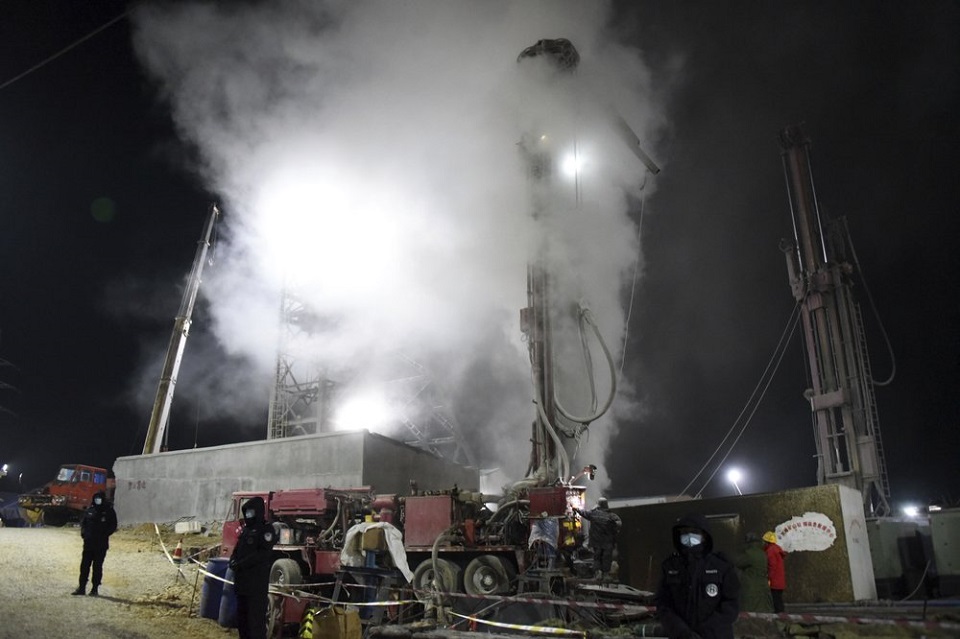 In this photo released by China's Xinhua News Agency, rescuers drill a new channel at the explosion site of a gold mine in Qixia City, east China's Shandong Province, Monday, Jan. 18, 2021. Chinese state media say 12 out of 22 workers trapped for a week by an explosion in the gold mine are alive, as hundreds of rescuers seek to bring them to safety. (Wang Kai/Xinhua via AP)

BEIJING, Jan 18: Chinese state media say 12 out of 22 workers trapped for a week by an explosion in a gold mine are alive, as hundreds of rescuers seek to bring them to safety.

The Xinhua News Agency said Monday a note passed through a rescue shaft Sunday night reported the fate of the other 10 remains unknown.

The handwritten note said four of the workers were injured and that the condition of others was deteriorating because of a lack of fresh air and an influx of water.

Managers of the operation were detained after they failed to report the accident for more than a day. The mine in Qixia, a jurisdiction under the city of Yantai in Shandong province, had been under construction at the time of the blast, which occurred Jan. 10.

More than 300 workers are seeking to clear obstructions while drilling a new shaft to reach the chambers where the workers were trapped and expel dangerous fumes.

“Keep on with the rescue efforts. We have hope, thank you,” read the note, written in pencil on notebook paper and posted on Xinhua’s official website.

China’s mining industry has a reputation for skirting safety requirements amid massive demand for coal and precious minerals, although increased supervision has reduced the frequency of accidents that used to claim an average of 5,000 miners per year.

100 Days: Tokyo Olympics marked by footnotes and asterisks
23 minutes ago
Biden set to withdraw U.S. troops from Afghanistan by Sept. 11
1 hour ago