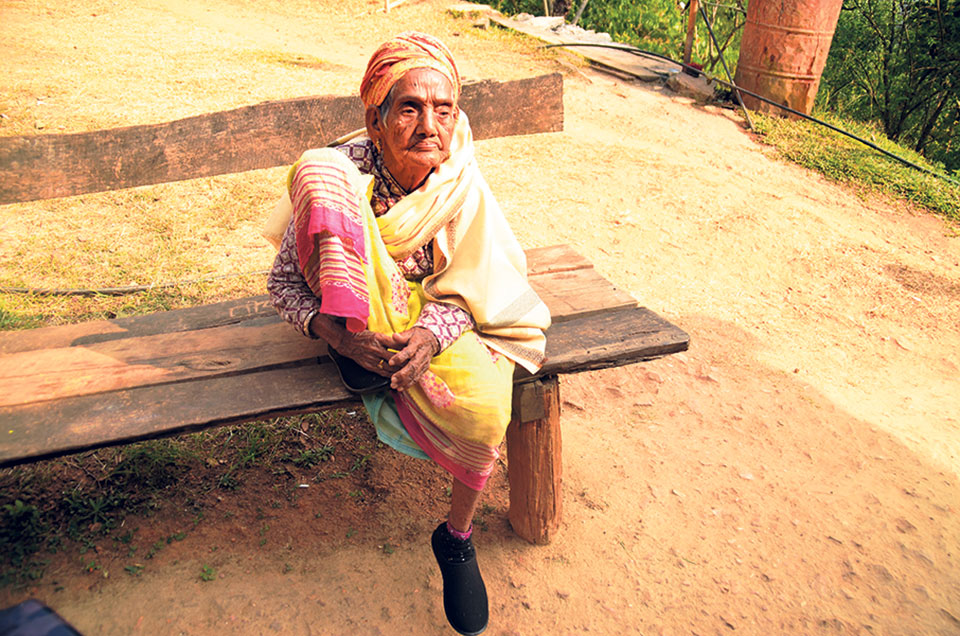 Bhagawati Devi Bhandari, 101, of Panchthar district is set to be the first citizen to receive the newly launched national identity card. Based on her seniority, Federal Home Minister Ram Bahadur Thapa is scheduled to start the card distribution program from her in Fidim on Monday. Photo: Giriraj Banskota/Republica

PANCHTHAR, Nov 19: Bhagawati Devi Bhandari, 101, looked very happy while basking in the sun on Sunday afternoon. She is expecting to get her national identity card on Monday.

“I do not know much about the card, but I have heard that a  huge function is being held in Fidim for distributing it. I think it is something really great,” she said. “They said that the government is providing it. A minister is said to start the distribution by handing over the card to me first. I cannot hear properly, I’ve become old. My grandchildren will tell me what I should do.”

The much talked about national identity card is being distributed from Monday. And it will kick off from the district headquarters of Panchthar, Fidim. According to the Director of National Identity Card Management Center, Komendra Neupane, Bhandari will be handed over the card first on the basis of seniority. This will make Bhandari the first citizen to receive the national identity card. She had filled a form for the card in June.

“I went to Fidim some months back in a bus. Now, they are going to give me the card. Maybe that will be good for my family,” said the elderly. “I do not know how old I am but they have written my age in citizenship card.”

Bhandari was six when she was married and arrived at her husband’s house. Her citizenship was made through her husband’s identity and official records says she is 101 now.

On Monday, Federal Home Minister Ram Bahadur Thapa is scheduled to hand over the card to her amid a formal program in Fidim, Neupane informed. He said that the distribution function will be grand and added that citizens’ details were being collected since June for issuing the cards.

“So far, 52,000 people have applied for the national identity card through their ward offices. Cards are being printed,” he said. “Tomorrow it will be a kind of celebration as it is a historical event.  And we are glad that it is being kicked off from Panchthar district.”

In the first phase, 110,000 people of Panchthar and 7,000 officials of Singha Darbar including VIPs are scheduled to receive the card. As per the government’s decision, the first distribution event will take place in Panchthar only.

“Though the cards have been readied for 7000 government officials, the plan to provide them first was dropped in favor of providing the cards to the citizens first,” Neupane said.

Fidim has been fully decorated for the event with huge paintings, banners and colorful arts from a range of communities are on full display in the town.

“Ministers and lawmakers for participating in the event will arrive on Monday morning. We expect it to be a grand event,” he said.

Chief Minister of Province 1, Sherdhan Rai and Minister for Finance and Planning Indra Bahadur Angbo, among others, will be present at the event along with home minister Thapa.

CDO of Panchthar Prakash Chandra Adhikari stated that the card will be distributed in 15 other districts in the second phase.

“We have to welcome the implementation of the national identity card; it is for developing a better system that would benefit all of us,” he noted.

It has been assumed that the card with a smart chip will help curb crimes as well. Citizenship card currently in use has been found vulnerable to duplication and forgery.  The national identity card is expected to prevent this kind of practices, according to Adhikari.

NAWALPUR, Dec 11: Nearly 200,000 people have filled the form for national identity card, In Nawalparasi (east of Bardaghat-Susta). The... Read More...