The story of World Cup 2018 cannot be told without mentioning Croatian president Kolinda Grabar-Kitarovic — the lady who lost the World Cup, but won the hearts of the world. Kolinda Grabar-Kitarovic is a unique character, with so much power; she still flew economy, stood in the rain— without an umbrella and hugged the heart-broken players showering them with love. But you know what? There’s more to this amazing president. Keep reading to get to know her better and find out what makes her amazing as a president and a human!

1. She is the first female president of Croatia

Though president Kolinda Grabar-Kitarovic had served her country in many high-ranking positions including; a politician, a diplomat and an assistant Secretary General for Public Diplomacy at NATO, being first female president is an exceptional achievement.

She won the presidency in 2015 after beating the incumbent narrowly to clutch the elusive presidential title. She has since changed the history of the country and put her name in record books as the woman who rose among the ranks— not by any affirmative action, but by fighting it tooth and nail to win presidency; a men-dominated political arena.

Immediately she won, the world knew she was no ‘small fish’ to be tossed aside when it came to international affairs. Her most publicized quote instantly after winning the presidency was; “I will not let anyone tell me that Croatia will not be prosperous and wealthy,” as publicized by BBC. She won the election narrowly securing a 50.5 percent against her opponent, Ivo Josipovic who obtained 49.5%. Though many people might count this as pure luck; it was a harvest of trust she had earned from the Croatians who knew her as a charismatic and development-oriented leader.

After all, BBC reported that most Croatians were confident that she would restore and improve the state of their nation after Ivo Josipovic, the incumbent she defeated had failed to end the six-year recession. 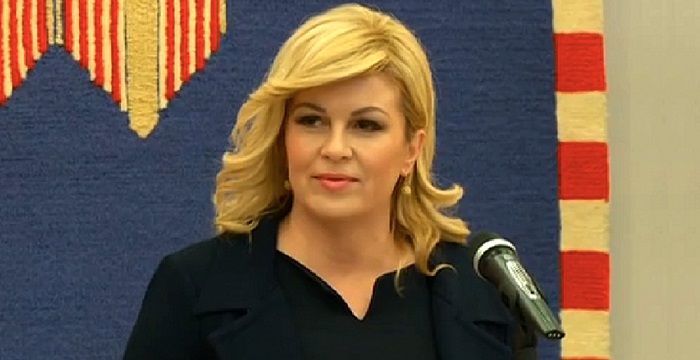 2. She is the youngest president in Croatia

Kolinda Grabar-Kitarović is not only the first Croatia lady president but is also the youngest person ever to become president in Croatia. In 2015 when she beat the incumbent, Kolinda Grabar-Kitarović age was only 46 years old— no other Croatian, male or female, had achieved such a political milestone at her age. She, however, did not win because she was young, but because she had worked a lot for her country at different levels, representing her country in policy making and bilateral negotiations and had thus won the admiration of the Croatian population.

3. Kolinda Grabar-Kitarović is one of the most powerful women in the world

In the article, Forbes praised her efforts to make Croatia a better place; “The youngest president ever of Croatia as well as the first woman to be elected to the office, Grabar-Kitarovic has continued to make a name for herself on the international stage this year working with President Donald Trump and the U.S. to build an American liquefied natural gas import facility on Croatia's Krk Island in the Mediterranean, which would deliver up to 2 billion cubic meters of gas a year to be distributed to Western Europe and nearby Baltic nations, which should help ease Europe's energy dependence on Russia. A former minister of foreign affairs and ambassador to the U.S., she last year visited Iranian President Hassan Rouhani to talk about strengthening diplomatic relations.”- Forbes

If you only knew her as Kolinda Grabar-Kitarović bikini wearing president, then these accolades are for you to know her better— as an achiever, opinion shaper, and a world-renowned change-maker.

4. She is an epitome of humility

The world cup showed it all, while Kenyan Members of Parliament chose to fly business class to watch the world cup costing Kenya millions of shillings, the Croatian president flew economy to the same world cup in Russia! See, She is one of the most humble leaders you will ever encounter on the face of the earth.

But this isn’t enough, she also purposely evaded the VIP luxury suite and chose to watch the matches from the stands with the crowd. She showed support for the players, standing in the rain to give them an embrace after losing to France in the World Cup finals.

5. She prefers equality to feminism

Most women leaders prefer to be called feminists because they only want to champion for the welfare of women. The feminism has attracted negative criticism from men as it could be discriminatory. President Kolinda Grabar-Kitarović says that she is not a feminist, but fights for equality for all men and women.

In a century when becoming a feminist is considered the right thing to do, and also ‘cool’ publicly stating that she is a woman leader who is not a feminist might have placed her at loggerheads with most female leaders, but she did it!

Jakov Kitarović is the first male to take the position of the first spouse, replacing the former first spouse Tatjana Josipović. He is a well-educated man who graduated with an Electrical Engineering and Computing degree from the University of Zagreb but continued to acquire a nautical degree from the University of Rjeka. He works as the Corporate Security Adviser for the AD Plasika, a company that specializes in the manufacturing of plastic parts for the automotive industry. Before joining the company, Jakov Kitarović had worked for Reversing Labs as an IT Consultant.

The president’s love for sports didn’t begin with president Croatia football; she says that she played football as a young girl. And the fact that her 17-year-old daughter Katarina is figure skating national champion demonstrates how supportive she is of sporting careers. Her other child is named, Luka. The couple has been together since 1996.

Though Kolinda Grabar-Kitarovic is a staunch Catholic and a conservative politician, she respects the right of women to abortion. While this is a controversial stand for any Catholic in a leadership position, President Kolinda Grabar-Kitarovic is non-conflictual in her leadership routines and wants to run an all-inclusive government where rights are respected. She opined that prohibition of abortion would not be the solution to anything, she mentioned her support for women to be allowed to have abortions legally and safely.

8. She would support her son if he were gay

Do you know any mother who would openly support her children if they were gay? Well, it becomes even harder to find a conservative national leader who can publicly declare support for a child of such a sexual orientation.

However, the Croatian president is different, in her inaugural speech she publicly proclaimed that she could support her son if he were gay. Though President Kolinda Grabar-Kitarovic has never declared her support for same-sex marriages, The Life Partnership Act gives same-sex couples the same rights as heterosexual spouses. How she has remained so conservative, yet very open-minded is what baffles many people who have since expressed their love for her policies.

9. She is an intelligent academician

President Kolinda Grabar-Kitarovic is well-educated and has studied in some of the best institutions in the world. To begin with, she has a master’s degree from the University of Zagreb, Faculty of Political Science, where she studied International Relations.

While in high school, she was a top-performer who represented her school in exchange programs, through one of the exchange programs she studied for a year at Los Alamos High in New Mexico. She was an intelligent student who grew in the academic circles to become a Fulbright Scholar who has received Luksic Fellowship for Kennedy School of Government at Harvard University. Her other achievements in the academic spheres include being a visiting scholar at Johns Hopkins University for Advanced International Studies.

The world has many languages, but you mostly need to know a few dominant ones. In fact, most leaders know only one language as they are sure to get the services of top-notch translators, but the Croatia’s president is different; she can speak over five languages.

She is fluent in Croatian, English, Spanish, and Portuguese. As if these are not enough, she also has basic knowledge of French, Italian, and German. Now, before reading all this, you may have seen kolinda grabar-kitarović bikini photos flooding social media, or her smiling face while cheering for her country's team in the stands; and you may have wondered who is that stunning lady, but now you know there is more to her than her hourglass figure and both her simplicity and humility, makes the Croatia’s president an outstanding world leader— and we can not get enough. She is a fighter for human rights, an environment activist, and a lover of sports.

A rare combination of demure and dauntless personality, Sahara Basnet witnessed a turning point in her life after winning the... Read More...

Amar Neupane is one of Nepal’s prominent writers. Originally from Chitwan, Neupane started writing at the early age of 10.... Read More...