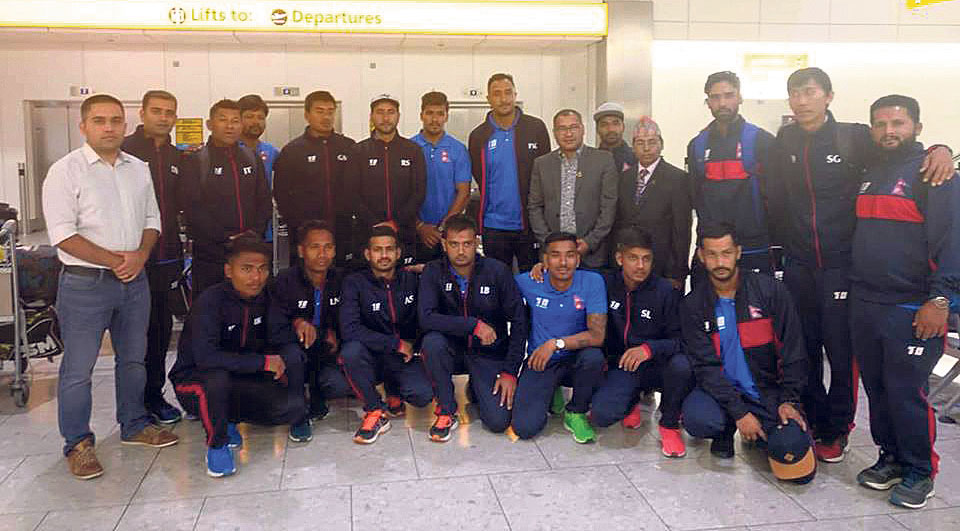 Members of Nepal national cricket team pose for a group photo upon arriving at the Heathrow International Airport in London, England on Thursday. Photo: Republica

A 50-over match will mark Nepal’s first ever One-Day International (ODI) match against the Netherlands on August 1. The second ODI of the two-match series will be held on August 3.

However, before that, Nepal will participate in a tri-series on July 29 hosted by world’s oldest cricket club Marylebone Cricket Club (MCC) at the Lord’s Cricket Ground, London. Also known as the ‘Home of Cricket’, the Netherlands will be the third team when all three round-robin matches will be played on the same day. Sri Lankan superstar Mahela Jayawardene will captain the MCC side.

A volunteer group in the United Kingdom led by Prashant Kunwar, Binod Bikash Simkhada and Siddharth Bikram Chhetri is working to get as many fans as possible at the Lord’s on July 29.

The match between Nepal and the Netherlands will be a T20 international; Nepal’s first in a while, providing more reasons for the spectators to look forward for the marquee single-day event before the one-day series begins in Amstelveen, Netherlands.

“We are also in touch with Nepali cricket fans from Germany and Belgium. We are inviting them as well for July 29,” Simkhada told Republica. “We also hope that fans from the United States and various parts of Europe will come.”

The group is taking care of ticket sales and marketing of the marquee event. Simkhada added: “We are targeting 10,000 fans for the event. We are confident of getting seven to eight thousand fans but are trying hard to increase that number. The signs are positive. Hopefully, we will see a historic number of fans to turn out that day to stun the cricket world.”

The campaign to get fans at the home of cricket is supported by the Nepali Embassy in the UK and other organizations such as the NRN UK, Tamu Dhee UK, Magar Samaj UK, and Nursing Association UK.

Fans have been one of the key driving forces for Nepali cricket team’s success. A hefty fan following back home and on social media while touring overseas has been hallmark of Nepal’s sports, especially cricket, in recent times. Ten thousand fans embarking the tri-series at the Lord’s is expected to excite the mainstream cricket world.

The Nepal national cricket team is set to play further practice matches against St Cross, East London XI and East London Sharks on July 23, 25 and 26 respectively before the tri-series on July 29.

Nepal had announced the squad for the T20Is in London and the ODIs in the Netherlands.