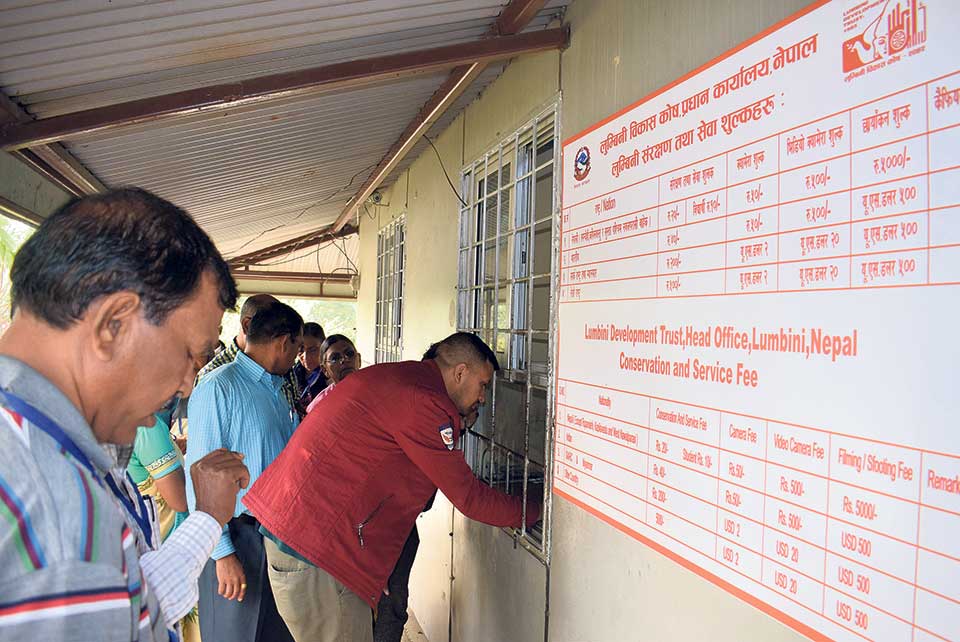 BHAIRAHAWA, Nov 20: More than 1 million tourists have visited Lumbini in the first 10 months of 2018.

"Our records show that until October end this year, around 1.1 million tourists have visited Mayadevi Temple of Lumbini," said Hari Dhwaj Rai, information officer of Lumbini Development Trust. "Of them, 892,361 were domestic tourists while 132,182 were Indian nationals and 123,939 were from third countries."

Both domestic and foreign tourists have to pay a fee to enter the area. Earlier, the Trust had announced to charge Nepali citizens Rs 20 per person as Greater Lumbini Conservation and Service Fee.

In order to expand its revenue sources, the Trust in August had started collecting entrance fee from Nepali nationals, who were earlier exempt from any fee.

However, locals from Rupandehi, Kapilvastu and western parts of Nawalparasi are not obliged to pay conservation fee to visit Lumbini area.

Entrance tickets are available at counters placed near the bus park and main entrance of Mayadevi Temple.

The Greater Lumbini Area covers an area of 5260 square kilometers, including Rupandehi, Nawalparasi and Kapilvastu districts in the southern plains of western Nepal. It includes various sites of religious and archeological importance such as Lumbini, Kapilvastu, Kudan, Gotihawa, Niglihawa, Araurakot, Sagarhawa, Devdaha and Ramagrama. The government is spending Rs 700 million in projects being run under the Lumbini Master Plan.