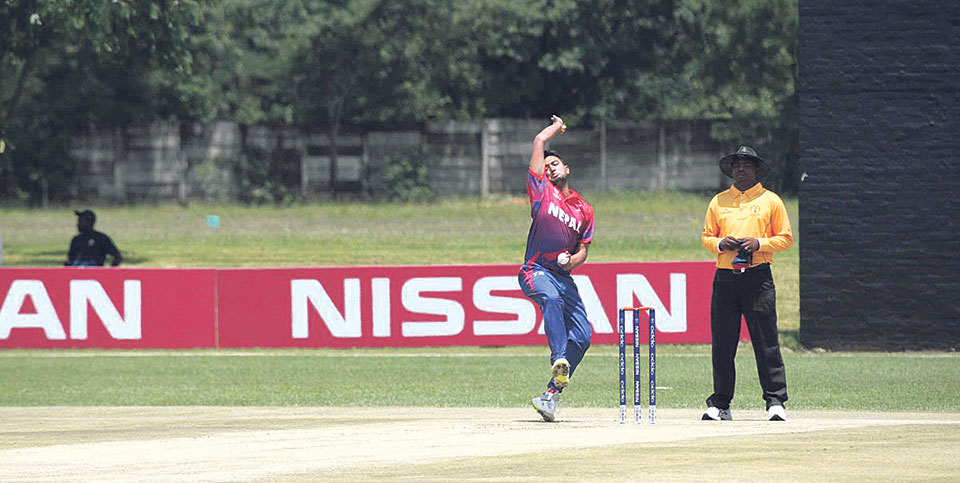 KATHMANDU, Feb 28: A 46-run partnership between Aarif Sheikh and Sharad Vesawkar sealed a five-wicket win for Nepal in its first warm-up match against the United Arab Emirates (UAE) ahead of ICC World Cup Qualifiers in the Kwekwe Cricket Ground, Zimbabwe on Tuesday.

In a match delayed due to wet-outfield, the total overs were reduced to 29 per side. Sheikh scored 23 off 15 unbeaten in a partnership of 46 with Vesawkar who remained not out on 41 playing a sheet anchor role at the other end to chase down a target of 172 runs in 28.2 overs. Sheikh smashed two boundaries and a six in his innings. Lalit Bhandari starred with the ball picking four wickets supported by Karan KC’s three wickets in the last over of the UAE innings to bundle out them for 171.

Defending the target of 172 runs, Amir Hayat gave the UAE a good start dismissing both the Nepal openers cheaply in his opening spell. Gyanendra Malla hit three boundaries in first over after the fall of the wicket of Dilip Nath who was adjudged LBW by Hayat. Nath scored a boundary in first ball before losing his wicket in next delivery. Malla was dismissed for 12 runs in 12 deliveries. Nepal further slid into trouble after losing the wicket of Anil Sah who batted at number four ahead of Dipendra Singh Airee.  Sah made 11 runs from 16 before getting clean-bowled by veteran UAE pace bowler Mohammad Naveed.

Skipper Paras Khadka then shared a partnership of 30 runs with new batsman Sharad Vesawkar to take Nepal’s total to 69 runs at the end of 15th over. Khadka was dismissed by his counterpart Mustafa for 28 runs in 39 deliveries. He scored a boundary. Airee, the U-19 captain of Nepal, then made a quick-fire 41 runs off 32 deliveries including four boundaries and a six to put Nepal in a good position of 126 runs for the loss of four wickets at the end of 23rd over. However, Nepal lost the wicket of Airee at the same score ending the strong partnership of 57 runs with Vesawkar. Aarif Sheikh then joined Vesawkar at the crease to ensure Nepal’s five-wicket win.

Earlier, the UAE posted a total of 171 runs in 28.5 overs losing last five wickets for six runs in last two overs. Lalit Bhandari picked up two wickets in the penultimate over dismissing Muhammad Usman and Mohammad Boota. Usman looked in good knick scoring a boundary and a six in his 26 runs cameo facing 20 deliveries. Boota, dismissed for one run, was clean-bowled by Bhandari. Similarly, in last over of the innings, Karan KC, who was wicket-less in his first five overs, picked three wickets to wrap up UAE for 171 runs. KC dismissed Adnan Mufti who was batting well on 37 runs from 26 deliveries including four boundaries. The Nepali pace bowler further scalped the wickets of Chirag Suri and Mohammad Naveed for one run each to close the UAE innings.

The UAE opening batsman Ashfaq Ahmed top scored with 42 runs before losing his wicket to debutant Lalit Rajbanshi. The Nepali left arm spinner was included in the squad for qualifiers for the first time. Ashfaq, who had scored a century against Nepal in ICC World Cricket League Division Two playoff final, scored four boundaries and a six facing 51 deliveries at crease. Rajbanshi removed Shaiman Anwar for 16 runs to finish with two wickets in the match. Anwar scored two fours in his 19 deliveries. Similarly, wicket-keeper batsman Ghulam Shabber chipped in 32 runs in 38 deliveries including a four. The UAE skipper Rohan Mustafa was dismissed for four runs by Lalit Bhandari who finished with four wickets in the match.

Nepali national team is in Zimbabwe to participate in the ICC Cricket World Cup Qualifiers which will take place from March 4 to 25. Nepal is seeded in group B with host team Zimbabwe, Afghanistan, Hong Kong and Scotland.

Nepal will play Hong Kong in next warm-up match on Thursday.

In his written response to SC, Dahal says courts can never be influenced by rallies, slogans and speeches
38 minutes ago