You are a nationalist too 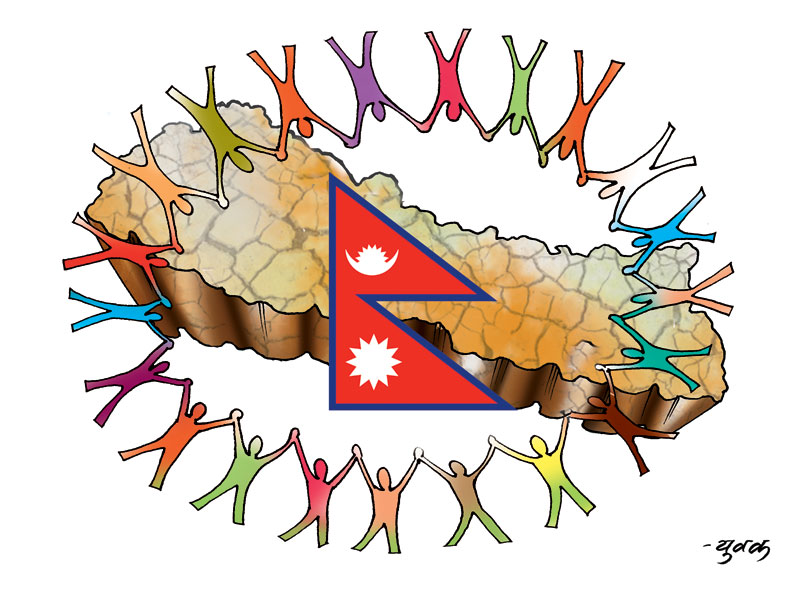 The author of Imagined Communities, Benedict Anderson has rightly said that nation, nationality and nationalism are “notoriously difficult to define”. Traditional benchmarks of these ideas have been questioned since the nineteenth century. French historian Ernest Renan declared as early as 1882 that “man is a slave neither of his race, nor of his language nor his religion nor the course of rivers nor the direction taken by mountain chains” and that “man creates a moral conscience which we call a nation”.

Yet we cannot think of a nation and nationalism without considering language, race and geography. Forgive my shortcoming in discussing this theoretically contested, emotion-laden and difficult idea of nationalism in relation to Nepal in the following paragraphs.

Paush (December-January) is the best time to reflect on Nepali nationalism and the characters that shaped this imagination. Epochal happenings in the life of this nation have taken place in December. For one, the birthday of Nepal’s unifier, Prithvi Narayan Shah, whose legacy is today’s Nepal, falls on Paush 27. These days his national unification is debated including whether he should be regarded as the founding father.

The Sugauli Treaty, which dealt Nepal with what Ludwig F Stiller calls the “trauma of defeat”, was proposed on December 2, 1815, with a 15-day ultimatum to Kathmandu Durbar for ratification. Nepal was compelled to ratify it in March 1816, when British troops had come to invade Makawanpur, a neighboring district of Kathmandu. The Nepal-Britain treaty, which gave Nepal the status of a sovereign nation for the first time, was ratified in December, 1923.

On December 15, 1960, King Mahendra took the reins in his hands. On December 30, 1976, BP Koirala returned to Nepal from Indian exile to effect ‘national reconciliation’ with all nationalist forces including the king. This has been described as his sincere attempt to save Nepali nationality and nationalism from possible Indian aggression. Commemoration of these events generates national imagination.

But since the 2007 political change, the role of the characters who shaped the destiny

of Nepal have been heavily disputed. Worse, after India’s flagrant intervention in Nepal’s constitution process and the economic blockade, nationalism has been made to appear like a flawed strategy.

It would not be wrong to say that Nepali nationalism was systematically promoted through history and social studies text books after king Mahendra overhauled the education system through his ambitious National Education System Plan (1971). Students were (still are) taught about the nation’s past and its struggle. The history of the bravery of Nepali warriors who fought during unification and Anglo-Nepal war (1814-1816) was highlighted. The stories of loss and suffering were conveniently shelved. Nepali historian Pratyoush Onta has written extensively about the bravery theme and other shades of Nepali nationalism.

But this is how national imagination is disseminated in India and the US as well.

To instill a sense of nationalism, students are taught about the pre-colonial Indian glory. The subjects include how India suffered centuries of colonial rule and how freedom fighters like Bhagat Singh, Mahatma Gandhi, Dr Amebdkar and Lal Bahadur Sastri fought to free the country from the British rule. The entertainment industry reinforces the historical wrong of colonization by demonizing firangis through the movies.

Colonial past, the struggle for interdependence, role of civil rights heroes and idea of American democracy as the best system in the world form the cores of America’s history and social studies text books. Americans pride themselves on how their ancestors fought to save America in different phases of history.

At the core of every national narrative is the idea that one’s country, however small or poor, has a unique history and identity, and is equal to any other country in the world. This is why nationalism tends to be ugra (radical) and at times khokro (hollow). Nation defines its unique existence in terms of difference with other nations, more so if that particular nation has had a history of wars with those nations.

In that respect, what is strange of Nepali nationalism is its tacit opposition to modern India on which Nepal is dependent for virtually everything. This should not have been.

Worldwide, feelings of nationalism are most intense in newer nations, especially those with colonial pasts. Nepal, as an old nation state, is an exception to this rule.

The only Great War that Nepal fought in was with colonial Britain, the then enemy of India. Enemies of enemies become friends, as the saying goes. But Nepali nationalism has some anti-Indianness, which is primarily the result of India’s reluctance to view Nepal as a sovereign state. Think of the blockades of 1969, 1990 and 2015, India’s micromanagement of our affairs, and encroachment and even occupation of Nepali territories like Susta and Kalapani. The only way a weak and vulnerable nation can assert itself against big-power aggression is by speaking out against it.

In Nepal, political parties which dare to speak against it are seen as nationalists. But they fail to take a firm and consistent stand on national interests. The biggest nationalists of one time turn out to be fickle nationalists in another time.

Shortly after constitution promulgation in September, 2015, the current Prime Minister Pushpa Kamal Dahal delivered an emotional speech by citing reference from Nepali poet laureate Madhav Prasad Ghimire’s lyric Nepali hami rahaunla kahan Nepalai narahe (“Where will we Nepalis be if there is no Nepal?”). He went on great length about how he along with other leaders had fought against India to bring the constitution. One year later, he has changed this tune.

No one knows how long CPN-UML will be able to maintain its stand on hill-plain interdependence in province creation, and stand against India’s seen and unseen influence peddling in constitution amendment.  But so long as it does, you can call it a nationalist force.

Dictators use nationalism as a tool to consolidate power and justify their need. They do so by raising perceived or real threat of external attack. But the kind of nationalism Nepal is trying to assert at this moment is against the forces undermining its sovereign status.

The creed called “nationalism must be ended,” says American sociologist Amita Etzoni, in the essay On Ending Nationalism because it has burdened “the expansion of globalism”, complicated “resolution of differences existing among nation states” and “hindered progress”.  He suggests returning to the pre-nationalistic world order of “community of communities.”

But can you forget or undermine your national narratives? Or can you afford to have a distorted version of this narrative passed on to future generations? Try this.

Nepal has never been a sovereign country. This came to exist because of blessings of colonial rulers in the south. Prithvi Narayan Shah was not worried about possible invasion from the Britishers in the south. All that whimsical blood-thirsty warrior wanted was to become the king of a large territory. What we call unification is the product of his desire to rule.

He made a big mistake by unifying Nepal. Nepal was better off with pre-nationalistic order. As for the Sugauli Treaty, that was the best reward for Nepal’s audacity for expansion.

Nepal should have remained under India after 1947 for it was a part of India anyway. King Mahendra made a big mistake by sending back Indian troops from Nepal. Since Nepal has cultural, economic and religious ties with India, it should bear with some form of Indian intervention in its political affairs. The territorial entity called Nepal was born out of fate.

However great nihilist or deconstructionist you may be, you won’t accept this version because it is against your values and beliefs. Fellow Nepalis, so long as you consider yourself citizens of this nation, and Nepal your home, and so long as you believe that your ancestors sacrificed to bequeath a nation you call home, and you also believe in its sovereignty and reject the above narrative, I am sorry, you are as nationalist as I am. As Lord Byron said long ago, “He who loves not his country, can love nothing”.