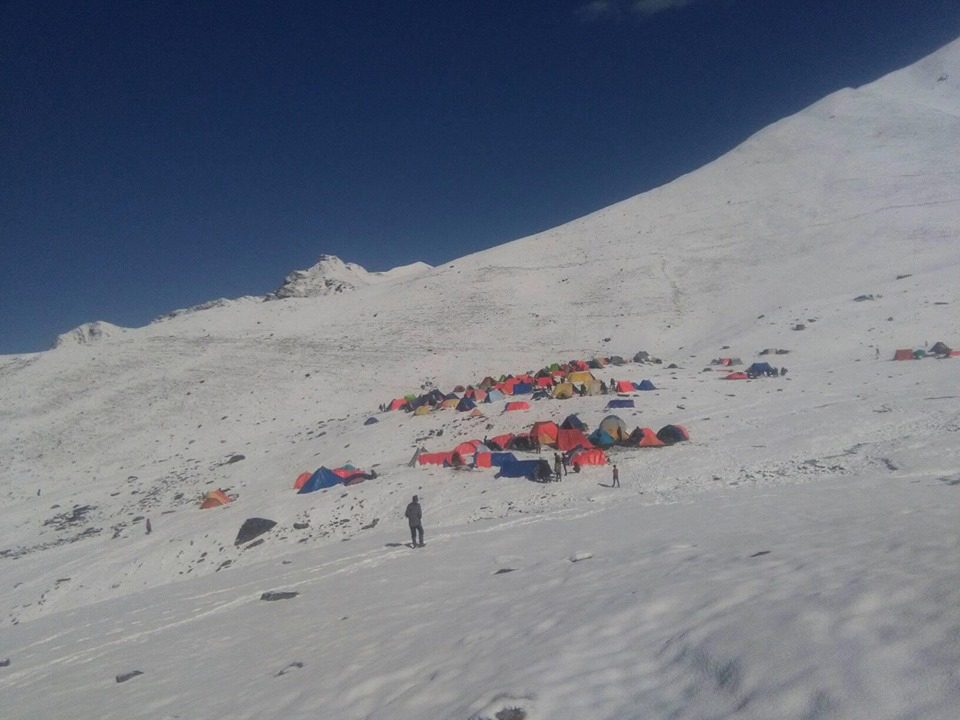 RUKUM, June 11: There are many highlands in Rukum (West) where people do not really have to seek permission from any authority to pick Yarsa, a prized medicinal fungus. However, various committees are exercising monopoly by charging entry fees and taxing the Yarsa pickers.

People reaching some highlands for picking Yarsa are obliged to accept the syndicate imposed by these committees which have been formed in the highlands where there is no government presence. Many highlands of Putha Uttarganga Rural Municipality-1 and 2 were officially opened on Friday for Yarsa picking. However, the Yarsa pickers reached there a month ago. So as to give security to the valuable herb, at least two members of each family (local) live in the highlands during the season. So, the people who reached Rukum (West) from the neighboring districts to pick Yarsa have accused the authorities of opening the highlands for Yarsa picking only after the locals finished picking the medicinal herb.

"In the name of security, locals reach the highlands and collect Yarsa," said Naresh Gharti of Jajarkot who recently reached Rukum with the hope of gathering some Yarsa. He added, "They collect enough for them and then open it for others." Gharti who has been visiting Rukum for the past four years says no one has to actually take permission from any authority to enter the highlands.

But various committees have been imposing their rules for years. "Every year, the committees collect millions of rupees from the locals and businessmen in the name of various charges but no one knows where that money is spent," said local Surendra Budha. The committees, however, claim that the money collected from the Yarsa pickers is invested in development projects. Amardhan Pun Magar, chairperson of one of such committees, claims that the money is used especially to pay salaries to private teachers and to build infrastructures at schools.

According to him, Rs 1,500 has been fixed as the entry charge per person for the common people and Rs 18,000 for businesspersons. With the objective of curbing the smuggling of Yarsa, this year the committee has decided to give permission only to the locals. "To curb the smuggling, we have given permission to locals only this year. We hope this decision will be fruitful," said Magar.

Bed Prasad Bhandari, assistant forest officer at the Division Forest Office (DFO), Rukumkot, said some of the decisions made by the committee are against the Forest Act and other laws. He stated that the decision to prohibit the people from other districts to enter the highlands is wrong and is against the international business practice.

Meanwhile, he added that before heading for the highlands, Yarsa collectors must pay the tax and take receipt from the DFO as the herb is found in the forests. According to him, so far DFO has given permission to collect 2 kg and 500 gram of Yarsa. The DFO has fixed Rs 30,000 tax for per kg Yarsa.The highlands of Putha such as Pupal, Arbija, Jungala, Purbang, Bhitriban, Ungla, Panidhal, Sundaha among others are occupied during the Yarsa-picking season.

Caption: Tents built by the locals of Putha Uttarganga in the highlands for protecting Yarsa.

Eight Yarsa pickers have died in Dolpa this season so far

DOLPA, June 7: A week after the reported deaths of five Yarsa pickers in the highlands of Dolpa, three more people... Read More...

DOLPA, June 2: Three people who had gone to various highlands of Dolpa to collect Yarsa have died in the last... Read More...