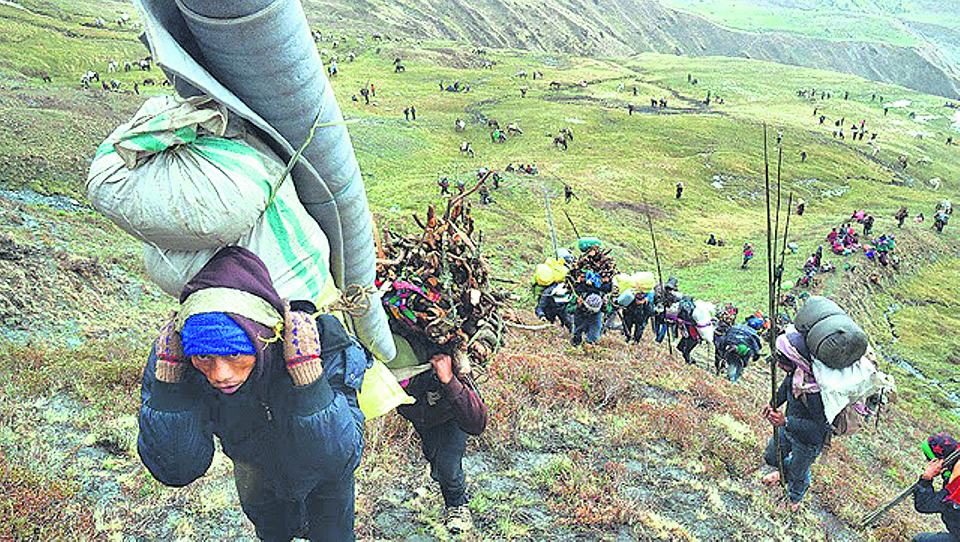 Yarsagumba collectors on their way to highland pasture for collecting the fungus in Lamjung, in this recent picture.

LAMJUNG, May 14: Some high altitude pasture lands of Manang look colorful these days. Yarshagumba collectors are busy in collecting more and more of the caterpillar fungus. More the collection, more the reward; everyone seems excited. Be it man, woman or child, and they look competing with all their might to make their trip profitable. This spectacular scene is an annual feast for visitors’ eyes.

Like every year, this year also the management committee permitted collectors to collect yarsa from the second week of the month of Baishak (mid-May).

Yarshagumba is found in several mountain districts of the country including Dolpa, Darchula, Mugu and Bajhang. People from several districts and even from bordering villages of India come for collecting yarsagumba, which sells for an excellent price.

According to Babulal Tiruwa, the chief of Annapurna Conservation Area Project (ACAP), the rush for collecting yarsa is very remarkable this year also. People have reached here from many districts including Gorkha, Dhading, Lamgunj and Nuwakot.

“Like in the past, the collectors have come carrying all the essential things that they need during their stay in the highlands. It’s an exciting as well as a tough and risky trip,” he said.

Tiruwa said that this time the collectors might have a better harvest of yarsagumba. Unlike previous years, the high mountains received a good amount of rain and snowfall around the year, and this might have spurred its growth.

“April to July is considered a good time for collecting yarsa. And this year, as there has been plenty of rain and snowfall in the highlands, environment for the growth of the fungus has been more conducive. As such the collectors might have a better harvest this year,” Tiruwa noted.

Last year, authorities in Bajhang district had imposed a temporary ban on its collection. Stating that the fungus is just sprouting and the land should be protected from visitors for sometimes, permission was not granted for yarsa collection in the area.

Similarly, authorities had put a hold on yarsa collection in several foothills of Bajura district citing the same reason. In some other areas, it was feared that the fungus-plant was fast disappearing and temporary bands were introduced.

“It is true that we have not been able to handle things well. Collecting yarsa for several reasons is important. At the same time, it needs conservation as well. Or else, it dies or disappears,” noted Tiruwa. “When too many people try to collect it from the same area or when it is collected before time, its natural growth gets affected.”

However, the weather has been favorable for its growth this time and collectors may not have to struggle very much to find it, Tiruwa assumed. Megh Bahadur Baraili, a trader who has submitted a bid for buying yarsa from the collectors, discussed the risks involved in the business. Apart from accidents and even deliberate attack on yarsa collectors on the way, there are dangers of theft or robbery of the picked yarsagumba.

“A decade ago seven yarsa collectors from Kerauja of Gorkha were murdered at Naar of Manang. Consequently, authorities had imposed a ban on yarsa collection in certain areas,” he reminisced. “Despite some improvement in security management, risks are still there. People also rob it from each other,” he added.

Baraili stated the rush for yarsa collection remains very competitive every year. “Even this year, it’s a risky journey with fierce competition.”

Traders fix the price of yarsa and pick it from those collectors after reaching a deal with them. Bargaining comes to a particular settlement, and yarsagumba is purchased from those fixed collectors only, he said. “Not everyone fixes the same rate. Moreover, it depends on the health of yarsagumba. If it is not cleaned properly, we don’t offer better prices,” he said.

Generally, traders prefer to deal with the same groups, so that the quality of yarsagumba is somewhat guaranteed. “Some are skilled in cleaning the fungus. Some others do not do it that well. It’s also a matter of huge luck for them, how many and how fast can they collect it,” he stated. Yarshagumba grows in highland pastures situated 4000 meters above the sea level in different districts. In low lands, the caterpillar fungus is rarely found. In Manang, yarsa is mostly found mainly in Kicholek, Ghumre, Pisang lek, Naple lek, Fuku lek and Yakakharka areas.

Shrawan Kumar BK, a police inspector at the District Police Office of Manang, said that security in the area has been beefed up in the view of yarsa trips. “More security personals have been deployed at every check posts. We have restricted carrying of weapons for the collectors. Similarly, alcohols or any narcotics have been banned from the collection area. They are not allowed to pass through the checkpoints,” he said.

Morang on top in terms of registered voters, Manang at bottom

KATHMANDU, April 3: The Election Commission has finalized the number of voters for the upcoming local level elections and said... Read More...