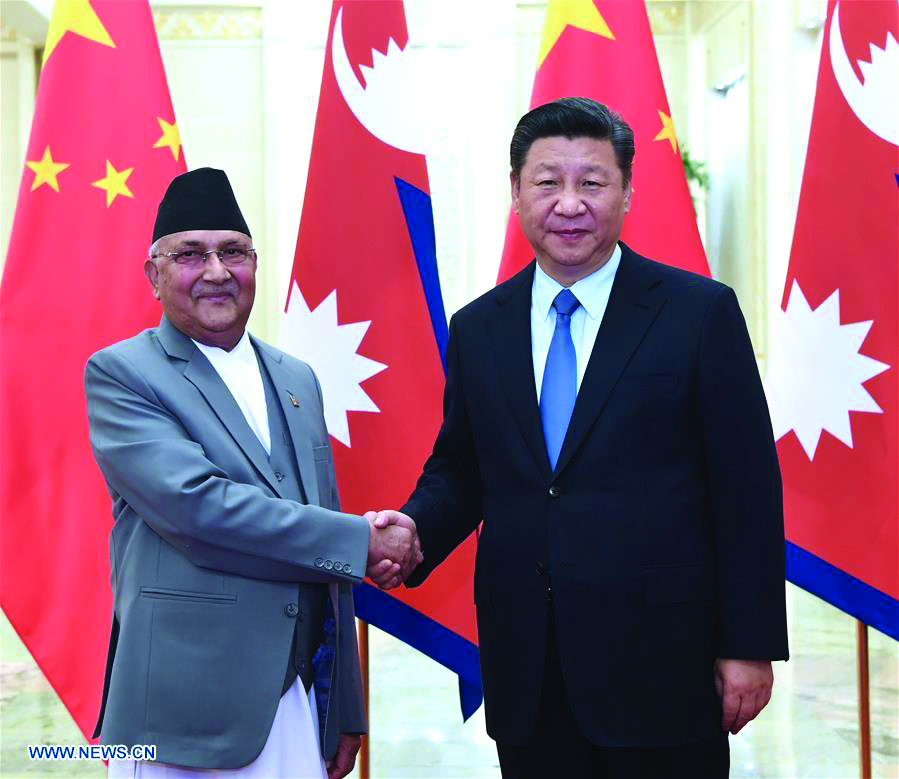 During a press conference in Beijing, Vice Minister of Chinese Foreign Ministry Luo Zhaohui said that Xi will be the first Chinese president to visit Nepal after an interval of 23 years.

The Chinese senior official's remarks come two days ahead of Chinese President Xi's visit to Nepal on October 12 and 13.

"Nepal, as a friendly neighbor, also serves as an important partner of China in terms of carrying out the Belt and Road cooperation," Luo said.

Since the establishment of diplomatic ties, the two countries have treated each other on an equal footing with mutual respect and support, said Luo, adding that China and Nepal have become a model of mutually beneficial cooperation between countries that are different in social system and size.

He said that Xi will attend the welcome ceremony and banquet hosted by President Bidya Devi Bhandari, meet with Bhandari, hold talks with Prime Minister K.P. Sharma Oli and jointly witness the signing of cooperation documents with him.

Chinese President Xi will also meet with co-chairman of the Nepal Communist Party Pushpa Kamal Dahal aka Prachanda, and leaders of the country's Federal Parliament and other political party leaders, Luo added.

"Leaders of the two countries will make new plans for the development of bilateral relations, ushering in a new era of fast development for China-Nepal relations," Luo said.

The visit will also consolidate political mutual trust and foundation of public opinions for friendship between the two countries, push forward high quality construction of the Belt and Road, speed up building an interconnectivity network across the Himalayas, and inject new impetus into pragmatic cooperation in various areas between the two countries, the vice foreign minister said.

Before coming to Nepal, Chinese President Xi will attend the second informal meeting with Indian Prime Minister Narendra Modi on October 11 and 12.

This will be Xi's first overseas trip after the celebration of the 70th anniversary of the founding of the People's Republic of China.

In Chennai, Xi will have an in-depth communication with Modi on issues that have overall, long-term and strategic significance on bilateral relations, Xinhua reported.

Since the first informal meeting between Xi and Modi in the central Chinese city of Wuhan last year, China-India relations have entered a new stage of steady growth, with cooperation and exchanges being carried out in various fields and differences being properly managed, the reported quoted Luo as saying.

China-India cooperation will not only benefit the development of the two countries, but also help promote world multipolarization and economic globalization, and safeguard the common interests of developing countries, Luo said.

(with inputs from various news agencies)

China to assist Nepal in transforming it from landlocked to land-linked : Chinese President

KATHMANDU, Oct 12: President Bidya Devi Bhandari has said that Nepal-China relation is deep as ocean and high as the... Read More...

KATHMANDU, Oct 12: President Xi Jinping of China was offered a guard of honor by a contingent of the Nepal... Read More...

Dead body found at ward office in Golfutar
7 hours ago