‘Writing is also a form of entrepreneurship’ 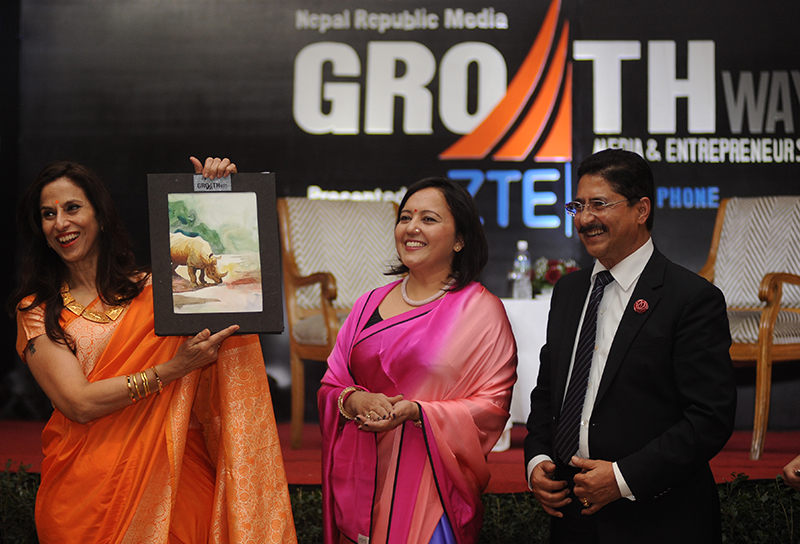 KATHMANDU, Nov 17: Mentors of entrepreneurs and authors talking on media and entrepreneurship at Growthways  convention held in Kathmandu Thursday highlighted the importance of the youth and the building of relationships with the media for building brand.

Entrepreneurs should look to create their own market by digging through facts and big data looking for points where they can cause digital disruption, they said. Authors said that writing was also a form of entrepreneurship.

Speaking at the ‘Media and Entrepreneurship Convention’ organized by Nepal Republic Media on Thursday, Anurag Batra, the chairman and editor-in-chief of Business World talked about his three rules entrepreneurs should follow while dealing with the media as well as three dos and don’ts for the same. Business World is an Indian business magazine and Batra also mentors many budding entrepreneurs.

Entrepreneurs, Batra said, should be authentic and create content that says who they are. They should be actively engaged with the social media and build a relationship with the media without expecting immediate results, he said. “Do not shy away from dealing with the media. But do not go unprepared and do not push them. And do not engage with multiple people from the same media house,” he said.

Batra suggested that the media discover new people in their stories as well as have the youth in the newsrooms.

Youth can bring changes to the digital economy and business leaders should provide them with high-speed internet access, Shripad Kulkarni, the managing director of Vizeum India “Dentsu Aegus Network”, said. The digital world and digital disruption, Kulkarni said, give people all the means and ways of doing business while the new generation can tap it to unlock its potential, and the media can build its business.

Renowned Indian columnist and novelist Shobhaa De said it was the authenticity of a product and not advertising that helped it become a brand. She said: “Be assets to others.” De was quite blunt on her views on the value of advertising. She said that advertising was bogus and dull as people were not going to buy a product no matter how much it was advertised. “Nepal has tremendous opportunity to do business with India,” De added.

Small things lead to big things, Sachin Garg, a bestselling Indian author and publisher, said. His creative writing career started with the 160-character SMS messages he sent to his girlfriend while at college, he said. This led to writing blogs, then to becoming a published author and finally to a publisher. Garg suggested that people follow their curiosity and find likeminded people to pursue their dreams as he had done, building a team with three other friends to establish Grapevine India Publishers. “Every author is an entrepreneur as I don’t see the difference between an author and an entrepreneur,” Garg added.

Gender bender, social entrepreneurship is at the heart of PadMan

KATHMANDU, Feb 10: By nature, Laxmi (Akshay Kumar) seems to be very innovative and creative. It is this quality that... Read More...

I write because writing is power!

I started writing the moment I fell in love with my first book. I was studying at grade 4 when... Read More...