World Cup 2018: The dos and don'ts of celebrating a goal 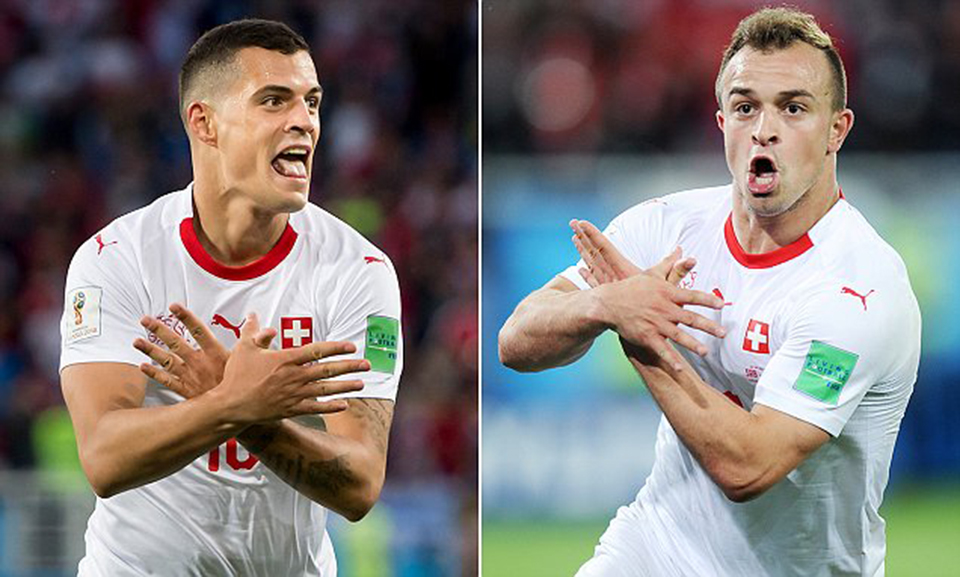 MOSCOW, July 1: Picture the scene: it is the dying moments of a World Cup match and the score is level. You receive the ball and take a speculative shot which sails straight past the goalkeeper and into the top corner. What do you do next?

Some might run to the touchline and celebrate with a dramatic knee slide. The more acrobatic players may opt for a somersault or a backflip.

But for others, the sheer joy of the moment can lead to some unconventional celebrations that draw the attention of the referee or, even more seriously, football's governing body Fifa.

This is what happened to Switzerland duo Granit Xhaka and Xherdan Shaqiri, who has been fined for their choice of celebration during a 2-1 victory over Serbia last week.

The families of both players are ethnic Albanians from the former Yugoslavia, where a Serbian crackdown on the Albanian population in Kosovo ended with Nato military intervention in 1999.

After scoring, they made a gesture representing the eagle on the Albanian flag which critics said could inflame tensions among Serbian nationalists and ethnic Albanians.

So what are the rules when it comes to celebrating a goal? And how should the authorities respond when a celebration goes too far?

While players are free to show national flags or symbols - Shaqiri himself displays the Swiss flag on one boot and the Kosovan flag on the other - there is a rule against "provoking the general public".

The governing body's disciplinary code makes clear that "anyone who provokes the general public during a match will be suspended for two matches and sanctioned with a minimum fine of £3,800".

Lawmaking body the International Football Association Board (Ifab) also states that a player must be given a yellow card for "gesturing or acting in a provocative, derisory or inflammatory way".

In the end, Xhaka and Shaqiri were ruled guilty only of "unsporting behaviour". As a result, they did not receive bans but fines of £7,632 each, while the team captain Stephan Lichtsteiner will pay a fine of £3,816.

While no player has ever been banned from the World Cup for provocation, club football has seen its fair share of political celebrations that have led to disciplinary action and a ticking off from the sport's higher-ups.

He lifted his shirt to reveal a T-shirt underneath that read "500 Liverpool dockers sacked since 1995". The player - who would go on to become one of Liverpool's top goal-scorers - was fined £900 for the celebration.

The laws of the game explicitly state that "players must not reveal undergarments that show political... statements or images".

More recently, French striker Nicolas Anelka was punished after celebrating a goal with the "quenelle" gesture - described as an inverted Nazi salute - while playing for West Bromwich Albion.

Anelka said he did it in support of the controversial French comedian Dieudonne M'bala M'bala, who popularised the gesture and has been accused of anti-Semitism.

The player was banned for five games and fined £80,000 by the Football Association (FA) before being sacked by the club.

Ultimately, political gestures are likely to land a player in hot water. But some of the creative celebrations at this year's World Cup have still managed to raise eyebrows while abiding by Fifa's rules.

The body states that "players can celebrate when a goal is scored, but the celebration must not be excessive". It adds that "choreographed celebrations are not encouraged and must not cause excessive time-wasting."

Despite this, players are rarely punished for choreographed celebrations. On Sunday, social media praised the Colombian team for showing off their celebratory dance routine during a 3-0 victory over Poland.

England midfielder Jesse Lingard also showed imagination in his celebration inspired by the computer game Fortnite after scoring against Panama on Sunday.

The player's "shoot dance" features as a taunt on the hugely popular game, which the England team are said to be big fans of.

Both of these celebrations abide by Fifa's rules, which state that a player must be cautioned for:

Gesturing or acting in a provocative, derisory or inflammatory way

Removing the shirt or covering the head with the shirt

So providing that jubilant players avoid these no-nos, they are free to express their joy however they see fit.

One theory that spread on social media following Portugal's 3-3 draw with Spain and England's win over Panama was that one player must stay on the pitch while the rest of the team is celebrating otherwise their opponents can kick-off.

It came after videos showing Portugal's Jose Fonte and England's Kieran Trippier remaining on the pitch during their teams celebrations were widely shared on Twitter.

But this is incorrect, as Fifa's rules make clear that "for every kick-off, all players, except the player taking the kick-off, must be in their own half of the field of play."

So players can rest easy knowing that - however they choose to celebrate - they can share the ecstasy of scoring with the rest of the team.