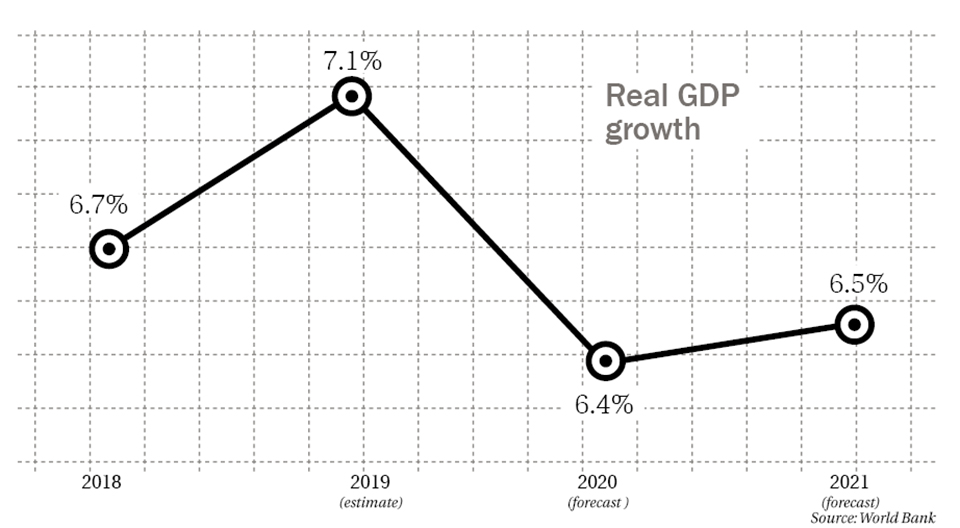 The medium-term outlook is supported by government consumption and investment, according to the bank. Reasoning strong services and construction activity due to rising tourist arrivals and higher public spending, the international financial institution made the growth projection for Nepal.

On the regional front, South Asia is projected to slow to 5.9% in 2019, down 1.1 percentage points from April 2019 estimates in line with a global downward trend, casting uncertainty about a rebound in the short term, according to the bank.

“Declining industrial production and imports, as well as tensions in the financial markets reveal a sharp economic slowdown in South Asia,” a statement issued by the World Bank on Sunday quoted Vice President for the South Asia Region Hartwig Schafer as saying.

Driven by private investment and consumption, the growth rate in the current fiscal year is estimated to have increased to 7.1%, marking three consecutive years of over 6% growth.

However, the World Bank’s projection is still lower than the government’s target to attain 8.5% growth rate in the current fiscal year. The macro poverty outlook indicator shows that the GDP growth at constant market prices for the year 2019 is estimated to be 7.1%, and forecast 6.4% for 2020 and 6.5% for 2021.

According to the report, growth on the supply side will be driven by services, underpinned by steady remittance inflows and high tourist arrivals whereas investment and government consumption are expected to be the main drivers of growth on the demand side. The tourist arrivals will be supported by the Visit Nepal 2020 campaign, the completion of the second international airport and the construction of big hotels in the country.

The report states that the public consumption will be supported by increased spending on salary and goods and services. In addition, efforts aimed at building capacity at the sub-national levels and the implementation of performance-based contracts at the central level will also result in higher overall public spending.

“The implementation of the 2019 national work plan to minimize the trade deficit along with investment related initiatives such as establishing a one-stop service center is expected to support private investment,” read the report.

However, increased import tariffs on selected agricultural products and consumer goods are expected to lower the growth of private consumption.

Inflation is expected to increase to 4.5% in the current fiscal year up from 4.2% in the last fiscal year with higher public sector wages, increases in import duties on agricultural and industrial goods, and the removal of value-added-tax exemptions on some intermediate goods and services, the report states. On the contrary, the regular supply of electricity at low cost and low inflation in India will offset some of the increase.

According to the report, remittance as a share of GDP is expected to stabilize at 25% over the medium term and the government spending is expected to increase to 29.7% of GDP by FY2021/22 due to salary increases, higher social security spending, and a pick-up in capital investments.

KATHMANDU, Feb 25: The government has signed an agreement for a second additional concessional loan financing of Rs 2.14 billion... Read More...

Does Doing Business ranking mean anything?

KATHMANDU, Nov 15: The government has signed two agreements with the World Bank to implement road and food security projects worth... Read More...