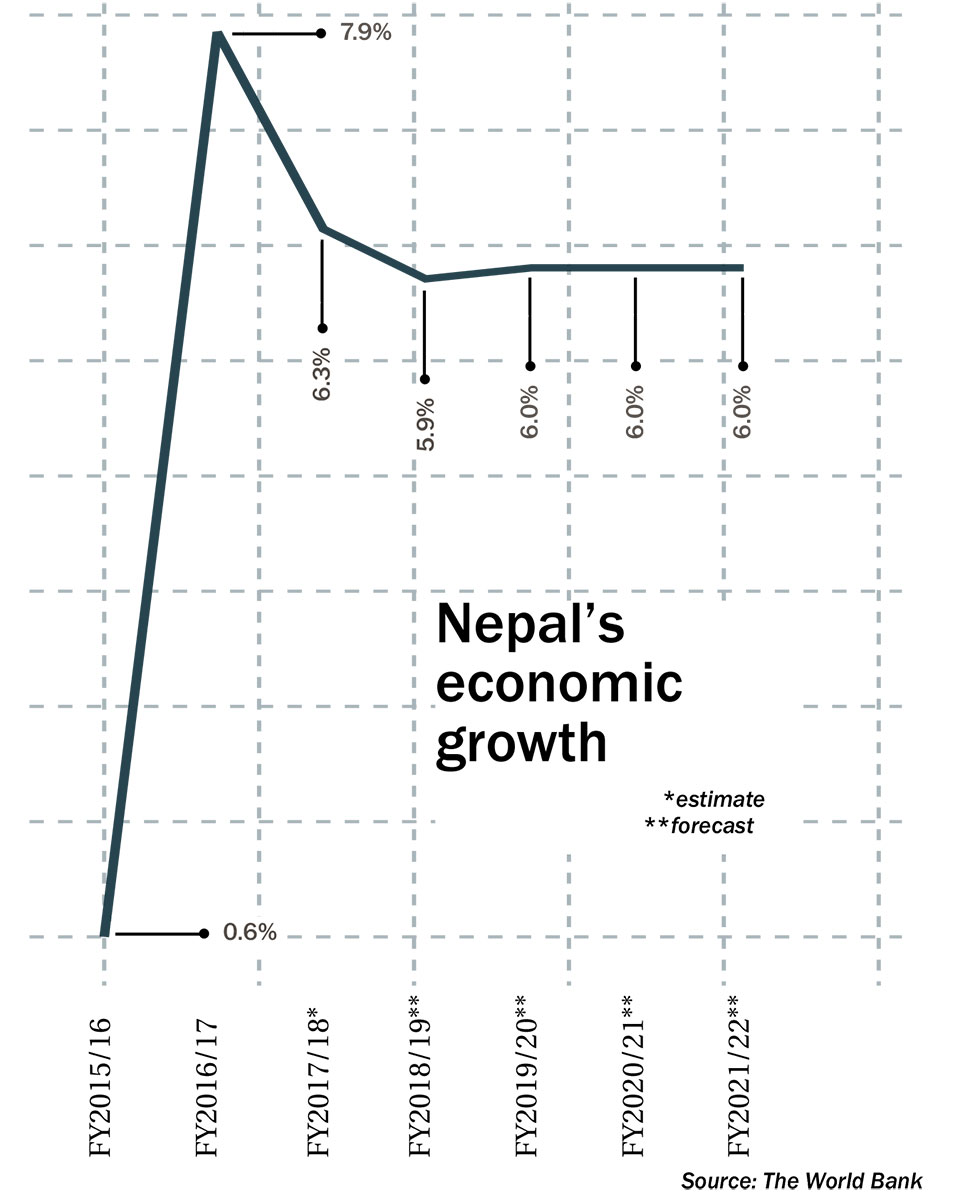 KATHMANDU, Jan 11: The World Bank has made an upward revision of Nepal’s economic growth projection to 5.9 percent in the current Fiscal Year 2018/19, up from its earlier forecast of 4.5 percent in June 2018.

However, the growth projection is lower than the economic growth rate that Nepal had achieved in Fiscal Year 2017/18.

In its flagship report ‘Global Economic Prospects’ released on Tuesday, the World Bank Group said that the growth is forecast to decelerate to 5.9 percent in the current fiscal year as Nepal’s strong post-earthquake momentum is expected to moderate.

According to the World Bank’s report, activity will be underpinned by strong infrastructure investment and consumption.

The World Bank Group, in its report, also projects continuous economic growth of 6 percent for the next three fiscal years.

In the last fiscal year, Nepal achieved an estimated economic growth of 6.3 percent, according to the bank.

On the economic performance of the country in the last fiscal year, the report said: “Less favorable monsoons led to weakness in agricultural activity, but this was offset by a recovery in remittances and robust industrial sector growth, particularly for manufacturing activities.”

The growth projection of 5.9 percent for the current fiscal year by the bank is, however, lower than the recent projection of the International Monetary Fund (IMF). In December last year, the IMF had made a growth forecast of 6.5 percent for Nepal.

Similarly, Asian Development Bank (ADB), in its macroeconomic update in September last year, had said that economic growth in the current fiscal year will likely be 5.5 percent.

The government has set an ambitious growth target of 8 percent for the current fiscal year.

Meanwhile, the growth in South Asian region is projected to accelerate to 7.1 percent in 2019 from 6.9 in the previous year. According to the report, over the medium term, robust domestic demand will continue to underpin growth, which is expected to average 7.1 percent.

“However, risks to the outlook are tilted down,” read the report. “On the domestic side, vulnerabilities are being exacerbated by fiscal slippages and rising inflation, and the possibility of delays in needed structural reforms to address weaknesses in the balance sheets of banks and non-financial corporate,” it added.

According to the World Bank Group’s report, key external risks include a further deterioration in current accounts and a faster-than-expected tightening of global financing conditions.

KATHMANDU, Jan 24: Nepal has secured its voting rights by deciding to purchase an additional 309 unit of shares in... Read More...

KATHMANDU, May 4: The government on Wednesday signed an agreement with the World Bank (WB) to get a loan of USD... Read More...