Won’t cede even an inch of Nepali territory: PM 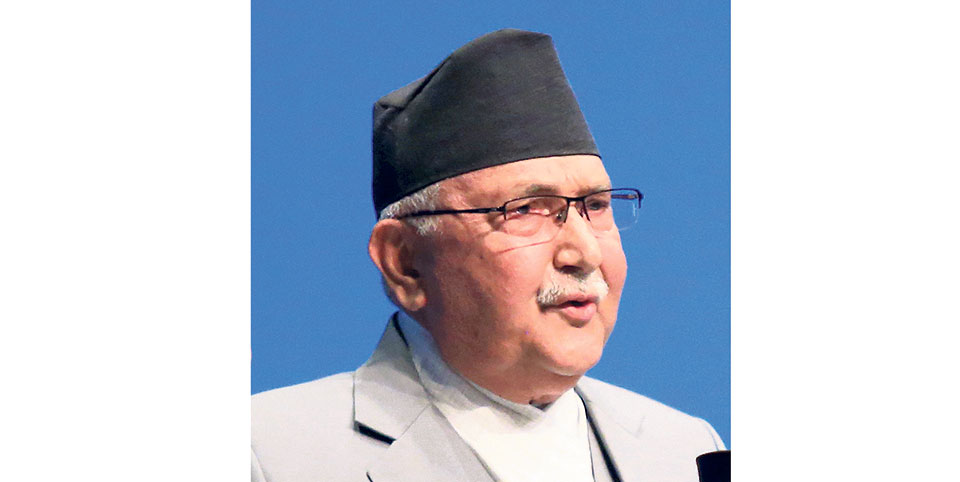 Urges India to withdraw troops from Kalapani
KATHMANDU, Nov 18: Prime Minister KP Oli has said that Nepal ‘will not cede even an inch of Nepali territory’ but clarified that the leftist government remains committed to resolving border issues with India through bilateral discussions. Addressing a convention of National Youth Association, the sister wing of the ruling Nepal Communist Party (NCP), in the capital on Sunday, Oli also urged India, albeit without calling name, to withdraw its troop from the encroached territory.

“This patriotic government won’t let anyone take even an inch of Nepali land. The neighboring country should withdraw its troops from our land,” the prime minister said.

Oli said that Nepal will neither encroach upon the neighbors’ land nor tolerate encroachment of its territories.

Students across the country have been taking to the streets protesting ‘Indian occupation of Nepali territory’ since  New Delhi on October 31 unveiled a new political map of India depicting some parts including the Kalapani area, Limpiyadhura and Lipu Lekh pass inside India. The map was released to show change in the internal boundaries of India in the wake of abrogation of Article 370 of the Indian constitution. Opposition parties and even some leaders from the ruling NCP have been lashing out at Oli government for failing to take up the issue with New Delhi. Nepali Congress President Sher Bahadur Deuba, who earlier grabbed headlines for asking Indian ambassador Manjeev Singh Puri to cede Kalapani, on Saturday said that the ‘pseudo nationalist communist government’ was incapable of raising the issue with India, let alone taking back the encroach land.

Prime Minister Oli said that some elements, whom he accused of remaining silent about border encroachment for decades, were resorting to ‘unruly and inappropriate activities to project themselves as extra-nationalist’.

Recalling suggestions from various quarters to correct the faulty and incorrect political map, Prime Minister Oli claimed that the reclaiming of the land was greater and more urgent priority to his government than redrawing the map.

“The government has everyone’s support on the issues of nationalism and national sovereignty. I would like to extend my sincere thanks to all for their support to the government. But in order to show you as extra-patriotic, it is inappropriate to carry out unruly activities. We would resolve the issue through diplomacy,” said Oli. The government has formed a taskforce to look into the issue and plans to formally raise the issue with New Delhi.

Kalapani has long remained a border issue between Nepal and India. The Sugauli Treaty signed between Nepal and the then British India, and following treaties with Independent India acknowledge Mahakali River as the boundary between the two countries. But India, given the geographic importance of the region, a tri-junction with China, occupied the Nepali territory across the Kali River since the 1960s, claiming a lesser known stream of the headwaters of the Mahakali river as the origin of the river and border line.

Nepal suffered a major setback when India and China agreed to develop Lipu-lekh pass, the shortest route to Manasarovar lake, a highly revered Hindu pilgrimage site in Tibet, as a trade route in 2015.