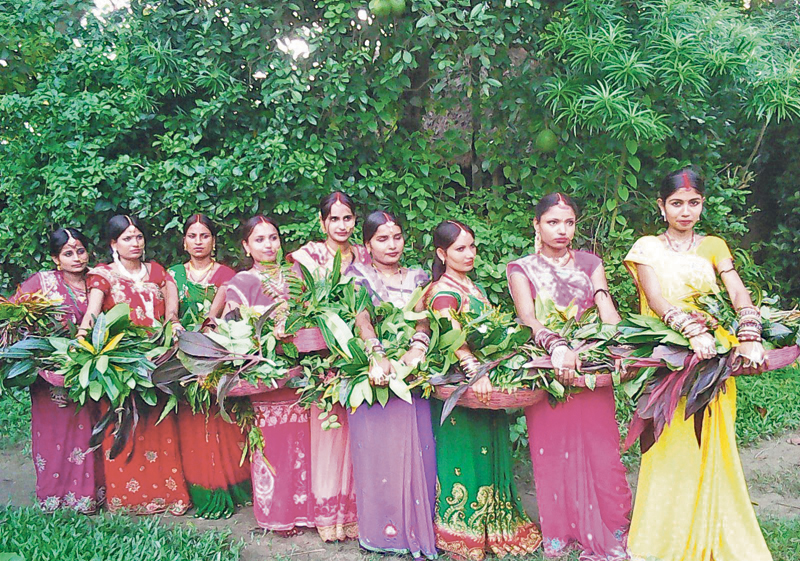 Women adorned in traditional Mithila attire head towards a pond in Tilathi, Saptari for offering Madhushravani puja on Monday.

RAJBIRAJ, August 2: Mithila culture is full of diversity in terms of tradition, rituals and life style. These traditions and rituals have made this culture a distinct one.

Shrawan is considered an auspicious month in Mithilanchal. It is here again and women in Terai region have been celebrating Madhushravani Festival festival since last week.

This ritual is for the newly married women who perform the Madhushravani Puja. Regarded as one of the major festivals in the southern plains it is celebrated in the month of Sawan (mid July - mid August) and last for around 15 days. This festival ends in Shravan Shukla Tritiya according to the lunar calendar.

“Mithila, as a whole observes a very vivacious and blissful moment during the entire festival period,” Meena Thakur, founding chairperson of the Maithil Women Council, said. “This festival is an integration of traditional dresses, rituals and singing.”

Starting a day before the Naag Panchami, the devotees refrain from consuming non-vegetarian foods, onions, garlic and salt throughout the festival time, Soni Jha, a local of Tilathi VDC-7 of Rajbiraj said.

Although this tradition is usually celebrated by newly wedded women belonging from Brahmin, Kayastha and Baisya castes, women from other cultural groups have also started observing this tradition of late.

[A woman listens to legends and stories related to Madhsravani while performing puja in Kohabar, Saptari on Monday.]

Pinki Jha, secretary at the Maithil Women Council, shared that the ritual they perform during this whole event is the most beautiful part of the period. “Throughout the event women clad in beautiful dresses, form groups and croon beautiful songs.” Jha informed that the rite to collect flowers, Juhi -Jahi, is the main attraction of the event where the groups visit houses to gather flowers as a token of love.

During the festival of Madhushravani, newly married girls stay at their parent's home where they consume delicious foot, wear adorable dresses and observer the rituals.

Another distinctive feature about this festival is that women have to read different holy stories every day.  Legends and stories related to Madhushravani festival are recited on the first and last day of the festival.  With stories, the devotees also recite hymns as a tradition.

On the last day, husbands present for the third time a vermillion powder as a souvenir. Before that, the bride is presented on the first and fourth day of the marriage.

“None in any place in the world, people celebrate such unique tradition.” Sadhana Jha, a women leader, shared. “With justifying traditional and religious values, this festival also portrays human values.”   Jha said that celebrating this festival means preserve cultural heritage and identity of the people.

Some women, however, have a gloomy take on this festival. On the last day, the women are made to play with fire on their thigh, which is called 'Temi' in local language, Rachya Chaudhary, a women journalist said. “Such cruel tradition must be ended.”  Chaudhary said that human beings should not be pushed into enduring such cruel rituals in the name of tradition.  “If we can transform some parts of the rituals in a pragmatic way, the festival could be even more meaningful for its followers” she said.

Karuna Jha, a poet, however shared a positive view of celebrating the festival. “In other cultures, they have honeymoon but in ours we have Madhushravani.”

Jha said that earlier married couple used to be kept together during the whole festival and were refrained from doing any household or professional work.  She elaborated that the festival also increases awareness about environment conservation. “Endangered plants such as Juhi, Jahi, Maina are used in the rituals to signify its importance in sustaining the culture.” She said that these endangered plants are being protected in the locality for their particular use in the Madhushravani rituals.

“Among all the festivals, I respect this tradition the most” Reetu Jha, a teacher by profession shared. “People have different take on this but I see this tradition holding a significant meaning to me from all sides.”

Worst times may be coming
2 hours ago