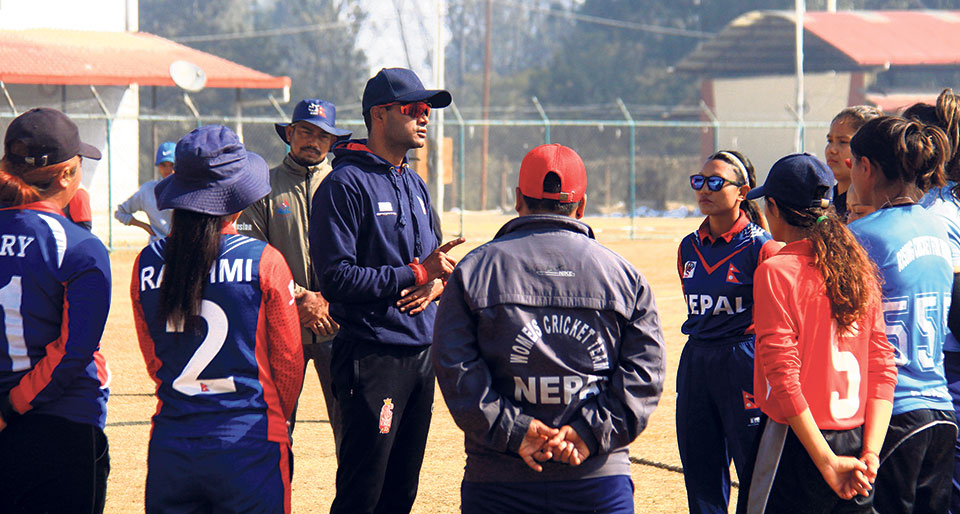 KATHMANDU, Jan 11: The selection committee of Nepal national women cricket team announced a 14-member squad to participate in T20 Smash, the cricket event hosted by Cricket Association of Thailand, to be played in Thailand starting on Saturday.

The closed-camp started on December 19 in Kathmandu for the T20 event which is taken as an ideal opportunity to prepare for the upcoming ICC Women’s World T20 Qualifier Asia 2019.

Skipper Rubina Chhetri will lead the team which includes four new players- Aarati Bidari, Dolly Bhatta, Kabita Kunwar and Bindu Rawal. “We have tried our best to prepare well despite the time constraints,” said Chhetri in conversation with Republica before heading to Thailand on Friday.

Chhetri further added that a special focus was given to match scenarios and fitness more than usual batting net sessions in the camp. “This time, we didn’t use the batting nets that much. We mostly prepared on the strategic aspects of the game and match scenarios. We have worked in match fitness which makes us believe to do well in the upcoming completion in Thailand,” said Chhetri.

The new head coach Binod Das, who is also leading Nepal’s age-level national cricket teams, stressed the importance of women’s cricket and its participation in international events is more than just formality. “In the past, participation in any international event used to be just for formality for women cricket team. And we used to console ourselves regarding the state of the apex governing body of cricket (suspended Cricket Association of Nepal) in Nepal.”

He said they have worked in fitness skills as directed by experts and specialist coaches. “Weakness on these aspects used to be our biggest drawback in previous editions along with batting. I think this time we have utilized the available time and resources in a best way,” he said.

Das believes the new players have strengthened the current squad and has given more options. “I am encouraged by the inclusion of new faces in the squad. From pace bowlers to leg-spin, we are expecting better performance from the new players and are hopeful that it will make our team more dynamic. Therefore, we are confident in performing better this time,” he added.

Similarly, the vice-captain of national team, Sita Rana Magar, is equally excited by the inclusion of new players who are passionate, confident and working hard to do well in their first ever international stint.
“The new players are like fresh air in this squad with their agility in the field and positive frame of mind. Like every one of us, they are also very passionate about the sport. Young players are bound to improve the squad, fitness and fielding wise,” she said.

Rana Magar said they will do their best to prove themselves as International Cricket Council (ICC) has a hope on Nepali cricket team despite that Nepal’s national cricket body is suspended.

“I am thankful for ICC for allowing us to participate in the international events despite the suspension of CAN and we take this opportunity to prove ourselves.”

Amrita Poudel will help head coach Das in the tour after being named as team manager, whereas Sakuna Dani is announced as physiotherapist.

Teams from Bhutan, Hong Kong, Indonesia, Malaysia, Tanzania, Thailand, SL Navy, Kuwait, and Namibia will participate in the upcoming T20 Smash. Nepal will start its first match on January 12 against Tanzania at the Terdthai cricket ground. It will also play against Namibia, Indonesia, and Kuwait as the tournament progresses. The final will be played on January 18.

Differences between the couple after engagement
29 minutes ago