With rare candor, Lovato chronicled her recovery and relapse 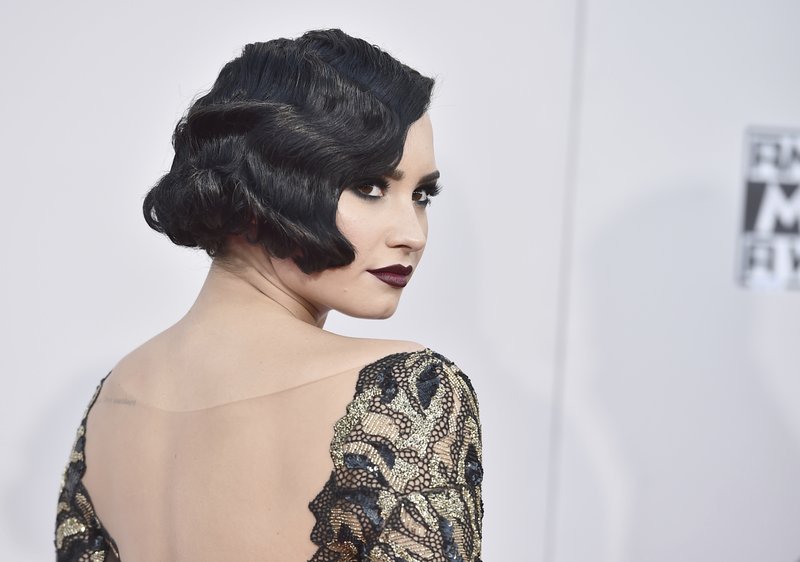 FILE - In this Nov. 22, 2015 file photo, Demi Lovato arrives at the American Music Awards in Los Angeles. Lovato has been an open book since she announced in 2010 that she was checking into a rehabilitation center to deal with an eating disorder, self-mutilation and other issues. In the next eight years, she became a role model and bona fide pop star, releasing multi-platinum songs and albums that range from playful to serious with lyrical content about her battles with drugs and alcohol. Her representative said Tuesday that the 25-year-old was awake and recovering with her family after the singer was reportedly hospitalized for an overdose. (Photo by Jordan Strauss/Invision/AP, File)

NEW YORK, July 26: While most celebrities tend to hide their struggles with drugs and battles with depression, Demi Lovato not only acknowledged her issues, she’s shared them with the world.

Lovato has been an open book since she announced in 2010 that she was checking into a rehabilitation center to deal with an eating disorder, self-mutilation and other issues. Over the next eight years, she became a role model and bona fide pop star, releasing multi-platinum songs and albums that range from playful to serious with lyrical content about her battles with drugs and alcohol.

“(She) has found enormous success by addressing those issues, and not only addressing them when they were still fresh, but also continuing to speak about them as she had been sober for years. She’s always kind of keeping it at the forefront ... and showing people that it’s OK to be open about having struggles whether it’s mental health issues, substance abuse (or) body positivity,” said Jason Lipshutz, the editorial director at Billboard. “By opening herself up and sharing herself she has given the signal to a lot of people — either young listeners or adult listeners — that they can do the same.”

“Obviously she’s got an amazing voice and she’s got some great hooks and a lot of hit singles, but I think people really connect with that type of openness,” he added.

Lovato’s representative said in a statement Tuesday that the 25-year-old was awake and recovering with her family after the singer was reportedly hospitalized for an overdose. It came a month after she released a new song called “Sober,” indicating that she relapsed after six years of sobriety.

Lovato has chronicled her life and battles throughout the years, from her bisexuality to being bullied as a child to suffering from depression. She has said she’s used cocaine before interviews and drank alcohol in the morning out of a soda bottle to mask it. That candor has helped her become a role model for young women and men who have faced their own issues.

Actress Lili Reinhart, who appears in the hit CW Network series “Riverdale,” said she looked up to Lovato.

“When I was 14, she was an idol to me in how she spoke so openly about mental health. And now she continues to inspire thousands of young men and women with her body positivity messages,” the 21-year-old tweeted Tuesday.

In her YouTube documentary, “Demi Lovato, Simply Complicated,” Lovato said at one point she idolized Amy Winehouse, whose seven-year death anniversary was Monday.

The last two years have been Lovato’s biggest in music: “Sorry Not Sorry,” the sassy, punchy pop song, became the entertainer’s biggest hit of her career, peaking at No. 6 on Billboard’s Hot 100 chart and reaching triple-platinum status. Her “Confident” album competed for best pop vocal album at the 2017 Grammys (she lost to Adele’s “25”). Lovato earned praise and more hit songs for her collaborations with the electronic music groups Cheat Codes and Clean Bandit. And she’s even expanded to the Latin market with the Luis Fonsi collaboration “Echama la Culpa” and the Spanish version of “Solo” (Lovato is of Mexican descent).

But her latest release, “Sober,” was concerning since Lovato had said she was clean for six years.

“I’m not sober anymore,” she sings. “I’m sorry that I’m here again, I promise I’ll get help/It wasn’t my intention, I’m sorry to myself.”

“We should wrap our arms of love around Demi Lovato. I am so happy you’re alive. Thank God,” Lady Gaga tweeted. “If I know my monsters as well as I believe I do, we all wish you self-compassion and inner peace. And may you receive the love so many have for you.”

Lovato started as a child star on the series “Barney & Friends,” later breaking through as a teen on the Disney Channel film “Camp Rock” and the network series “Sonny with a Chance.” She did not return for the third season of “Sonny” after checking into rehab in 2010, also leaving an international tour with the Jonas Brothers.

She emerged with the album “Unbroken” in 2011, detailing her recovery in the ballad “Skyscraper.” More songs like that followed as Lovato toured the world and reached new heights on the pop charts.

There was a worldwide outpouring of support for Lovato as the hashtags #PrayForDemi and #StayStrongDemi trended heavily on social media and everyone from Bruno Mars to Ariana Grande to Ellen DeGeneres to Justin Timberlake rooted for Lovato’s recovery.

“I think everybody just wants her to be OK and there’s no feeling that I can perceive of (people saying), ‘How dare she?’ or anything like that,” Lipshutz said. “People are understandably concerned and I think that no matter what happens next people are going to be supportive of her.”

Flood-swept rhinos brought back to Nepal

CHITWAN, Dec 17: The world’s rare wildlife, one-horned rhino, has been brought back to its home on a boat. ... Read More...